“I never worried about driving at 200 miles per hour, but when I see my son on the track, of course I worry. And when my grandson is behind the wheel, I’m just like every other grandparent— I take a deep breath and remember that he knows what he’s doing.”

During his career, he won a total of four Champcar titles, and the 1978 Formula One World Championship.

Mario Andretti is the only person ever to win the Indy 500, the Daytona 500 and the Formula One World Championship.

His name has been so synonymous with racing that policemen still ask speeders: ‘Who do you think you are, Mario Andretti?’

“My entire career spans maybe 38 years and how much time was I able to spend with my family? There were many picnics I missed. When my kids were playing soccer, I was working. On the main holidays, you’re working,” he says.

“Now I get to see the joy my wife gets out of our grandkids. We have five of them, three girls and two boys. We now, the latest really live for them. I’ve taught them how to play tennis   and water ski.

“I think I may enjoy even more being a grandfather because I’m probably catching up on some of the things I missed with my own kids at their age.

“People ask me, ‘how do you teach someone to go fast?'” he says. “You can’t. It has to be inside your belly. You either have it or you don’t.” 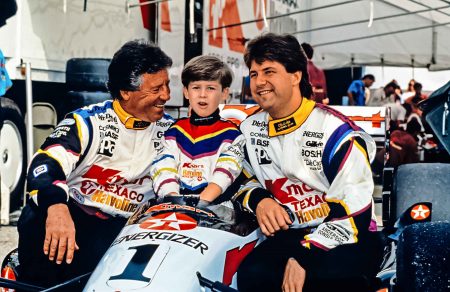 Mario, Michael, and Marco Andretti when he was 9 years-old.

Now, the latest Andretti to carry on the family legacy is 19-year-old Marco, who has been involved in racing since he was nine years old.

He recalls first wanting to race after seeing his father win the PPG Cup in 1991. In 2003, in his rookie season in open-wheel racing Marco won the Skip Barber Eastern Series Championship.

Andretti’s career as a racing star was improbable from the start. He was born in a small town called Montona in Italy (now Croatia). His family fled the country in 1948, spent seven years in a displaced persons camp where they lived in one-room with several other families, and, even though they didn’t speak English, and eventually settled in Nazareth, Pennsylvania with $125 in their pockets.

Andretti and his twin brother, Aldo, were 15-years-old when they came to America. Both were very interested in motor car racing back home in Italy. This is where the American dream began to come true for Mario.

With pluck and luck, the two teenagers managed to build a car— a 1948 Hudson Hornet Sportsman Stock Car. Andretti began his racing career in 1959.

When Mario retired at the end of 1994  at  the  age  of  54,  he  had  been named  “Driver  of  the  Year”  in  three different decades. He had become the only driver ever to win races over a period of five decades and was named “Driver of the Century” by the Associated Press in 2000.

Since his retirement, Mario has found another passion-his vineyards. 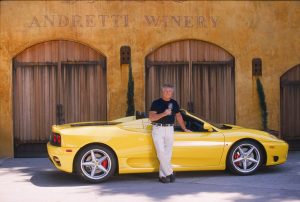 The winery, established in 1996, produces wines from the Napa Valley,

The winery, established in 1996, produces wines from the Napa Valley, three of which are very limited production estate and reserve classified wines under the Montona label. These limited   wines are available only through the Andretti winery tasting room and are not found in general distribution.

His grandchildren are part of his plans for the future, perhaps even turning the vineyard over to them at some point.

“I think it will be a natural transition rather than a planned one. Hope- fully, I’ll be able to hand it down to them. It’s all part of change. I’ve learned to slow down a bit, to deal positively with change.

“I like to think I stay open-minded,” says Mario. “I think I have a very optimistic outlook on things. It may sound overly simplistic but I like to see the glass half-full rather than the opposite.”