GRAND Magazine: Be A Positive Resource For Grandparents

GRAND Magazine: The #1 resource for grandparents

GRAND is much more than a magazine. it’s a multi-media tool for today’s grandparents, grandchildren and parents.

Since 2004, GRAND’s mission has been to help new and veteran grandparents. We provide relevant content, resources and inspiration to help grandparents navigate the grandparent life stage.

GRAND Magazine provides a voice for all grandparents including those special “encore” parents who are raising their grandchildren. GRAND is also for grandparents who may be forced to seek legal help to just be in the lives of their grandchildren. We serve the needs of all family members from early childhood through adolescence, adult, mid-life, matures through end-of-life.

GRAND Magazine has featured celebrity grandparents on its cover to illustrate that the old stereotype of grandparents no longer applies.

In addition to our regular contributors, many ever-day grandparents and experts contribute to GRAND. 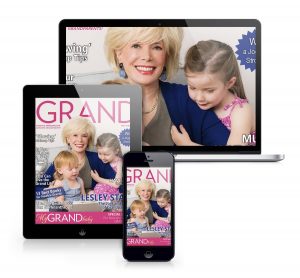 From 2004 – 2008 GRAND was a print magazine distributed nationally. Since 2009 GRAND has been delivered exclusively in digital format. Thanks to our partner, Nxtbook Media, GRAND is a state-of-the-art digital magazine with an app to read GRAND anytime anywhere . In 2014 GRAND joined forces with the top websites for grandparents and formed The Grandparents Network.