So far, no such luck. And as the years have worn on, my brothers and my collective shrug at the idea of parenthood has become an increasingly common, and pained, topic of conversation at family functions. My father, for instance, has developed a canned defense mechanism for when questioned why he alone among his seven brothers and sisters is still without grandchildren. “I just gave up and decided to have my own!” he jokes, in reference to my 12-year-old brother, Alex.

Being “the gay one,” moreover, has earned me no leeway whatsoever with my obstinately progressive parents. “You know you can always adopt,” my mother says as if my ignorance of that option was the only thing standing between her and a Brangelina-size brood of grandchildren. “Just like those cute gays on ‘Modern Family’!”

So naturally, of all the countless questions that arose for me after my friends, Tori and Kelly, asked me to become their sperm donor, the impact it would have on my parents was the most central to my decision-making process. Yes, my donating would officially make them grandparents, but with a big fat asterisk next to the title. Being a “biological grandparent” just doesn’t have the same ring.

A surprising number of people in my life questioned whether I really needed to inform my parents at all. Couldn’t I just casually forget to mention it? Wouldn’t it be easier for everyone if my family simply never knew? But I would never feel comfortable donating without my family’s total knowledge and consent; this is their DNA we’re talking about, too. Also, I’m a horrible liar. I’m sure I would be tortured by the secret until I blurted it out in some grand, inappropriate fashion at a family gathering — Thanksgiving dinner, perhaps, or a funeral.

Fortunately, I didn’t have the opportunity to even consider the option. Tori and Kelly would never have agreed to keep my family in the dark. They opted for a known donor for a reason, after all: to provide their children with the opportunity to know and have a relationship with their genetic father and his family. From their perspective, allowing my family to play a role in their children’s lives can only be a good thing. “The more love our children receive, the better,” Tori often says. Why not have a few more loving adults around to spoil their children rotten?

While this it-takes-a-village sentiment is certainly appealing, my family’s involvement in Tori and Kelly’s daughter’s life will still be different (will be lesser) than if I were raising a child myself. This certainly won’t be intentional on anyone’s part; it’ll just be a natural byproduct of our donor arrangement. If I were acting as a full-time father, my parents would have free rein to do the things that grandparents are wont to do: offer unsolicited parenting advice, drop in unexpectedly, or guilt-trip me into bringing the children home for the holidays.

Being the type of people they are, my parents readily gave their consent when I finally worked up the nerve to broach the subject. “Of course!” my father exclaimed loudly. “I’m supportive of anything that eases the ability of the L.G.B.T. community to have children,” he added, like a politician giving an official statement on the matter. My mother, for her part, has been furiously crocheting baby blankets ever since she heard the news (we’re very crafty in Utah) and has bought out what seems to be the entirety of Babies “R” Us several times over.

I’m thrilled my parents are so excited, but I find myself in the position of managing their expectations. I decided to donate not for our own benefit, I remind them, but so my friends could start their family. We will play a role — likely a meaningful one — but we also need to follow Tori and Kelly’s lead. My parents understand this and are nonetheless supportive. Still, I can’t seem to shake this annoyingly cheerful adage that has been stuck in my head since this whole thing began. It says, “Perfect love does not come along until the first grandchild.” I can’t help but think that, in some ways, this experience is just a little bit less than perfect for my parents.

But I also seem to be the only one much concerned about all this. Tori and Kelly are nothing but encouraging of my family’s involvement, and my parents are excited to play any role they can. And regardless, I probably shouldn’t give much credit to a saying I most likely saw stitched on a pillow somewhere back home in Salt Lake City.

At the very least, I think I’ve earned the right to call in a favor or two from my brothers. Even if this isn’t quite what my parents had in mind, I figure I’ve bought us all a good couple of years free of the grandchild nagging. 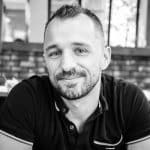 David Dodge is a writer living in New York City. You can read more of his work at www.bydaviddodge.com or follow him on Twitter:@dodged01. His friends, Tori and Kelly, are expecting their first child this summer. Sperm Donor Diary will run on Tuesdays in Motherlode through the end of July.