9-11 – Grieving In The Wake of Terrorism

9-11 – Grieving In The Wake of Terrorism

September 11 is my birthday.  Until September 11, 2001, it had been a non-event.  Nothing special.  Business as usual topped off by an expensive dinner that could only be justified as a once-a-year commemorative extravagance.

For all my birthdays to come I will remember September 11 as the day America quaked from the impact of cataclysmic terrorism in New York City, Washington, DC and a tiny hamlet outside of Pittsburgh, PA.  The day our country learned that the strongest nation in the world is vulnerable to deadly stealth.  The day patriotism and prayer returned to our public life, if not to our public schools.  A horrific day of relentless, incomprehensible, incongruous images that made us gasp and cry and curse and pray, all between breakfast and noon, leaving the afternoon and the rest of our lives to deal with the loss of innocence and the struggle for moral equilibrium.

For the few minutes it took two Manhattan spires of freedom and commerce to topple to the ground in a heap of incinerated carnage, and the world’s seemingly impenetrable fortress of military prowess to rupture flame and blood, the United States and its people were defenseless prey.  Too shocked to believe.  Too shaken to rally.   Too numb to grieve.

Long before the sun set on September 11, over 270 million Americans and millions of our freedom loving neighbors on this cosmic pebble were gripped by fear and anger.  Fear of the worst our imaginations could conjure.  Anger at a murderous extremist cult, and at ourselves for permitting satanic fanatics to take advantage of our complacency and rob us of our illusions.

As the waves of black, acrid smoke rolled over Lower Manhattan, five-digit estimates of casualties were painfully etched into the nation’s psyche.  And when the impersonal calculations from the three terrorist sites were translated into very personal pictures and stories of horror and heroics, we began to grieve the loss of husbands and wives, mothers and fathers, sons and daughters, family and friends.

Grieving is natural, universal, primeval.  A complicated process that usually follows an erratic progression from intense emotional pain and despair to gradual emotional repair and hope.  Initially, however, grief can be a tumultuous mix of feelings – love, sadness, fear, anger, relief and even happiness – that confounds those experiencing it and frustrates those who are trying to be understanding and supportive. 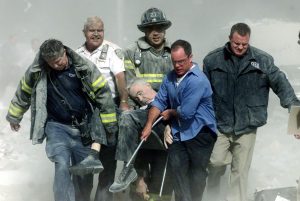 A mother in one of the grief counseling sessions our firm facilitated a few days after September 11 tearfully admitted to herself and her co-workers that she hadn’t been able to sleep because of deep seated feelings of guilt.  Guilt over her relief that her son had gotten out of Tower Two in time.  Guilt because the husband of a close friend had not.   Her tears turned to uncontrollable sobbing as she imagined the immense void left by the sudden death of her friend’s husband.  She was inconsolable as she contemplated her own bereavement if her only child had not been able to escape the rubble.  She grieved for her friend and herself.

In another New York City session, a man whose office was several blocks away from Ground Zero claimed that he had been shaken initially, but was in control again, ready to get back to work and on with his life.  He didn’t need to be in a grief session, he insisted.  Minutes later, his macho façade had evaporated and he spoke softly and painfully about his fears.  Not far from his safe haven, several friends and acquaintances had lost their lives, leaving young families and unfulfilled dreams.  His small children were playmates with a few of the youngsters waiting in childcare centers for moms and dads who would not return to take them home.  In an instant, his anguish turned to rage and he hammered the table with his clenched fists cursing God and the maniacs responsible for the senseless cancellation of innocent lives and dreams.  The makers of widows and widowers and orphans.

Tens of thousands of people’s working lives have been indelibly affected by September 11.  In the days following the tragedies, it was common to hear people say, I feel guilty laughing, or having a good time, or enjoying my family. In most cases, normal, painful feelings have been suppressed.  Managed because of necessity or embarrassment.  Masked because we think we know how we are expected to behave, especially under stress.  Strong.  Stoic.  Unbending.  Dry eyed.

September 11 has become a bloodstained bookmark in the chronicle of civilization.  Our lives are being defined daily by the savage assault, and the debate over the price of safety and security as a percentage of our wealth and of our individual freedoms continues unresolved.

Our nation has grieved before, but seldom on the scale of 9/11. And never

before with the certain expectation that an unseen enemy will strike at us again,

Whenever and wherever terrorism occurs again, its repercussions will be felt in

offices and plants and laboratories and classrooms throughout the land, no

matter how distant from the next Ground Zero.

This article was originally published in the fall of 2001.

Richard J. Anthony, Sr. is founder and managing director of The Anthony Group, Inc., and founder of The Entrepreneurs Network.  His eldest son was supposed to be in New York City on September 11, 2001, for a meeting at AON’s offices in the Twin Towers.

Thankfully, his plans changed. He lived to mourn his colleagues who perished.