By Michael B. Schulman

On February 4, 2016, my grandson who lives on Grand Cayman Island, had to have cardiac surgery.  At the time, he was just short of six months old. We learned that his Innominate Artery was pressing against his trachea and interfering with his breathing.

At first, everyone thought it was croup.  However, when he did not respond to medication, further testing was done that revealed this condition.

The surgery was performed at Miami Children¹s Hospital.  Remy remained in Pediatric ICU for a few days and my wife and I were at the hospital with our daughter Melissa and son-in-law, Jared. The baby was released after five days in the hospital.  Since my daughter, son-in-law and grandson live on Grand Cayman, they stayed in Palm Beach Gardens, Florida at the home of my in-laws, so that they would be nearby for the follow-up. 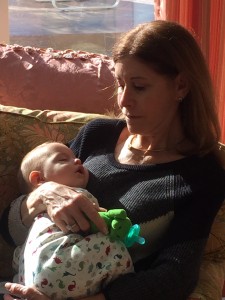 My wife Linda and grandson Remy. Photo taken when we arrived at my in-laws.

Remy is now doing fine.  As I tell people; because he was only six-months-old, he will never remember and we will never forget. He is no worse for wear, and the entire family aged 10 years a piece.

Editor’s Note:  I was especially struck by this submission as my husband and I prepare to leave for California tomorrow to be at Stamford Medical Center as our eight-month-old granddaughter is having lung surgery.

What you should know about Pediatric Intensive Care

It can be frightening whenever kids are in the hospital – and even more so when they’readmitted to the pediatric intensive care unit (PICU). But a basic understanding of the people and equipment in the PICU can help you feel less scared and better prepared to help your child recover.

The PICU is the section of the hospital that provides sick children with the highest level of medical care. It differs from other parts of the hospital, like the general medical floors, in that the PICU allows intensive nursing care and continuous monitoring of things like heart rate, breathing, and blood pressure.

The PICU also allows medical staff to provide therapies that might not be available in other parts of the hospital. Some of these more intensive therapies include ventilators (breathing machines) and certain medicines that can be given only under close medical supervision.

A Lady I Admire - An Essay on Advocating Justice

The Not Old Better Show

Toys & Tech - From Minecraft to Play-Doh