When media mogul Pat Mitchell was a young girl, she was imbued with her grandmother’s teachings. The favorite was this gem: “Even if you fall on your face, that’s a good first step because at least it’s forward movement.”

And move forward she did – indeed. Pat’s a trailblazer and a relentless advocate for making the world a better place. She was the first woman to serve as president and CEO of PBS. She’s also the former president of CNN Productions, where she was executive producer of hundreds of hours of documentaries and specials, some of which received 35 Emmy Awards and five Peabody Awards.  Currently, she is president and CEO of Pat Mitchell Media and TEDWomen.

Even with all of that, Pat reports lovingly her favorite credential is being a grandmother – and as with everything else in her life, she’s done that in a big way. She has 12 grandchildren!

She says she and her husband Scott have been fortunate enough to experience the joy of having their sons and daughters and their spouses and offspring join them in uniting into a “loving, generous, open-hearted family.” And no matter what else Pat is involved in, she makes the most of the time with those grandkids, ranging in age from 2 to 26. 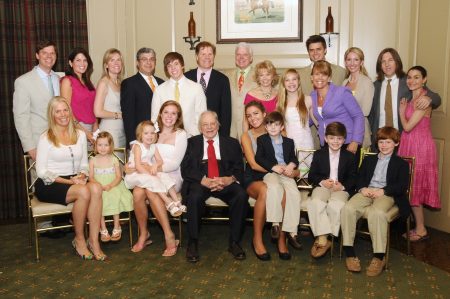 Pat surrounded by her beautiful family

Part of Pat’s inspiration for her role as a grandmother is the relationship she had with her own grandmother who was part Cherokee and Creek. Her grandparents owned a small cotton/tobacco farm where Pat lived until the age of three while her father was serving in the military during WWII.

“My grandmother hadn’t had many experiences outside of Georgia, yet somehow she was able to create and tell wonderful stories,” Pat recalls. “Those stories inspired me to explore.”

“In those days, my definition of success was putting food on the table and keeping a roof overhead for my young son and myself.”

Pat’s grandmother taught Pat to believe in herself and not to be afraid of making mistakes. That advice was put to good use when Pat made the bold decision to pursue her dream of a career in media. It wasn’t easy. After college, Pat did “the expected things” – married and had a child. But the marriage wasn’t working so Pat left college teaching positions, first in Georgia then Virginia and accepted a position as a writer for LOOK magazine in New York City.

“In those days, my definition of success was putting food on the table and keeping a roof overhead for my young son and myself.” Within months of arriving in New York and landing a job as a magazine writer for LOOK magazine, the magazine went out of business and Pat found herself unemployed. Through sheer persistence, she secured a job as a TV reporter. From there, her career and her sphere of influence grew – but not without some hurdles to jump along the way.

Women in TV news in the 1960s and 1970s were faced with a multitude of obstacles. “There were only one or two women at each of the networks – and we were told we needed to compete with one another.” Her definition of success at that stage involved proving she could do the same job as her male counterparts. 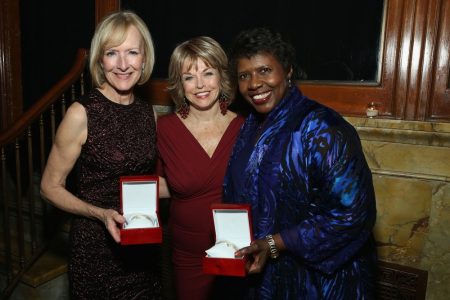 Pat (center) with Judy Woodruff and Gwen Ifill of NewsHour.

For the next three decades, Pat worked in front of the camera as a news reporter and news anchor, national talk show host, and White House correspondent, as well as behind the camera as a creator and producer of documentaries and series. In the mid-’80s, she established an independent production company to create, produce, and host programs focusing on women, including the Emmy-award-winning daytime series, “Woman to Woman,” which was the first national program produced and hosted by a woman. 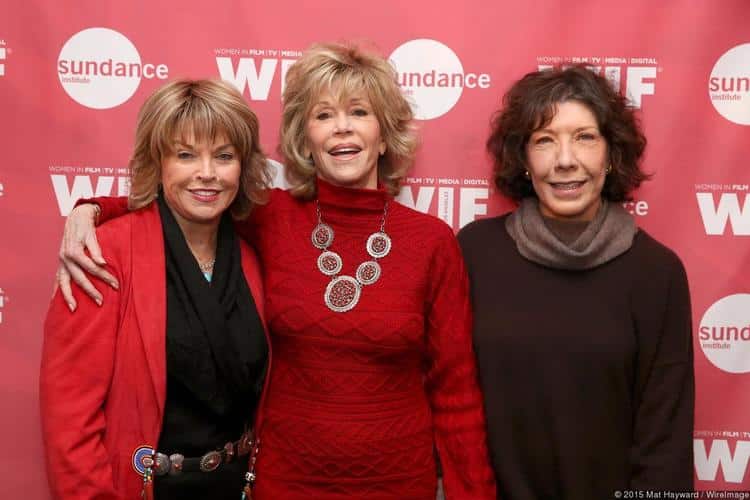 Pat finds it ironic – and disturbing – that the progress for women has been painfully slow in the media industry. Although there are more women in news, women still don’t for the most part own or lead media companies. And, Pat is concerned about the overall state of news in our country.

“We can’t have a democracy without independent media, which is the single most powerful force influencing what we think and how we see our world.”

For Pat, the need for robust public media, such as PBS and NPR, is a critical issue and a component of her larger mission to solve some of the world’s problems – in part to improve the world her grandchildren will inherit.

“That is where grandparents can play an important role. Our relationship with our grandchildren isn’t obligatory – it’s a choice. And if we can help them develop values that will serve them well in life, that’s what matters most.”

It all started in 2010, when I approached TED’s chief curator, Chris Anderson, with the seed of an idea. In talking with Chris, and with the amazing team of women at the TED organization, we came up with the idea for TEDWomen, which we launched in the winter of that year in Washington, D.C. 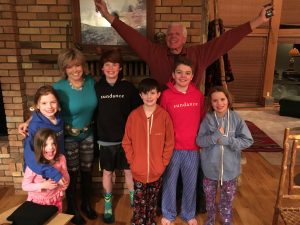 Cottage at Sundance with grandchildren L-R Lizzy, May, Pat, Cole, John & Stella. Pat’s husband, Scott, in the back.

Just as her grandmother did for her, Pat works lovingly to inspire her grandchildren to have self-confidence. When asked which three essentials she believes her grandchildren will need to thrive in the future, Pat answers without skipping a beat.

“First, they need to be informed. Before any problem can be solved, people need to understand why there’s a problem.”

Next on her list? Persistence – the willingness to fail and try again. Remember what her grandmother said about falling on your face being forward movement?  Pat still believes that wholeheartedly. 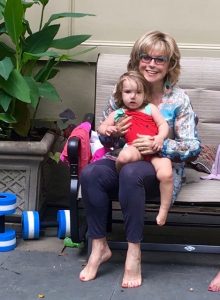 The third essential Pat sees as vital is for young people to identify personal values and to turn to them for guidance.

“That is where grandparents can play an important role. Our relationship with our grandchildren isn’t obligatory – it’s a choice. And if we can help them develop values that will serve them well in life, that’s what matters most.”

About the Author – Cheryl Harbour