The Legacy of the Harmonica and the Chocolate Sandwich

My maternal grandparents died before I was born. Their memories are found in sepia photographs, faded black and white Polaroids, and ephemeral oral histories.

My paternal grandfather, diminutive with a perpetual smile, was a factory machine operator who made leather belts. He was a self-taught harmonica player who could toot and riff old Yiddish and American folk songs. My grandmother, a housewife who raised four sons, was stricken with early onset Parkinson’s disease, a condition that defined her. I recall she ate milk chocolate bars wedged inside Kaiser rolls for lunch, hated to cook, and was a skillful Diabolo player. Our conversations were unmemorable, superficial, and polite at best.

My children grew up with grandparents being a big part of their life. They were blessed to know four grandparents who cared to know the details—shoe sizes, AP courses, favorite clothing stores, and Instagram usernames. My children recognize the precious legacy of a grandparent’s wisdom

Call out: Perhaps it’s this simplicity that leaves an indelible mark

Lately, subtle stirrings of my grandparents’ indelible imprint have surfaced in my consciousness as I embrace a life that includes juggling career, husband, children, grandchildren, and elderly in-laws.

My three-year-old grandson and I play marathon games of hide-and-seek. The hiding spots and his shrieks of surprise at being found are always the same. He teaches me the yoga banana pose. I help him write picture books we will share one day with his baby sister. He examines the dry patch on my elbow with great curiosity. I teach him its correct name—psoriasis—and add that it sounds like a dinosaur.

Perhaps it’s this simplicity that leaves an indelible mark and is all he will need to know about me after I’m gone. I am the harmonica, the bread and chocolate bar sandwich, and hide and seek player.

(A version of this article originally appeared in midcenturymodernmag.com) 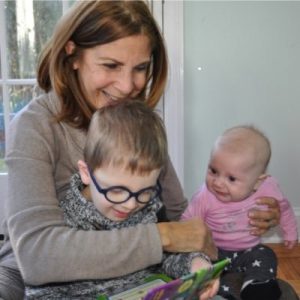 Emmi with her two perfect grandchildren

Emmi S. Herman is the mother of three millennials and grandmother of two perfect grandchildren. She is a children’s book author with expertise in early literacy skills. Her book “Mime Time” is due out in 2018 (Heinemann). When not writing copy at her day job, or at work on a memoir about her sister she is in her car somewhere between New York and New Jersey.