According to Babycenter.com, the following are the most popular grandparent names.

If you’d like to add your grandparent nickname to our list, just click here. Sometimes we get to decide our GRANDparent names. More often, an infant or toddler decides what we will be called for the rest our lives. We http://www.grandmagazine.com/grandparent-nicknames/ay want to be called grandma or grandpa, but we also have many other choices. If you’re looking for more fun grandparent nicknames, check these out In its article Celebrity Grandparent Names, grandparents.com outlines an interesting list of what the rich and famous grands come to when they’re called. They don’t say where they got the information, but it’s interesting, to say the least.

“We know these popular celebrities by their stage names and starring roles, but their grandkids call them by a different name,” the article states, adding that Goldie Hawn, of course, goes by Glam-ma, Joan Rivers was Nana New Face and Sharon Osbourne is Shazza. President Donald Trump is, they claim, not surprisingly Mr. Trump.

In her article, What’s in a Grandparent’s Name? A simple name on your grandchildren’s lips could melt your heart, Beverly Beckham writes, “I’ve heard the names my whole life: Grandma, Grampy, Mimi, Bube, Grandpa, Papa, Nonna, Nonny, Nana. Grandfather, Grandmother. But I never knew these names were magic until one was said to me.”

She continues, “It was Nana that I called my grandmothers, Big Nana and Little Nana, because that’s what they were, not just in size, Big Nana as wide as she was tall and Little Nana petite and delicate, but in temperament, too, and in presence. Little Nana dyed her hair red and painted her fingernails the same color as her lipstick. She got dressed up, heels and all, just to hang out the laundry. Big Nana never wore heels. She wore shoes with ties and cotton house dresses and a serious expression, even when she was telling a funny story. She worked as a waitress at a bar about a mile from her flat and when she was in her seventies and the Boston Strangler was stalking women her age, she refused to be cowed by fear and despite my parents’ pleas, continued to walk to and from her job every night.”

“I’m PeePaw and PaPa too, all the way to the bank. They say it with a smile and love in their eyes.”

Beckham questions her use of Big and Little. “Did I give them these names? Or did my parents? I wonder now if they loved them if big meant what it did to me — significant, prime, imposing. And if Little Nana knew she was as pretty and delicate as a butterfly.”

Beckham said, for her own grandma moniker, she picked Mimi. “I love the word. Mimi. I love hearing it and saying it and writing it and thinking it. It is my favorite name ever.”

Young and old alike are torn between who should name grandparents. Some think the grandparent should choose. Others maintain it’s a grandchild’s right.

Ronnie Amos is proud of his title with his grandchildren. (He made it up himself.) “I feel that the grandparents should be able to pick the name they want to be called by their grandchildren,” he said “Every time I walk into the room or the house I say, ‘Fee fi fo fum,’ therefore I am Bigfoot the Gentle Giant. I love it.” But he will come to whatever they call him. “I’m PeePaw and PaPa too, all the way to the bank. They say it with a smile and love in their eyes.”

Patty Hoeckelmann does not agree. “You do not make them up,” she said. “You just wait and see what they call you. I always said grandma to the grandgirls and they got maw maw out of that. It is much more fun if they make it up.”

Still, according to Babycenter.com, it’s wise to choose a base name until the baby picks one of his or her own. “Even if you or your child’s grandparents have chosen the perfect name, there’s no guarantee it’ll stick…you’ll need something to call the grandparents while you wait for your child’s creative juices to start flowing,” says Evonne Lack in Choosing Names For Your Child’s Grandparents. That’s exactly what Margie Smith did, whether she planned it or not. Smith’s oldest grandson gave her her grandparent name. Then two of her other grandchildren changed it. In the end, she doesn’t care what they call her, as long as they call. “Grandkids come up with the name they feel comfortable calling them the rest of their lives. I always knew the grandkids would come up with the name they wanted to call me. I’m Mamaw. Tyler started it because it was easier for him to say. As the kids have gotten older they have changed it to Mams. I think Matt and Zac started that. Both are better than being called old lady.” Smith has 13 grandchildren, ranging in age from 11 to 30. She has two great grandkids. She said her family that started with two – her and husband Leo Smith – has grown to 24. And she wouldn’t have it any other way.

Sometimes the grandkids wait for no one. “My brother, at about 18 months looked at our grandma pointed, and said ‘Bubba!’ and she was Bubba till the day she died,” said Becky Sigmund of her dad’s mom, Dorothy Donahue, who passed in September 2009 at 83 years old. 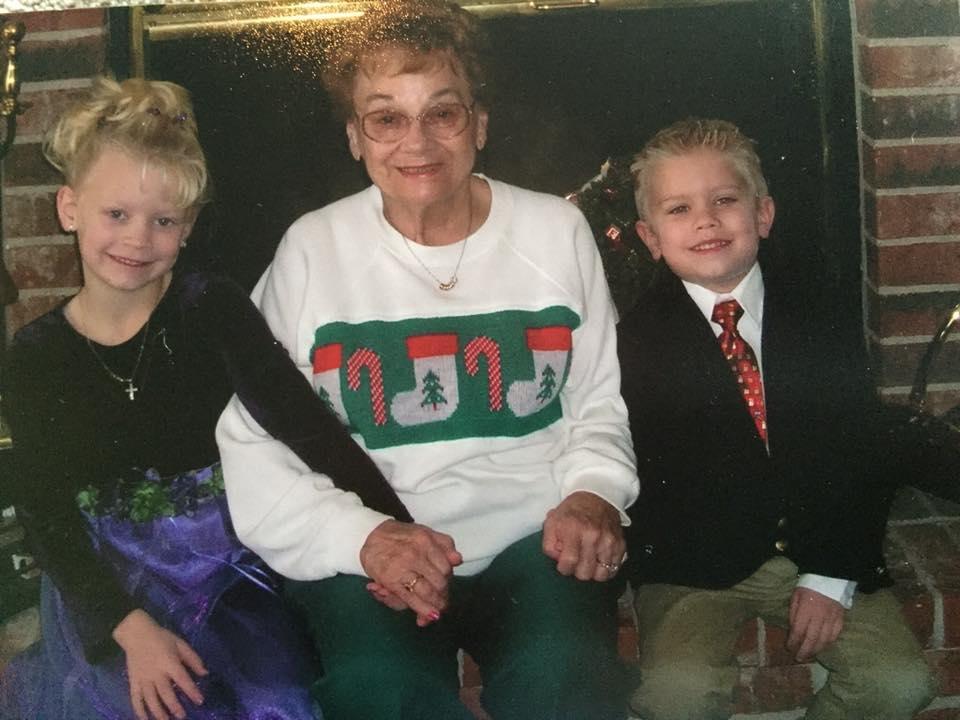 Olivia Sigmund, the late Dorothy “Bubba” Donahue, and Will Sigmund.

Dolly Hickey is “Grandma Dolly” to her four grandchildren. But who wouldn’t be with a name like Dolly? She said her grandmother was mangie (mang yee). “I believe I couldn’t pronounce grandma at first and it came out mangie. I love the privilege of being a grandma,” Hickey said. “Putting my name behind it allows them to differentiate with other grandmas.” 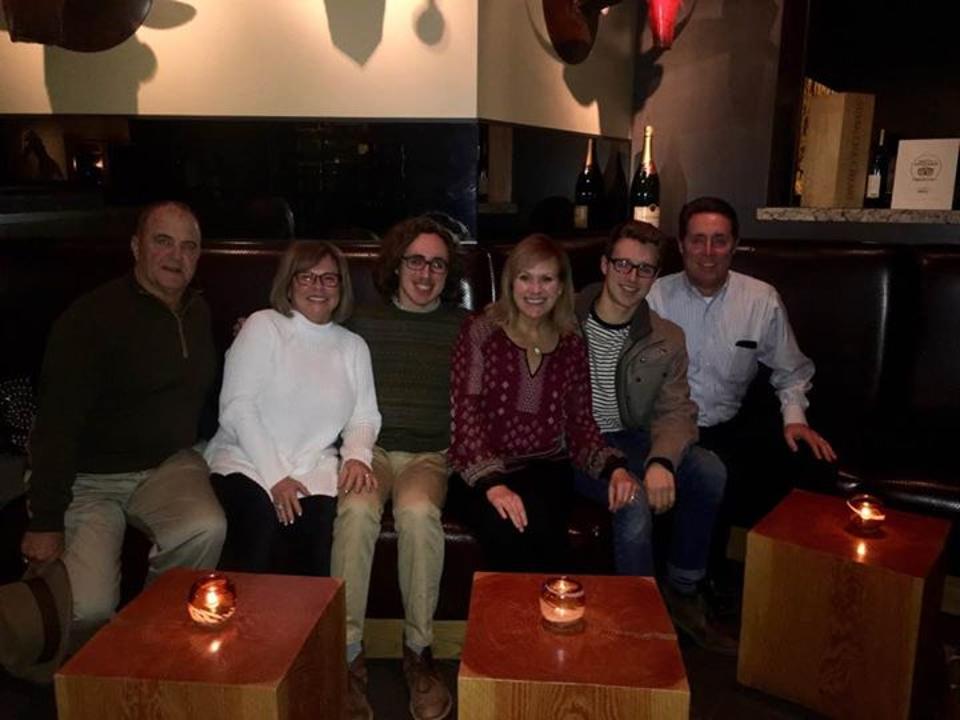 Eva Rich and her husband, CSM William “Skip” Rich are Mee Maw and Paw Paw, respectively. Eva said her grandsons called them those names “until they became too mature in their early teen years.” Then they became Grandma and Grandpa. “The titles aren’t important, the tone in their voices of respect and love were what tugged at our hearts and still do as older teenagers now,” she said. “We will remain the grandma and grandpa that is said with respect, honor, and interest in whom and what we are and a touch of ‘for grantedness’ of our love, openness and total willingness to spoil and give unconditionally like grandparents can do. There’s nothing like it.”

“Being called grandma at 42 wasn’t happening.” Killian and his Pammaw (Pam Barry Sullivan) sitting pool side

Pam Barry Sullivan was a mom and a grandma at a young age. She said her own mother was called Oma. Her grandmother was GG (for great grandma). “And I am Pammaw,” she said proudly. “My grandson had many grandparents when he was born. To identify each of us we all have our own special name, and being called grandma at 42 wasn’t happening.”

Laura Warnes is a mother of nine and grandmother of seven, so far. “My children named us when our first grandchild was coming into the world. It was our preference. It isn’t a matter of should or shouldn’t; it was a preference. We did not want to name ourselves. We wanted to leave that up to the next generation,” she said. “Our kids did something that we thought was special. We had asked the couple who were expecting what they would like their baby to call us. They decided that it wouldn’t be fair to decide that for all the grandbabies, so they asked all the kids in the family to have a pow-wow. They all started throwing names into the mix and then voted on their favorite. And then when our first born granddaughter was born, they just called us by those names so she would, and everyone was happy. We, personally, loved that method.” The Jon and Laura Warnes are PawPaw and MaeMae, respectively.

Laura said she had a friend who strongly wanted her first grandchild to name her. “She said, ‘Whatever my grandbaby calls me, that is who I will be,’ until that baby called her MooMoo. Then she named herself.”

ABOUT THE AUTHOR –  Robin Seaton Jefferson Robin Seaton Jefferson lives just outside of St. Louis with her husband of 23 years and two daughters. Find her on Twitter and Facebook @SeatonJefferson or contact her at rsjreporter@charter.net.