Living Life To The Fullest: How My Perspective On Dementia Changed In One Fun Weekend

Living life to the fullest

How my perspective on dementia changed in one fun weekend

Who likes to admit they’re wrong, especially when they think they have some semblance of knowledge about a topic?  But being challenged on preconceived notions has its benefits, when the lessons learned outweigh the angst of being way off base.  Yes, I was wrong–and my own 59-year-old perceptions were turned around by a couple of gallivanting guys.

This 180 in my perception came to pass last month when I was introduced to two gentlemen, Brian LeBlanc, a 58-year-old Floridian, and Mike Belleville, 57, from Massachusetts, who hung out with me and some friends in Denver.  It was four days of fun and frivolousness–we were eating out, eating in (Mike is as good a cook as anyone I’ve ever known!), having wine, whiskey and beer tastings, playing croquet, climbing Colorado’s red rocks, hanging at Estes Park, eating Rocky Mountain oysters, listening to jazz at the Brown Palace Hotel in Denver, etc.–simply a cool long weekend with new friends.  Oh, I forgot to tell you, these guys are both living with dementia!

. “I told bad jokes, gave him some grief about his clothes–we were just two guys joking together.” 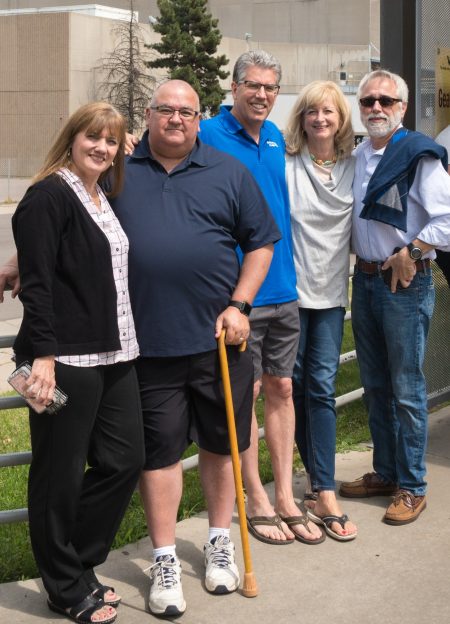 This whole journey, or should I say adventure, started a year ago when I heard Brian (and my buddy Robert Bowles) speak at the Dementia Action Alliance conference in Atlanta.  Karen Love, ED, of the DAA and a long-term friend of mine, fervently believes the true experts of dementia are those individuals and families living with symptoms and that their voices are the ones that should be heard.  I think of myself as somewhat of an out-of-the-box thinker when it comes to aging and senior living, but Brian was seemingly talking straight to me when he spoke about the demeaning way people approach him (or ignore him) when they learn he has dementia.  I was that guy, unintentionally condescending, probably exuding pity, doing everything but making him feel simply like a person dealing with a disease.  So then and there, that same night I heard him speak, I consciously went out of my way to treat him like anyone else I know.  I spoke to him that night with my usual mix of sarcasm and banter, and we hit it off instantly.  I told bad jokes, gave him some grief about his clothes–we were just two guys joking together.  And we both think we’re a lot funnier than we really are!

I’m usually not one for reflection, but that night it hit me that there are millions of people out there like me, thinking of dementia in the most negatively stereotyped way possible.  Virtually every story you read or see, often in a fund-raising context, focuses on the helpless, painful images of the disease, and the sense of hopelessness that comes with it.  That is absolutely a huge part of the reality, I do not want to diminish that at all, but it’s not the WHOLE story.  So our IN2L team and I decided to put together a video showcasing these guys still living. No pity, no looking for donations, nothing negative, just showing people living their lives to the fullest–hence a weekend of mayhem!

It was a zest-filled weekend in and around Denver, we were the Traveling Wilburys with cameraman in tow.  There were some times when the disease would come alive for our stars, but they were revived through companionship and engagement. We visited tourist spots, had a robust day at the iN2L headquarters (https://in2l.com/), which I head up, talking technology and dementia–and frankly, just had a hell of a good time.

Though the video will have a fun vibe, we do not mean to take anything away from the ravages of the disease as it progresses.  Nothing about this is intended to sugarcoat how devastating it can be for the individuals living with the disease, for their families, and for their caregivers.  The reality of dementia is brutal.  But there is a perspective to be had in between these two extremes, and if our video errs a bit on the positive side, so be it.  There is plenty of fodder out there focusing exclusively on the negative.

Who knows how the video will turn out? Our intention is to release it at the Dementia Action Alliance conference in Atlanta this summer.  Maybe thousands of people will see it, maybe just a few hundred.  But the journey for me is all worth it, whatever happens, since just getting to meet Brian, Mike, and the unsung hero, Mike’s wife Cheryl, was worth the ride itself.

I don’t want to project my revelation on someone else, but why not give it a shot?  The next time you find out someone you know has been diagnosed with dementia, just be real with them (as Brian taught me).  Ask questions, listen, don’t pity them, just treat them as you would have the day before when you didn’t know they had the disease.  It’s never too late to challenge your own stereotypes and perceptions!