PRAGUE in the Czech Republic: Our Dream Destination

For the past couple of years our family vacations have included our kids and grandkids—and they were all wonderful adventures, fun times and brought lasting memories. But this summer my husband and I decided to take a trip solo, and we picked Prague in the Czech Republic as our dream destination.

With dozens of hotels to choose from, we selected the five-star luxury Prague Four Seasons Hotel. Located in the city’s historic Old Town, the hotel’s impeccable service, elegance and charm, attention to detail and extremely accommodating staff, made it for us, the perfect place to stay.  (They even have a spa and relaxation pool—but our priority was walking and exploring.)

The dining options seemed endless. We received a long list of restaurant recommendations from friends who had traveled to Prague—some of the places were pricy, some moderate, some menus offered basic foods, some inventive cuisine. Our favorite was Kampa Park, rated one of Prague’s best restaurants.  It’s situated on the banks of the Vltava river with a great view of Charles Bridge and offers sumptuous gourmet cuisine at reasonable prices. We also had a few meals at CottoCrudo at our hotel, which was not only very convenient, but offers innovative Italian classics including fresh seafood and homemade pasta.   Field, another popular choice, features farm to table dining.

Prague is one of the most picturesque, beautiful, historic European cities we have ever visited.

Of course, a grandparent’s European trip must include presents for their grandkids. Prague is known for elaborately hand-crafted marionettes and it was a given that’s what we would bring home. While almost every souvenir store in town sells varying versions, we visited the shop recommended by the hotel concierge— Marionety Truhlar. There was a huge selection of colorful carved wooden original puppets on strings—we picked a pirate and a cowboy for our grandsons.  We also searched the city for a Czech toy store and found Sparky’s. While they had a large inventory of American toys, they also sold an array of toys made in the Czech Republic.

When it came to what sights to see, our four days were filled with trying to cram in as many spectacular attractions as possible.   Here are four top sights that   shouldn’t be missed: 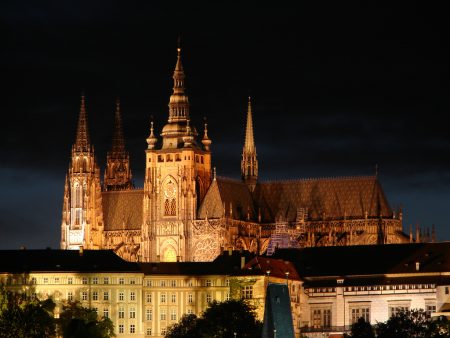 Prague Castle consists of a large-scale complex of palaces and ecclesiastical buildings of various architectural styles, from the remains of Romanesque-style buildings from the 10th century through Gothic modifications of the 14th century. It also serves as the office of the country’s president. 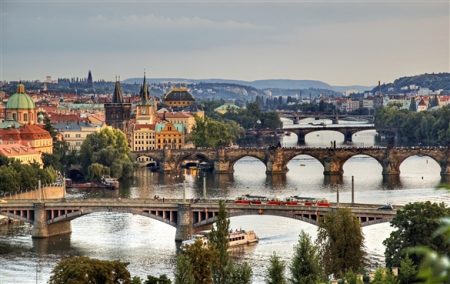 Charles Bridge, a pedestrian zone, is a stone Gothic bridge that connects the Old Town and Lesser Town (Malá Strana). Its construction began in 1357.  There is a tower standing on each end of the bridge and a gallery of statues along the sides.   Czech artists, musicians and souvenir vendors line both sides of the bridge year-round performing and selling their wares. The bridge has witnessed battles, executions and in recent years, has been the background for many American films. 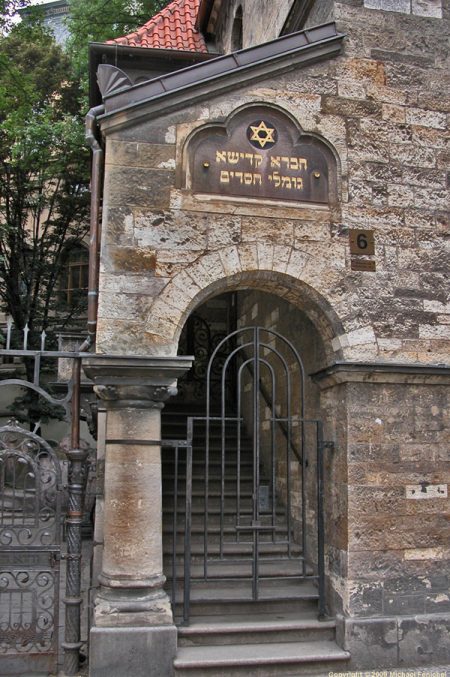 Jewish Quarter, known as Josefov, houses the Old Jewish Cemetery with headstones dating back to 1439, the Old-New Synagogue (dating to 1270), the Spanish Synagogue and others, incorporated through the Jewish Museum. The Pinkas Synagogue features the names of every local Jew — 80,000 — rounded up in the Holocaust. 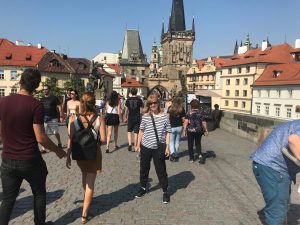 Old Town Square was founded in the 12th century and has been witness to many historical events. The lively square is lined with magnificent buildings in different architectural styles, from Gothic to Baroque. 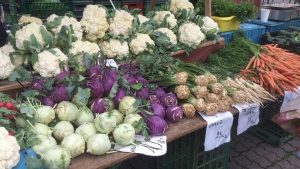 Farmer’s Market, at Jiřího z Poděbrad square, sells fresh cheeses, pastries, bread, organic produces and fresh juices. It’s open Wednesday through Saturday in front of the Church of the Most Sacred Heart of Our Lord. the

Probably the most fun we had was wandering around the maze of windy cobblestone streets. (Wearing comfortable shoes is essential.)  Other than the notable tourists’ attractions, we browsed art galleries along the way, looked inside Czech Crystal stores, grabbed quick snacks and drinks at some of their outdoor cafes and stopped for a mug of beer at one of their countless pubs (they are known for their beer.)

By the end of our stay we were grateful for the experience. Prague is one of the most picturesque, beautiful, historic European cities we have ever visited.   While it’s a perfect getaway for a couple, or friends, it would also be a great city to vacation with youngsters. So maybe one day we will return to Prague with our children and grandchildren by our side.

ABOUT THE AUTHOR – ALICE BURDICK

Alice Burdick Schweiger is a New York City-based travel, entertainment and medical writer who has written for numerous national magazines including Good Housekeeping, Family Circle and Woman’s Day. She is a co-author, with Laura and Jennifer Berman, of Secrets of the Sexually Satisfied Woman