When Nana Moved In – ‘My grandmother came to live…’

When Nana Moved In

My parents became first time homeowners in the Summer of 1958.  Moving their family of five from Brooklyn to Westchester was a huge step for them.  My dad was a small business owner and my mom worked full time at the telephone company in White Plains.  My siblings were 13 and 10, but I was just 4, which necessitated some real help for working hours.

Nana, (my maternal grandmother) came to live with us at that time and although she was already 70, her ability to care for us was never in question.  Nana was sharp, funny and tough.  Mother of 10 boys and 2 girls herself, she knew how to temper the teenage adolescence of my brother, the incredible exuberance of a four-year-old and the timidity of a shy 10 year old. My parents were able to move through their day knowing, that their children were happy and safe.

Call out:  “She expected nothing less but respect from all of us, for her, for any elder for our interaction with each other as friends. “

She was not able to help with homework, but she was a disciplinarian who made sure homework was done.  Nana was also a talented storyteller and had a beautiful tenor voice.  She laughed easily and listened wholeheartedly.  Affectionate and kind, she created an atmosphere of acceptance to any friends we brought home and eventually became the Nana to the neighborhood. She expected nothing less but respect from all of us, for her, for any elder for our interaction with each other as friends.  She returned that respect in kind and was very approachable on almost any subject.

As I was the youngest, I was able to spend the most time with her.  She made everything a learning lesson.  She loved the movies and consequently so did I.  We would go on the bus, so it taught me directions. She used playing-cards to teach me my numbers and how to write them and count.  She used the same cards to later teach me deductive reasoning, which of course I didn’t realize at the time.

What I admired most about her, (especially looking back with adult eyes), was that while she was our caregiver, our soother, our everything all day long, she gently relinquished her role to my parents the moment they stepped in the door.  It was clear that she was the Nana and they, were the parents, the decision makers of our current and future selves. Her graceful acceptance of where her role ceased and theirs began was quite remarkable; it was seamless.  As children, we never played one adult against the other, we knew it would not be tolerated.  She left an indelible mark on our family life.  My mom and dad often remarked that they could not have done it without her.

Do I think that I could be a live-in grandparent?  Possibly, but I hope I could do it with the strength and dignity she afforded us all.

To read more from Nan Kirkpatrick

ABOUT THE AUTHOR – NAN KIRKPATRICK 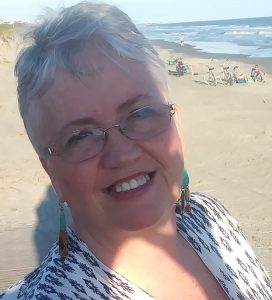 Nan Kirkpatrick has been married 43 years. She lives in New Rochelle, works in Manhattan and is the mother of three, Nana to six grands between ages 3-11. She loves to write, refinish furniture and laughing with her family.