Ruth Bader Ginsburg is a struggling attorney and new mother who faces adversity and numerous obstacles in her fight for equal rights. When Ruth takes on a groundbreaking tax case with her husband, attorney Martin Ginsburg, she knows it could change the direction of her career and the way the courts view gender discrimination. KIDS FIRST! Film Critic Ella L. comments, “The characters are well crafted and the aesthetic of the 50s to 70s time period really sets the tone of the movie. It feels real and true, as opposed to the glorified version of the story that some biographical films show. The authenticity and uniqueness of the film really helps it stand out.” See her full review below.

On the Basis of Sex

On the Basis of Sex is such a fun and empowering film. I enjoyed it quite a bit as it was equally  entertaining and informative. The characters are well crafted and the aesthetic of the 50s to 70s time period really sets the tone of the movie. It feels real and true, as opposed to the glorified version of the story that some biographical films show. The authenticity and uniqueness of the film really helps it stand out. This is a very important movie for people see. <p>

This film follows the true story of Ruth Bader Ginsburg (Felicity Jones), a young and gifted lawyer, who struggles to find work simply because she is a woman. In order to prove that the law discriminates on the basis of sex, Ms. Ginsburg has to work harder than she ever has before. 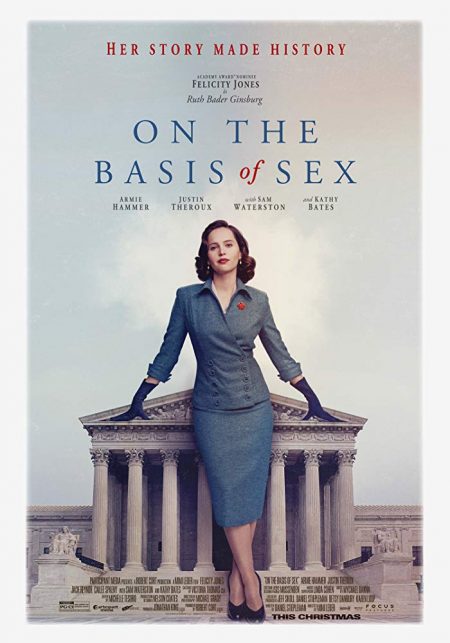 The film is very well written with an immaculate attention to detail, thanks to the writer being Ruth Bader Ginsburg’s nephew Daniel Stiepleman, whom I had the pleasure of interviewing. It is full of heart and truth because Justice Ginsburg made sure everything was accurately portrayed. She read all of the drafts of the scripts to make sure that her story told well. It is never boring! I laughed out loud when it was funny and got angry seeing RBG rejected and having doors slammed in her face, due to her gender.

The acting is really great. Both Armie Hammer, who portrays Martin Ginsburg and Cailee Spaeny who portray Jane Ginsburg absolutely blew me away. Armie portrays Martin as a man who really loves and respects his wife in such a heartwarming way. Cailee portrays Jane as a funny and empowered feminist. The relationship between Jane and Ruth is displayed with such honesty and realism. My only complaint about the acting might be that Ruth’s accent could have

I rate this movie 4.5 out of 5 stars and recommend it for ages 9 to 18, as well as adults. This film tells such a special and unique story, one that is incredibly important, with equal amounts of heart, humor, turmoil and honesty. This triumphant story really gets you thinking. It opens nationwide in theaters January hits theatres worldwide on January 11, 2019, so do yourself a favor and go watch it.