The Dream of the Rev. Dr. Martin Luther King, Jr.

It was late August, 1963. I was 12. I remember my father calling me into his room. The radio was on, and I heard cheering.  It was not a baseball game kind of cheer…it seemed louder and longer. It was a sustained roar.

My dad, aged 72 and blind, pointed in the direction of the radio with one hand, and put his other index finger to his lips…he was signaling me to be quiet…and to listen.

Next I heard the voice.  A combination of speech and chanting. The cadence was like none I ever heard. The word music rose and fell, the power was like a wave…swelling and then resting, soon to rise again.

That speech on that sweltering August day ignited a charge of energy that would not be stopped…not by gushing fire hoses, snarling dogs, enraged threats, church bombs or snipers’ bullets.  At the tender age of 35, that eloquent preacher from Atlanta set in motion a flood of individual and collective actions which would change how people viewed not only our neighbors, but ourselves.

ideals of Dr. King’s mission were rooted in his Christian faith; his principles and civil disobedience techniques were borrowed from Gandhi.  But no matter our faith, race, ethnicity, gender or age, the heroic vision and oratorical brilliance of Dr. King is a beacon for us all. 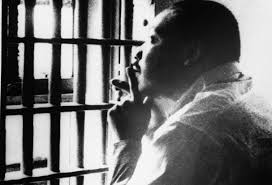 I also recommend reading Dr. King’s Letter from a Birmingham Jail, written in April, 1963 to his fellow pastors in which he reminds them that everything Adolph Hitler did in Nazi Germany was “legal” and all actions by German citizens to aid or comfort their Jewish neighbors were “illegal.”   Practicing peaceful disobedience to unjust laws takes courage and the willingness to withstand criticism…and rarely comes without cost.

This poignant document of American historical significance calls to question the differences between right and wrong, justice and oppression.  It is available at this link Letter from Birmingham Jail

In addition, here is a link to the Martin Luther King Day of Service opportunities, organized by the Corporation for National and Community Service.

During my 35-plus year professional life I’ve learned that progress is not achieved by intention alone. Strategic advocacy is the only way wrongs can be righted and ideas can be transformed into action. All of our voices and votes are needed, and support of advocacy organizations is vital to assure your perspectives are represented.  As examples to our children and grandchildren, let’s commit to be ardent and effective advocates.