How Not Meddling Can Open Doors

How Not Meddling Can Open Doors

You’ve been a parent and now you’re a grandparent. How hard could this new role be?

In a survey of almost 5,000 grandparents, three-quarters reported that being a grandparent was the single most important and satisfying aspect of their lives.  Although the role usually brings pleasure as we describe in Being Grandma and Grandpa, many new grandparents need to fine tune attitudes and behavior to be successful. The most difficult part can be the realization that grandparents are not in control of family situations. Many of the 224 grandparents that we talked to told us that the worst part of grandparenthood is not having the final say as to how their grandchildren are raised.

New parents want supportive relationships with their own parents, including helpful information and concrete examples of assistance, but they do not want critical and unsolicited advice. Parents are the generation-in-between and can foster or obstruct grandparent/grandchild relationships. Grandparents quickly learn that they need to respect boundaries and negotiate with their own children. One grandmother was explicit when she said, “Kids these days have a lot of power over us and it would be dreadful to be shut out.”

New parents want supportive relationships with their own parents, including helpful information and concrete examples of assistance, but they do not want critical and unsolicited advice. Grandparents are expected to be involved with and invested in grandchildren but to not interfere. Some grandparents choose to have discussions rather than giving advice. They’ve learned that unsolicited advice can be interpreted as judging, interfering with, or rejecting of parental values. Almost all told us some version of the same advice for grandparents: “Never criticize,” “Don’t meddle;” “Don’t show disapproval;” and most commonly, “Zip your lip.”

We found that the grandparents who reported good rapport with their adult children were more likely to be closely involved with grandchildren. However, even if the grandparent is not particularly close with the child and/or child-in-law, showing them respect is helpful in building good relationships.

When there are conflicts or problems between the generations, resolving them quickly is imperative. Our advice to grandparents is to be willing to apologize for past behaviors and to let go of past grievances. After all, these are your grandchildren’s parents, so be kind to them.

Emily Stier Adler, Ph.D. is Professor of Sociology Emerita at Rhode Island College.  She has published work on marriage, adolescence, political life, retirement, and grandparenthood. She has four active grandsons.

Michele Hoffnung, Ph.D. is Professor of Psychology Emerita at Quinnipiac University. Her research and writing have focused on lifespan development, women’s roles, motherhood, and grandparenthood.  She has six grandchildren.

Their most recent work is Being Grandma and Grandpa: Grandparents Share Insights, Advice and Experiences. 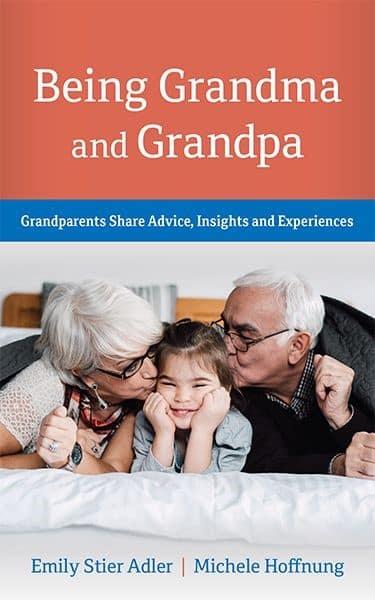