As grandparents we want the very best for our grandchildren.  Knowing that they will face many challenges, we try to guide them with our hard-earned wisdom and offer them our hopes for the future.

Whoa!  What’s all that about?  Though young, Greta has already distinguished herself as a leader and spokesperson for her generation.  So much so that she was invited to speak at the World Economic Forum in Davos, Switzerland, a gathering of 2500[1] business leaders, international political leaders, economists and academics, to discuss the most pressing issues facing the world.  And she is speaking about climate change.

“Solving the climate crisis is the greatest and most complex challenge that Homo sapiens have ever faced,” says Greta, and her belief is supported by a majority of scientists around the world.

Whether you are a believer or not I urge you to listen to Greta’s words.  Listen more than once.

She gets ‘it’.  Her generation gets ‘it’.  Many millions around the world get ‘it’.  We all need to get ‘it’?   We need to be as fearful as she is and we need to act.  You could say it is our duty as grandparents.

Greta’s closing words at Davos, “I want you to act as if our house is on fire. Because it is.”

ABOUT THE AUTHOR – ROB ST. GERMAIN 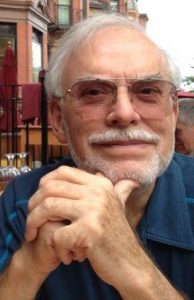 Papa Rob is a grandfather and retired management consultant living in Ashland, Massachusetts.  His world view is a gift from the many people of various cultures around the world with whom he has worked.

For more on climate change

If grandparents cared about climate change