When Nancy Pelosi was sworn in as Speaker of the House, she became the third most powerful US politician. Both loved and loathed, her comeback story is an extraordinary tale of political survival.

Nancy Pelosi, the elegant woman in white, was seated directly above President Trump’s left shoulder at the 2019 State of the Union Address. As he turned for applause, she made eye contact, shot him a purse-lipped smile, and gave a little straight-armed clap. Pelosi’s children recognized the look. Her daughter Christine tweeted: “oh yes that clap took me back to the teen years. She knows. And she knows that you know. And frankly she’s disappointed that you thought this would work. But here’s a clap.”

At 78, Nancy Pelosi is again Madam Speaker, the most powerful woman in U.S. government. After seven years in limbo as the minority leader of the House, she was elected Speaker for the second time after the Democratic win in Congress at the midterm. She won over the objections of fractious new members, some of whom had campaigned on a promise to vote against her. They called her too liberal, too conservative, or just too old.  But Pelosi’s deal-making skills and her ability to build consensus helped her win by a substantial margin—even getting the vote of freshman firebrand Alexandra Ocasio-Cortez.

Wearing a tailored suit, high heels, and pearls, the woman wielding the gavel is not only a savvy politician but a devoted mother and grandmother.  She famously gave birth to five children in six years, and now has nine grandchildren.  All her grandkids attended her swearing-in in January (a photographer caught her lovingly brushing one granddaughter’s hair before the event).

Once a punch line signaling irrelevancy, her grandma status has become more of an applause line. After a meeting with President Trump to negotiate the border wall – which he spontaneously allowed TV cameras to broadcast.  After President Trump stormed out of a meeting with her and Senate minority leader Chuck Schumer to negotiate the border wall, Pelosi told reporters, “I’m the mother of five, grandmother of nine. I know a temper tantrum when I see one.”

Raising five kids so close in age was no joke. But Pelosi honed her organizational style in her overflowing home. She had to, for survival! By school age, her kids were packing their own lunches and snacks. They were expected to pitch in at an early age–even the preschoolers folded their own laundry.

The experience of motherhood nurtured an understanding of people that has served Pelosi well in politics. Raising five children meant attending to their individual differences and needs.  Daughter Christine, quoted in the Washington Post, said, “She’s used to people wanting to be different and wanting to strive.  She’s used to competition among people.” She added, “The shifting dynamics between siblings meant that you had to have a sense of harmony and you had to let every day be a new day…a clean slate.” Read more from the Washington Post article here.

The woman who singlehandedly saved Obamacare by building a coalition in Congress was used to building consensus at home.

As a mom, Pelosi contained the chaos with a discipline style that was calm but effective, letting the kids know when she was disappointed, that she expected better of them. When the siblings disagreed, she would listen, explain her position, and let them decide. The consensus usually went with Mom.

And, if all else failed, there was that look.

Looking back on her own family history, it seemed that Nancy Pelosi was groomed for politics. She was born in Baltimore, the only daughter (out of seven children) of Thomas “Big Tommy” D’Alesandro, Jr., a Democratic congressman who became mayor of Baltimore.

In 1963 she married her college boyfriend Paul Pelosi, now a businessman. As they raised their family in San Francisco, she became active in Democratic Party politics and fund-raising. In 1987, when her oldest child was finishing high school, Pelosi ran for the Senate and won. She has served 17 terms since then.

Pelosi has had to develop a thick skin, and she shrugs off personal attacks. “Don’t take it personally,” she says. And don’t hold grudges.

Much of what inspired Pelosi to get into government – and to stay there –has to do with being a mother and grandmother. “I always saw politics as an expansion of my role as a mom,” she said in an interview with Nancy Schnall for the Huffington Post.

The chamber over which Pelosi presides has a new look circa 2019, the Year of Women. A record 36 new female representatives won seats, joining 66 female incumbents in the House for a total of 102 women. In the Senate, 14 newly elected women were added to the 10 already serving.  That’s 126 women out of 535 members of Congress, the most ever.

If you’re counting, that’s still a little less than 25 percent, far from the parity many have been waiting to achieve. Nevertheless, it’s progress. As Speaker Pelosi said, after being sworn in for the first time in 2007:

“Never losing faith, we waited through the many years of struggle to achieve our rights. But women weren’t just waiting; women were working. Never losing faith, we worked to redeem the promise of America, that all men and women are created equal. For our daughters and our granddaughters, today we have broken the marble ceiling. For our daughters and our granddaughters now the sky is the limit.” 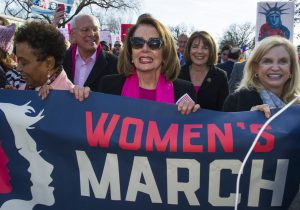 Pelosi likes to encourage women to enter politics regardless of their party affiliation. “If I have one piece of advice for women who want to get involved and make a difference, it is this: just run. Run for student government; run for local office, run for higher office. Anything is possible in our country.” Having a woman as Speaker (once again) sends a message to young girls and women across the country that anything is possible.

“My parents taught me that public service is a noble calling, and that I had a responsibility to help those in need.” Another thing her family instilled in her was the value of a good education. Pelosi firmly believes access to a college education is very important for all young people.

“I was never on the (front) of Time Magazine even though I was the first (woman speaker of the House.) Isn’t that a curiosity? The Republicans win and Boehner’s on the front of Time magazine; Mitch McConnel wins, he’s on the front of Time magazine. Isn’t there a pattern here? Now, as I said, who I am does not depend on any of that, with all due respect to all of you. But as a woman, it’s like, is there a message here? Is there something that we’re missing?” 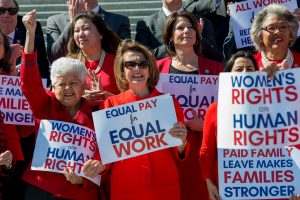 Nancy Pelosi, center, leads women members of Congress in the Day Without A Woman protest outside the Capitol Building March 8, 2017 in Washington, DC 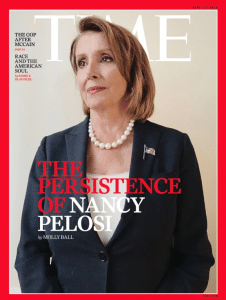 Pelosi on the cover of Time – September 2018. Neither Time nor Newsweek used Pelosi’s image for a cover during her four-year stint as the first woman speaker of the House from 2007-2011. However, former House Speaker, John Boehner (R-Ohio) appeared on both magazines’ covers soon after becoming the presumptive speaker in 2010 before he even picked up the gavel. 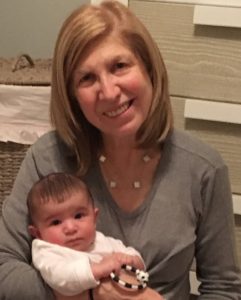 Wendy Schuman is a proud grandmom and freelance writer who makes her home in West Orange, NJ. She is a former editor of Parents Magazine and Beliefnet.com. Wendy and her husband helps new generation of college grads in  Millennials in Wonderland. To learn more about Grad Life Choices, their pro bono coaching program, click here.

To read more from Wendy in GRAND 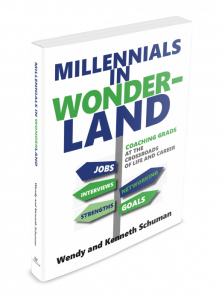