The Double-Edged Nature of Being a…

The double-edged nature of being a grandma

“Tell me a story about your grandma,” my 11-year old granddaughter asked during a recent visit.

“Well, you know you’re named after her,” I said reminding her that my grandma Amelia is her namesake. “She was my best friend when I was growing up. I loved spending the night at her apartment because no matter what we did, I enjoyed her company.”

My grandma Amelia was a playful, storyteller who was devoted to my parents and my two brothers and me. She loved to play cards with her circle of friends and traveled around the world three times with my grandpa. But she was a homebody at heart. A second-generation San Franciscan, she was 12-years old in the 1906 earthquake and shared many stories of camping out in Golden Gate Park during the aftermath.

I can picture her corner apartment in the San Francisco Richmond district as vividly as if I were standing in it right now. When my grandpa was alive (he died of a heart attack when I was in high school,) I slept on their davenport in the living room right beside the radiator which hissed in the morning when it first came on. After he died, I slept in his twin bed beside my grandma.

“When I’m a grandma,” she said, “I’m going to tell my grandchildren about you, Baba.”

I could hardly wait until Saturday to go on one of our outings. My grandma and I took the 38 Geary bus downtown dressed in suits and white gloves. We admired the window displays in the City of Paris, I. Magnin and Macy’s in Union Square then walked down to Woolworth’s Five and Dime for lunch at the counter. We ordered “all-around strawberry sodas” — soda water, strawberry syrup and strawberry ice cream and happily slurped up the last drops through our straws.

Sometimes we took the cable car and walked through Chinatown then slipped inside Old St. Mary’s Church to light a votive candle on the altar.

My favorite outing was to see the Saturday matinee at the 4-Star theater on Clement Street featuring “The Little Rascals.” Before we saw the movie, my grandma gave me a dime to spend at the penny candy store across the street. The store had a long glass display case with dozens of different kinds of candy — Lik-m-aid, red licorice whips, wax lips, Tootsie rolls, button candy dots, Turkish taffy, and Kits. An old woman stood behind the counter, wheezing as she patiently filled a little brown sack with the 20 pieces of candy I selected.

Our trip to the penny candy store is my granddaughter’s favorite story. She has a sweet tooth just like my grandma and can’t believe I could get 20 pieces of candy for a dime.

“When I’m a grandma,” she said, “I’m going to tell my grandchildren about you, Baba.” I thought of my grandma and how pleased she’d be to know her namesake has a fondness for sharing family stories. Later, I told my daughter Amelia’s sweet pledge and teared up knowing I would not be around to meet her grandchildren.

That’s the “double-edged nature of being a grandma” writes Robin Marantz Henig in her poignant New York Times essay: The Agony and the Ecstasy of Grandmotherhood.

“Your thoughts turn powerfully toward the future — one that now includes the grandchildren you adore — at the very same moment you’re reminded of your own absence from that future. It’s an odd mixture of birth and death, which is what gives grandmotherhood its beauty, as well as its specific and poignant pain.”

Having recently lost my husband, I’m experiencing that paradox first hand. As I watch my granddaughters without their beloved grandpa to witness all their milestones and joyous celebrations, I’m aware of my own mortality more than ever before. Though my joy is bittersweet I cherish the precious moments that I do get to share with them even more. 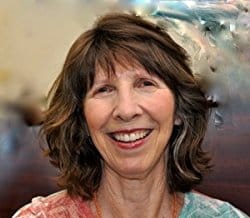 Donne Davis is the founder of the GaGaSisterhood, an award-winning blog and social network for enthusiastic grandmas. Ever since she became a grandma in 2003, she has been on a mission to connect with other grandmas and explore what it means to be a modern grandma

To read more from Donne Davis 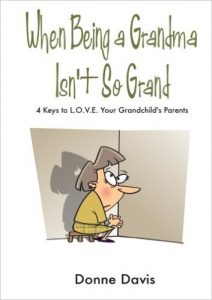