It is not easy to be a trailblazer. But these two female athletes – Billie Jean King and Kathrine Switzer – had determination and willpower to reach their goals. I hope you will enjoy these two books and share them with your grandchildren. 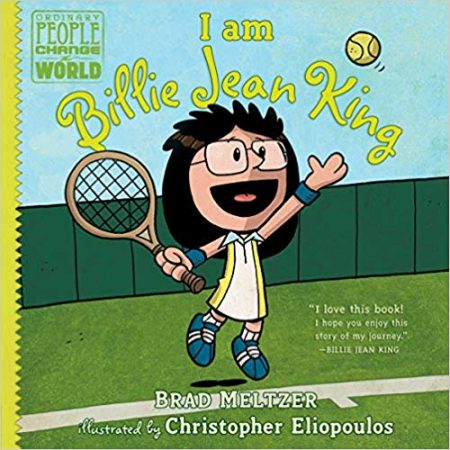 I am Billie Jean King  (Ordinary People Change the World)

Billie Jean King is one of the greatest tennis players of all time. Read about this amazing woman athlete in the seventeenth picture book in the New York Times bestselling series of biographies about heroes.

“I love this book! I hope you enjoy this story of my journey.” – Billie Jean King

This book follows Billie Jean from her tomboy childhood through her triumphant rise to the top of the tennis world. As she was growing up she quickly found out the world did not treat make and female athletes the same. The book covers her early lessons on public courts, rise through the ladies’ tennis rankings and famous match with Bobby Riggs.

You should also be aware that there is a page where Billie Jean talks about her homosexuality and finding love with another woman. It does so in an entirely appropriate way. However, every parent has to make a personal decision regarding how and when they want to broach the subject of diversity with each and every one of their own children. At the back of the book, there is an excellent timeline and photos.

Brad Meltzer is the author of the New York Times bestselling Ordinary People Change the World series for children, as well as six New York Times bestselling thrillers for adults. He is also the #1 bestselling author of the critically acclaimed comic books Identity Crisis and Justice League of America, and is the cocreator of the TV series Jack & Bobby. A graduate of the University of Michigan and Columbia Law School, he lives in Florida. To learn more, visit bradmeltzer.com.

Christopher Eliopoulos began his illustration career as a letterer for Marvel and has worked on thousands of comics, including Franklin Richards: Son of a Genius, Pet Avengers, and Cow Boy, all of which he wrote and illustrated. He is the illustrator of the New York Times–bestselling Ordinary People Change the World series of picture book biographies. He lives in New Jersey with his wife and their identical twin sons. 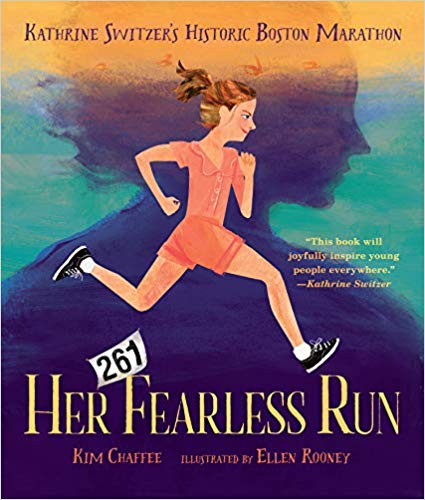 Kathrine Switzer changed the world of running. It all began as a young girl running in her yard and marking the laps in chalk on a tree. She continued to run at Lynchburg College and Syracuse University. While at Lynchburg, she interviewed some students who had run the Boston Marathon and became enthralled with idea of running a twenty-six mile race.

“She thought running was magic.”

Finally, on April 19, 1967, Kathrine’s chance came. She was officially entered in the race with number two sixty one. Read about the challenges and triumphs of that race day as Kathrine attempts to be the first woman to run the Boston Marathon with official race numbers. This true story is inspiring and courageous.

The illustrations are bright and show the running scenes and Kathrine’s expressions quite well. Her Fearless Run will get young grands excited about running and inspire them to push the limit to go for their dreams.

Kim Chaffee, a life-long New Englander and debut author, is a former second-grade teacher now focusing on writing and being a mom. She holds a BA in history and a Master’s in education. In addition to blogging about picture books for parents, teachers, and writers, she runs as well as organizes a local annual race. She lives with her family in New Hampshire. 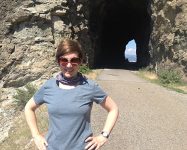 Ellen Rooney grew up watching the Boston Marathon and now spends her time as an illustrator and designer. She has her BFA from the University of Victoria. A painter, printmaker, collage artist, and debut picture book illustrator, she now resides in British Columbia, Canada, with her husband.