Antigovernment protests every Thursday night in the Austrian capital, older women wearing hand-knit hats in purples, reds and blues. They like to march between the shouting students and the masked anti-fascists, waving to onlookers and hoping to catch someone’s eye long enough to exchange a smile.

“It’s the Grannies,” shouted a voice from a third-story window as the demonstration wound its way through Vienna’s Fifth District last month. “Look! The Grannies!”

They are the Grannies Against the Right, dozens of women from a generation that watched their mothers suffer the fallout of World War II and helped create democracy in Austria.

Now, freed from the burdens of raising their families and working to support them, they are galvanizing protests against Austria’s shift to the right under the conservative-nationalist government of Chancellor Sebastian Kurz.

They are even aiming to form an international “resistance” against the right wing and extremists across Europe and beyond, the Grannies declared at an annual meeting last month. 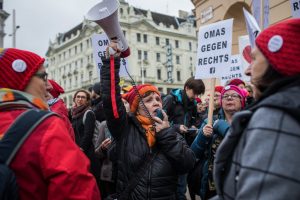 “We are angry about their policies,” said Monika Salzer, 71 and a grandmother of three. She founded the group on Facebook in November 2017 amid concern over the return of a far-right party to government. Last year, she registered the Grannies as an official organization in Austria, and it now counts 300 members, with branches across Austria and Germany and thousands of followers over social media.