GRANDmotherhood is Not For Sissies

My spouse and I adopted two little girls several years ago. One, Sophie was murdered. We are raising her son, Jalen. This story is about our interactions.

It’s the truest Mother’s Day Card I ever received. A petite, sturdy old woman clad in a flannel shirt and blue jeans, her outfit set off by a long strand of pearls, stands astride a jackhammer. She smiles at the camera while using her power tool to break up the cement floor. Inside it reads, “Motherhood is not for sissies!”

We share a version of grandmotherhood that extends well beyond the typical milk and cookies once in a while and dinner on Sunday variety of Nonna, Nana or whatever else.

My dear friend Gail, who sent it to me, crossed out the word, “Mother” and replaced it with “grandmother.” Gail knows it works both ways. Her daughter, son-in-law, two adolescent children and large old dog moved in with her two years ago and there’s no sign they are leaving anytime soon. We share a version of grandmotherhood that extends well beyond the typical milk and cookies once in a while and dinner on Sunday variety of Nonna, Nana or whatever else we might be called.

My grandson, Jalen, lives with us. He just turned eleven and we are a lesbian couple, ages 81 and 73 and this is not how we envisioned our old age. You know the old saying about “Beware what you wish for.”

When we adopted two sisters, ages three and six, Irene and I were already well into middle age, but we thought we could put the 20 years it would take into raising the girls. The Fates had other ideas and after Sophie died at age 27 there was an almost two-year-old who needed mothering. I know they say motherhood lasts a lifetime but I had never taken this aphorism literally.

Yesterday, Mother’s Day, our daughter Melinda, prepared a beautiful high tea for us. There were Stilton cheese and pear plus cucumber, dill and cream cheese finger sandwiches, petit fours, fruit salad and three varieties of special teas. I felt for a couple hours as if I had put aside my jackhammer and entered into the age appropriate celebration of the day.

But the sandwiches were barely on their way to digestion when I snapped back to my main weekend task. It was the same story every parent hears, usually when they are in their thirties. This time the script, voiced on Friday evening was, “Grandma, I’ve got to do an outline, bibliography and poster by Monday when I have to give an oral presentation.” Frankly, I don’t have the energy to argue too much about personal responsibility and why the hell have you been telling me you didn’t have any homework for the last two goddamn weeks. “It’s not that I didn’t mention all this, it’s just, as I said, I didn’t dwell on it.  Mostly I was grateful the topic was “wolves,” something I know about, since the wolf is my totem guide and thank heaven I bought that two volume National Geographic Encyclopedia of Mammals back in the early 1980’s when my girls were starting to do school reports. Between my own library, the internet and a trip to Kinko’s for color photocopies,  enlargement, most of it was done by suppertime on Sunday.

Dinner signaled a return to conventional and age appropriate Mother’s Day. Our daughter, Melinda, used the beautiful ivory colored tablecloth with exquisite cutwork and ultra-fine stitching done by my grandmother, Serafina, who died before I was born but gave me my name as well as this tablecloth.

I guess I also inherited from her penchant for taking care of other people’s children.

During our dinner, shared by our family and some friends and neighbors, we told “mother” stories. I told about my Nonna Serafina who raised an abandoned little girl in her village in the old country and how after several years when this child, Adriana, was left money by some distant relative, her long-gone parents returned to claim the girl, whom my  grandmother never saw again.  Devastated, she made her sons promise that whoever had the first daughter would give her the lost child’s name. She also left for me a Hand of Fatima necklace to guard against the Evil Eye which is what I guess they called Bad Karma in those days.  I guess I also inherited from her a penchant for taking care of other people’s children.

About my own mother I didn’t say much because although she has been dead ten years my wounds haven’t healed. It was enough to have her oven roasted potatoes with rosemary on the menu and to tell the story of how she bailed me out of an F in freshman sewing class and salvaged my place on the honor roll by staying up all night to complete my bright red print full body apron replete with bright yellow rickrack. A neighbor had a similar story about her mother finishing a hideous blue wrap around dress to salvage her academic career. Thank god our daughters didn’t take sewing. 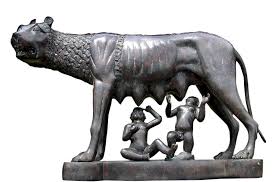 After dinner, fittingly, I returned to the task of trying to save Jalen from an F on his wolf report.  Although I thought I had retired from teaching history in 2001, here I was pointing out the Little Red Riding Hood picture on his poster and explaining how most wolves were exterminated in western Europe and the US because of unfounded myths. I told him about Romulus and Remus and also, pointing to the large carved wooden statute in our living room, the story of St. Francis and the wolf of Gubbio and how it is no coincidence that there is a large healthy wolf population in Italy.

Together, Jalen and I went over the map showing the path recently taken by Journey, the first known wolf to return to California since the last one was exterminated in 1924. Then we cut out “Defender of Wolf” stickers he could pass out to his classmates. Irene, also a retired teacher, reminded him that every good presentation starts with an interesting question.

Finally, everything was done and it was time for him as well as me to go to sleep. As I kissed him goodnight, he said, “Grandma, they are going to teach us about puberty this week and I’m kind of scared.”

“Oh, shit,” I thought. What I said hopefully calmly, was, “Oh, it’s probably just about body hair in new places, boobs for girls and changing voices for boys, stuff you already know, but just ask me any questions you want to talk about.”

A few months ago, Pope Francis said, Europe is a grandmother, no longer fertile and vibrant.” This from a man who said his grandmother was the biggest influence in his life. I think I might cut out the picture of the old lady astride her power tool and send it to him with an admonition to watch out what he says about grandmas.

By the way, Jalen got an A plus on his report. I’m waiting to hear about puberty.

ABOUT THE AUTHOR – ADRIENNE SCIUTTO

Adrienne Sciutto, a 76-year-old former San Francisco high school teacher of history and government, now gardens at home and at her farm in northern California. She loves politics, reading, gardening and wildflowers.

She and her spouse, Irene, adopted two little sisters in 1982. Their daughter, Sophia, was murdered, and they are raising her son, Jalen.