Here’s Why Grandparents Are The Future Of The Internet

Here’s Why Grandparents are the Future of the Internet

It has become a major internet cliché to say seniors are useless with technology. In fact, grandparents are starting to dominate the internet, with people aged 65+ going online more than any other demographic in the United States. Many grandparents are understanding the value of the internet, including the use of social media.

Seniors are mobilizing around the internet as services continue to be digitized and be available online. Grandparents are increasingly going online to find information, to pay for services, and even to engage in hobbies such as consuming media, using betting services like the Pennsylvania online casino, following sports, shopping, and connecting with family and friends.

Changing times have meant loved ones are often separated by vast distances, so social media has become a vital tool for grandparents to stay in touch and to connect with friends. Research has shown the internet has become a vital gateway for reducing loneliness and depression in older people.

It is easy to assume that social media is a reserve only for younger generations, but the truth is seniors have embraced networks such as Facebook and Instagram enthusiastically. By leveraging these services, grandparents are keeping in contact with younger family members more than they ever were.

If your grandchild is not a fan of picking up the phone to call, they are much more likely to engage in a conversation on Skype or holding a video call on WhatsApp. Not only are older people adopting these modern social constructs, they are also becoming proficient in using them, creating a healthy emotional outlet that is easy to partake in. 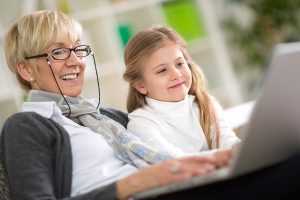 Facebook has become a particularly important service for older generations. Younger users have largely moved on to networks such as Instagram, but older adults have adopted Facebook and are now the network’s most frequent users. Similarly, Twitter has a catch-all audience, including grandparents who use the service to lock into specific news stories.

What’s interesting about social media use amongst older generations is that they use it in a much more organic and relationship-building way. Grandparents typically seek like-minded groups and individuals, often creating online networks of digital friends and contacts.

Another major benefit of the internet is it provides nearly unlimited access to the world’s information. If there is something a user wants to know, they can find it online. While all generations have embraced the informative power of the internet for various reasons, seniors are using the online world in an almost encyclopedic fashion.

For grandparents who are in their homes most of the time, the internet has become a helpful tool for finding information, such as health advice and local transport schedules.

Such is the mobility of senior adoption of the internet, a mini economy of education is being created around it. Computer classes are increasingly common in community senior centers. These courses focus on the basics of computer use, such as emails and document editing, and how to properly and safely use the internet.

That last point is important. While seniors are embracing an online life, they are also the most vulnerable demographic. Studies have shown elderly people are significantly more likely to consume and share fake news content, while seniors are also most at risk from scams such as ransomware and phishing campaigns.

Despite these risks, older generations are growing their capacity to operate online. No longer is the internet an alien world dominated by the young. It has become a place for all generations, and grandparents have become the chief demographic online by embracing social media and using the internet for their information needs.

ABOUT THE AUTHOR – MARIA TAYLOR Maria Taylor is content marketing expert & has contributed on several blogs online. She loves to write for blogs & feel free to connect with here on Twitter & Linkedin.