We can thank The Queen Mother for Sting. It was a young boy named Gordon Matthew Thomas Sumner, of Wallsend, a working-class shipbuilding town in northern England, who locked eyes with the royal as she glided through his neighborhood in a motorcade that was en route to a ship launching. the rock superstar said, “The Queen Mum waved and looked at me, and I looked back at her and that was it. There and then I thought, I’m going to be rich, famous, successful and drive a Rolls Royce like her.”

Sting has done all that and more, but despite spending lavishly (with multiple homes and a staff of 100), he maintains perspective on his wealth and respect for his roots. One need not worry that his children (or grandchildren) will be spoiled by his wealth, reportedly near one-quarter $Billion. “They have to work. All my kids know that, and they rarely ask me for anything, which I really respect…they have the work ethic that makes them want to succeed on their own merit.”

It was music, not shipbuilding that called to Gordon, so he tore himself from an environment he described as ‘toxic’ to pursue his dreams of stardom, without the encouragement of family. He worked odd jobs and attended college to become a teacher, while nights and weekends were for music. His skills were honed playing jazz in the local clubs with a variety of bands and it was one of these bandleaders who thought his black and yellow sweater made him look like a bee. So ‘Sting’ was born (do not call him Gordon).

‘My favorite rock singer is probably Roger Daltrey from The Who.”

Sting told NPR that his first job was selling newspapers on the streets, “So I developed healthy lungs. My favorite rock singer is probably Roger Daltrey from The Who.”

In 1977 Sting moved to London to form a new band.  Over the next decade, as singer/songwriter and bass player, Sting would propel the Police into the record books and the Rock and Roll Hall of Fame with songs like their first hit Roxanne.  Their biggest, Every Breath You Take, appeared on their Grammy-nominated final album, Synchronicity.

The Police won a number of music awards, including six Grammy Awards, two Brit Awards—winning Best British Group once, an MTV Video Music Award, and in 2003 were inducted into the Rock and Roll Hall of Fame.[7] Four of their five studio albums appeared on Rolling Stone‘s list of the 500 Greatest Albums of All Time. The Police were included among both Rolling Stone‘s and VH1‘s lists of the 100 Greatest Artists of All Time.

The band never ‘broke up’ but Sting left to pursue solo work while they were at their peak. His star just kept rising as he explored musical styles and shared the stage and studio with a stunning cross-section of talents; from Elton John, Yo Yo Ma, and Bruce Springsteen to Vanessa Williams, Puff Daddy and Toby Keith. His work has been consistently loved around the world and has won him every imaginable award the music industry can give, plus an Emmy and a Golden Globe.

Sting told NPR , “… for me, the key to any music career is surprise and novelty. You know, you never want the audience to be totally comfortable with what you’re going to do next. I think they need to be surprised. It’s, like, every time you come back, well, what’s he going to do now?” 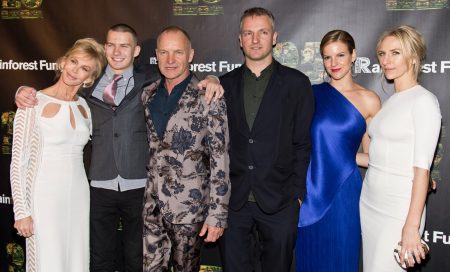 Trudie and Sting with four of their children

In 1992, he entered one of the more enduring marriages of rock and roll with actress and film producer, Trudie Styler. They have four children together while Sting has two from a previous marriage to Frances Tomelty.  As of May 2019, they had seven grandchildren.  As he revealed in FemaleFirst, as a granddad, he is “…probably better than I was as a dad. Stupidly, it wasn’t something I anticipated – you’d think with six kids, I would…I’ve really enjoyed watching our children being parents and, if I’m asked for advice, I will give it.”

Speaking to HELLO! magazine, he said: “I don’t think I have spoilt my kids. If there is one compliment that pleases me the most it is how great my kids are, or how polite, smart and connected with the world they are… and that fills me with pride more than anything else.

Most of Sting’s kids have followed him in his creative footsteps, with Joe being the singer and bassist in Fiction Plane, Coco is also a singer, Kate and Mickey are both actresses, while Jake is a film and documentary maker.

Though he admits to being an anxious “stage mother”, Sting won’t take any credit for his children’s talents.

Asked what it’s like to watch them perform, the Police star said: “It’s kind of like an out-of-body experience. You know, I have the usual stage mother anxiety, but that’s quickly dispelled by admiration and puzzlement about where they got some things from.

“I recognize myself in them but then they always do something that really surprises me, and I can claim nothing on that particular innovation or thing that they are

The favorite of their several homes is the 400-year-old Tuscan estate Sting and Trudie patiently brought back to life from a state of disrepair, Il Palagio. The family often lives and works there…four albums were recorded there, and yes, you can stay there too, when they’re not using it. Your visit (three-day minimum) will cost you so bring friends and family to fill the 16 bedrooms!

According to ItaliaLiving, currently, the famous singer and his wife produce six wines from his Chianti estate. Some of them take their name from his songs, such as Message in a Bottle or his flagship Super Tuscan blend, which is called Sister Moon. His red blend named Roxanne is comprised of 80% Sangiovese, 10% Merlot and 10% Syrah. It is actually currently called Message in a Bottle for all markets. Il Palagio produces a white, a rosé, and four red blends, including one Chianti DOCG, each with a different name and label design. In fact, wine made by Sting on his Tuscan estate is often recognized as some of Italy’s finest.

Since the 1980s Sting has answered the call and given his talents to help people in need and a planet in crisis. He stepped in for victims of natural disasters like the 2004 tsunami and Hurricane Sandy.

He has called attention to man-made calamities like deforestation, hunger, human rights atrocities…even the loss of our bees.  And he lent his talents to give financial and emotional support to victims of terror, from the 2001 World Trade Center attack to the mass shooting at the Bataclan night club in Paris, where he first performed in 1979. In 2011, Sting was named by Time magazine as one of the 100 most influential people in the world.

Sting has jumped with both feet into the world of musicals. He wrote the original music and lyrics for The Last Ship, an original musical. The musical was inspired by Sting’s own childhood experiences and the shipbuilding industry.

As a boy, Sting reports waking up every morning to the sounds of one of the biggest shipyards in the world situated just at the end of his street. Practically everyone in town worked at the shipyard, but even from a young age Sting says he knew it was the last thing he wanted for himself.

“It was a dark, terrifying place with an awful health and safety record, with terrible chemicals. People got diseases, and industrial accidents occurred. So, I did everything I could not have that as my destiny,” he told The National’s Susan Ormiston in an interview in Toronto. The Last Ship premiered in Chicago during the summer of 2014 before moving to Broadway that September, closing after a little more than four months. It was subsequently staged in Salt Lake City during the fall of 2016, in Finland during the fall of 2017 and in the U.K. and Ireland during 2018. “I think it’s a real story,” Sting says. “It’s about real issues. It’s not a fairy tale or Disney property, you know? It’s something that’s relevant. I think people find resonance in it. That’s unusual in a musical. It’s also telling the story of the community I came from. There’s probably more of me in it than I intended, but that’s OK. I’m enjoying the hell out of it.”

The New York Times called it an “ambitious, earnest musical … (that’s) buoyed by a seductive score that ranks among the best composed by a rock or pop figure for Broadway.” 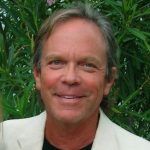 Jonathan Micocci is president of GRAND Media. He’s a native of Washington DC but can be found at home in Florida when he’s not visiting his grandkids in California.