Posted on September 2, 2019 by Christine Crosby in children, elder, generations, GRANDparent of the Year, Learn With Grandma, Valerie Wood-Gaiger

Over the years GRAND Magazine has saluted some very special grandparents as our GRANDparent of the Year. This year we are thrilled to introduce you to a lady that certainly deserves this honor.

Valerie Wood-Gaiger MBE (An MBE is a British honor that is awarded to a person by the King or Queen for a particular achievement. MBE is an abbreviation for ‘Member of the Order of the British Empire’. Valerie received her medal in Buckingham Palace from Prince Charles who has a home in her village of Myddfai in The Brecon Beacons National Park in Wales.

She is an international ball of fire when it comes to grandparents and children.

Valerie, aka Val, lives in the Welsh hills of the United Kingdom. She is 78 years old, single and says she’s retired, but I happen to think she is anything, but retired. She is an international ball of fire when it comes to grandparents and children.

Note: Feature photo taken in Village Hall. Valerie is wearing her MBE medal because the Prince of Wales – Prince Charles and Carmella were on a visit.

Valerie has three children, seven grandchildren, and seven great-grandchildren. Val said, “I didn’t mind becoming a great granny, but it was hard to accept that my sons had become grandfathers.” Two of Valerie’s grandchildren live in Ithaca, NY.

She is the founder of Learn with Grandma, a network of 49 Facebook groups around the world. Twenty-Four of which are in Africa. All groups started by people for their country.

Full disclosure: GRAND Magazine is the USA representative. Literally, when Valerie contacted us, we jumped at the chance to be part of such an innovative program.

Valerie observed that not many elders were using the internet, but the younger people sure were. She also believed that the internet was dividing the generations. Fortunately for us all, she had an idea of how she could use the internet to help bridge the generations, and she got excited!

Learn with Grandma’s mission is to help empower young and old by uniting the generations; sharing ideas of how to use the internet as a bridge; to unite generations and help break down the digital age gap by sharing skills, love and knowledge across the generations in ways that are Achievable, affordable, sustainable and fun!

According to Valerie, “Learn with Grandma (LWG) has no income. My only income is the UK state pension. I cannot fund projects, so I decided that the best way I can help is by sharing ideas and making practical suggestions on how people of varied ages could connect and encourage self-sufficiency.”

For many years, Valerie worked on European Union projects. She stated, “They were all enjoyable, but not sustainable. All came to an end when the funding stopped.”

After open-heart surgery followed by a cardiac arrest in 2013, her heart surgeon told her to keep her mind and body active and that she would live a longer happier life if she did. Valerie reflects, “That timeout gave me time to decide what I wanted to spend the rest of my life promoting inter-generational learning and active aging.”

In 2014, after returning from volunteering in Uganda for two months, she started floating her ideas on Facebook just to see the response. Never in her wildest dreams did she plan to start an international network.

Today, there are 48 Learn with Grandma Groups around the world. She has 23 groups in Africa. They all signed up after her visit to Uganda in 2014. As Valerie says, “The Learn with Grandma concept is as old as the hills – partly based on Psalm 78 which tells us to teach our children what our fathers taught us. Elders have many skills and knowledge that younger people need. The elders also need to use this modern technology to communicate, so all generations can learn from each other.”

When asked, what does Learn with Grandma do besides share stories of how grandparents are interacting, learning from and teaching their grandchildren? Valerie responded, “We encourage and help people organize e-learning conferences in their country. We can and should do this in as many countries as possible. The vast majority of teachers cannot afford to attend big international conferences. National conferences get the message down to the grassroots in an efficient and cost-effective way. We encourage members to be avid readers. Like most grandparents, I do like a ‘proper’ book, especially at bedtime, but I now also like e-books. In fact, I love that e-books can do so much that is impossible with a printed book like film and audio. The best way to learn a language is to hear it spoken by a first language speaker.”

Today, there are several good projects happening in many countries and LWG is helping to share the good news and ideas that are achievable, affordable and sustainable.

Val is spreading her message as far as she can. When the seed falls on good ground Val is inspired to keep on trying. Sarah Lewis, a primary teacher in Wales, is a good example.

In a note to Valerie, Sarah said, “I just want to say thank you. I heard you speak last summer. You inspired me to set up intergenerational groups in my community. We now have a choir moving from strength-to-strength, a ukulele group; children being led by people over the age of 60 and a gardening club for seven to 90-year-olds. The oldest member of the choir is 93-years-young and the youngest member is seven. It’s all thanks to you and your truly inspirational words.  A very heartfelt thank you to you, Valerie.’

Sarah took action. This project won an award for the Best Community Project in Wales.

Sarah & Valerie are now working on the next project to create an ebook about a local hero.
Valerie believes and we agree, we can all learn from each other and have fun together. Val admits that she does not know how to go about doing everything to make LWG successful. But over the months that GRAND Magazine has been in contact with her, we’re confident she will find a way.

Now Val has another ambition. She wants to turn Learn with Grandma into an International Foundation that will go on. Needs will change but as long as our planet survives there will be grandparents and children and things we can do to improve our communities 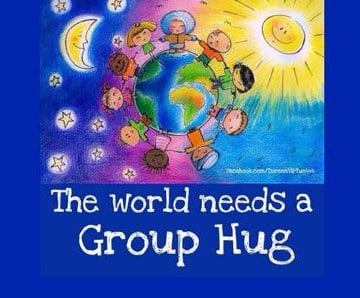 You can contribute via https://localgiving.org/learn-with-grandma

Nominations are now being accepted for the 2019 Orange County Grandparent of the Year.