Does Your Grandchild Need Your Help?

Does your Grandchild need your help?

What happened to the values instilled in previous generations?

Did we lose the art of conversation to an electronic device?  What about personal responsibility?  It would appear finger-pointing is the new normal. Correct me if I’m wrong here, but I don’t think they’ve been watered down just a little. In fact, at times, I feel like they’ve downright vanished.  But, how?  Why?  I had no simple answer, so I researched. However, when finding the amazing work of Dr. Bruce Lipton, PhD., I learned something that was even more disturbing.

This trend will not be easily reversed.

In fact, it appears it won’t reverse course without the influence of grandparents.

“But, when we put a teacher and a behavioral researcher together, something magical was created.”

When researching Dr. Lipton, cellular biologist and leading authority in epigenetics, I was disturbed to learn that 95% of one’s behavioral patterns are established by the age of 7.  Yes, 7! That scared the heck out of me because at the time, my own kids were already past this age.

Was I doomed as a parent? As a grandparent?

Are my kids doomed to mediocrity at best?

Surely, this can’t be accurate.  But, after further research from Dr. Joe Dispenza and behavioral researchers, this was indeed a scientific fact.

It’s simply due to brainwave changes and has nothing to do with intelligence.

We shift into an alpha brainwave around the age of 7 and this locks everything the child has learned as his/her truth. This truth shows up in the child’s behavioral patterns; one’s personality. Here is the crux of the problem. It doesn’t have to be a positive truth.

“…we could never have predicted how quickly the kids learn from the books and fall in love with the characters.”

Have you known any friends, neighbors or family members who are abusive, drink too much, have money problems or insecurity issues?  We all know the phrase, “the apple doesn’t fall far from the tree.”

So, what can a grandparent do?

How can we reverse this downward spiral?

Until now, there was no answer; no magic pill; no secret bullet.  But, when we put a teacher and a behavioral researcher together, something magical was created. 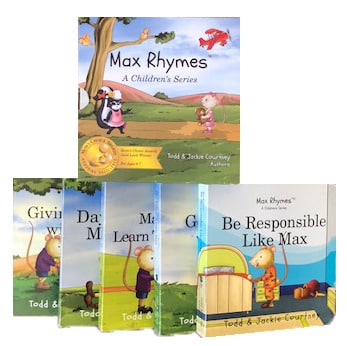 Max Rhymes: The first and only nursery rhymes to instinctively teach positive behavioral patterns for ages 0-7.

How do they work?   Honestly, I think we got lucky. On one hand, we did set out to tackle, what many call, an epidemic. However, we could never have predicted how quickly the kids learn from the books and fall in love with the characters.

Why grandparents? Because a gift from a grandparent is coveted. They want to learn from you and now they can, even if you live miles apart. 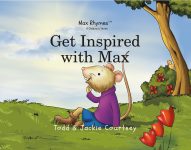 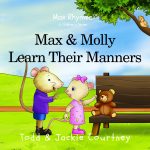 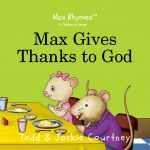 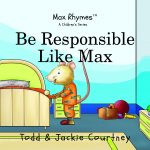 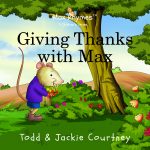 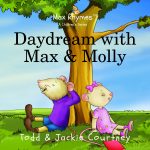 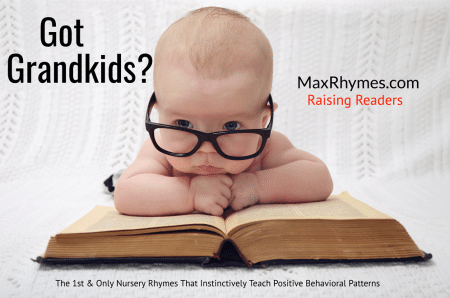 ABOUT THE AUTHORS – JACKIE AND TODD J. COURTNEY

Jackie, a 33 year credentialed teacher and Todd, a behavioral science researcher with no prior intentions of creating children’s books embarked on a journey to bring back our core values. Jackie and Todd have been married for almost 25 years and have three adult children.