Both of these books have the same target age range but cover very different subjects. Pushinka the Barking Fox is a true tale of set in Siberia while Giracula is a far-out story of a sweet tooth plagued giraffe. Enjoy these two new offerings for fall. 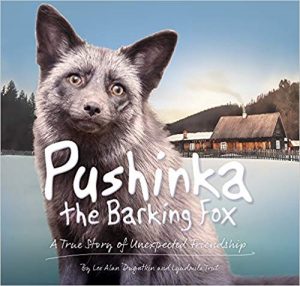 Pushinka the Barking Fox – A True Story of Unexpected Friendship

Pushinka’s life began on an experimental fox farm in Siberia. Scientists studied and selected the friendliest foxes born each year and bred them to continue producing increasingly friendly offspring. This is the story of one fox, Pushinka and a scientist, Lyudmila. They lived together in a two-bedroom house. Eventually, Pushinka has a litter of six puppies. They grow and flourish in the house.

Scientists continue to study the growing and changing relationship between Pushinka and Lyudmila. They are amazed when Pushinka presents her new pups to Lyudmila. Even more unheard of, Pushinka barks one day at an approaching stranger. Foxes don’t bark!

This is a love story between a domesticated fox and the woman she lives with and learns to love and trust. There is interesting information about the experiment and the tame foxes. Also lots of cute pictures of mom and her pups. This is a warm tale from the coldest region of Siberia.

Dr. Lee Alan Dugatkin studies animal behavior at the University of Louisville. He is the author of ten books on animals and their behavior.  Dr. Dugatkin has traveled around the United States and the world―including England, France, Austria, Romania, the Czech Republic,  Germany, and the United Arab Emirates―telling the story of the domesticated foxes of Siberia. 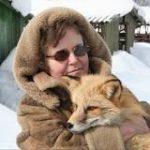 Dr. Lyudmila Trut is a biologist at the Institute of Cytology and Genetics in Novosibirsk, Russia. Dr. Trut is eighty-five years old, and she has been the lead researcher on the silver fox domestication experiment―internationally recognized as one of the most important experiments ever done on animals―since it began in 1959.

Drs. Dugatkin and Trut are co-authors of the award-winning book, How to Tame a Fox and Build a Dog (University of Chicago Press, 2017), which the New York Times Book review called “Sparkling… A story that is part science, part Russian fairy tale, and part spy thriller.” 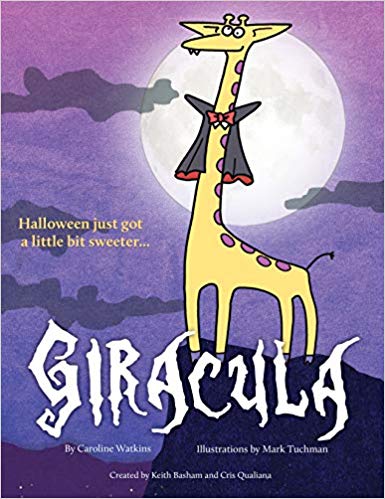 Just in time for Halloween is a book about a giraffe who is bitten by a vampire bat and suddenly has an insatiable sweet tooth. His quest for treats leads him to commit a few crimes to get to the tasty goods. When he is discovered at the bakery with scary cherry pie filling all over his mouth, the townspeople are in an uproar. He finds a friend in a little girl who listens to his story and has a plan to make everyone happy.

The illustrations are reminiscent of “The Simpsons” style and at times the rhymes seem a bit forced. All in all a fun book for young grands – especially those with a weakness for sugary delights. 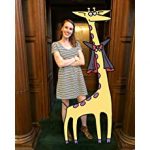 Caroline Watkins is the Assistant Publisher at Persnickety Press and now, a first-time author. From an early age, she was reading and writing and kept a copy of Matilda by Roald Dahl under her pillow. A graduate of UNC and Boston College, she turned her social work education into a career in children’s literature. Caroline lives in Raleigh, North Carolina. 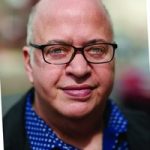 Mark Tuchman is the creative director of School Library Journal. At home, he is dad to three very creative children who direct him on his illustration projects. Most recently, he illustrated Lauren Wohl’s Raccoon River Kids Adventures series (also Persnickety Press). Mark’s publishing debut, many years ago, was a comic book about the beginnings―and unique educational philosophy―of his alma mater, Hampshire College. Mark and his family live in Brooklyn, New York.