As grandparents, there’s always an inclination on our part to spoil our grandchildren just a little bit, whether it’s behind parents’ backs (or sometimes in front of their faces!). Traditionally, this has taken the form of an extra serving of dessert, a piece of sweet candy, or staying up past bedtime.  Anything that will make the child’s time with us feel more special and fun.

But lately, I’ve seen an indulgence that has me a little bit concerned. I’ve seen grandchildren beg for, and grandparents concede to, extended screen time on computers, iPhones, and smartphones. The grandparents don’t want to upset the grandchild and much like that child’s parents, use the technology to make them behave or keep them quiet, especially in public spaces. But is extending screen-time really any different than other attempts on our part to curry favor with our grandchildren? And is it really bad for the child?

For one thing, the World Health Organization just released guidelines that suggest children one year and younger be given no screen time at all. And children under five-years-old be limited to one hour. Why? The organization expresses concerns that sedentary activity is unhealthy for the development of young, healthy minds. The group was clear to associate that other sedentary activities such as storytelling, reading, and prayer were fine.  It’s passive screen time, where children just observe and react to entertainment being fed to them, which has been seen to adversely affect young lives. ‘

There is also some evidence to suggest that the light illuminating from these screens can prevent the child’s brain from developing properly. Other concerns have linked fast motion graphics in games and movies to the development of ADHD in children.

It’s clear that grandparents today face a uniquely 21st-century conundrum: what do you do when your grandchild seeks more screen time from you than face time – and how do you effectively say no to their requests, without risking coming off as the “bad nana”?

The key is to package the limiting of their screen time with activities that will engage them in a different way. I like the recent Hyundai Santa Fe commercial where a family is shown having fun on their road trip, hiking by the shore, interacting with farm animals, sleeping under the stars and having to stop the car in front of a giant moose – much to the puzzlement of the aunt they’re traveling to visit who wonders aloud, during the ad’s voiceover, why they didn’t just simply fly.  It’s just those kinds of active and stimulating activities you have to provide your grandchildren that’ll make watching a four-inch screen seem much less inviting.

Make sure the time you spend with your grandchildren is quality time that both of you will remember for years to come. 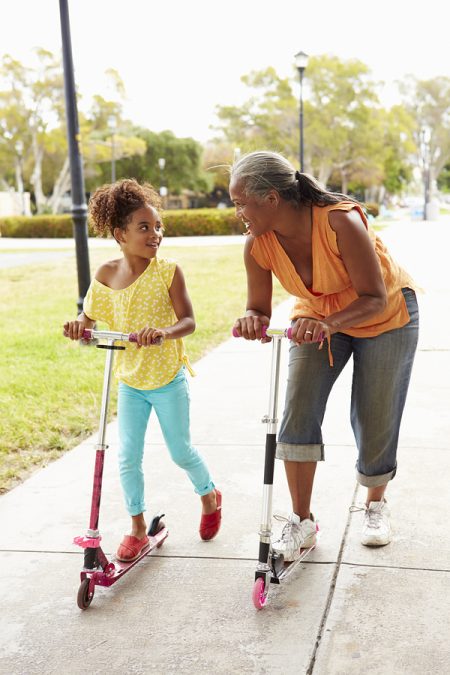 I should come clean here and admit my concern at seeing my own granddaughter’s embrace of a mobile device inspired me to start a non-profit that promotes taking journeys of discovery in a tech-free environment.  For sure, the foundation’s focus is on young people who are soon to become parents and not grandchildren per-se, but I’ve found many of the strategies we use to apply to anyone, of any age, who seeks to take a break from technology.

From the positive feedback we’ve had during our experiences, here are some tips for making sure you’re not the grandparent who falls into the trap of spoiling children with too much screen time.

Let your parenting child know about your concerns about the effect screen time can have on developing minds. Agree upon an allowed amount of screen time your grandchild can expect while under your auspices or better yet, see if you can get them to leave any electronic devices at home or put away during the extent of the visit.

Now that you’ve established screen time guidelines, make sure you have alternative activities on hand to engage your grandchild. Not every activity is going to capture their attention, so it’s best to have a menu of choices available. Remember, for your grandchild, discovering that other activities can be fun is going to take some doing.  For them, the fun has been narrowly defined by a tiny LCD screen. Show them that there’s a universe of fun available to them.

Be sure to be a participant in whatever activity you engage them with. You can’t expect to set a child in the corner with a toy and say, “go play,” and expect it to take hold.  Make companionship and co-discovery part of the fun experience. This will help them learn how exciting and rewarding interacting with others, face-to-face can be.

Be mindful of your own interactions with technology when in your grandchild’s presence. Carefully frame devices like phones, computers and even television as “tools” which are handy to use for a specific task and then put away, explaining that your time is way too valuable to sit on them all day.

If you must allow some screen time, be sure everyone agrees to the time limit.  Then make an alarm clock or egg timer “the bad guy” who determines when time is up. This way, you all appear to be in adherence to regulations and it’s not Grandma who said to stop.

Thankfully, the honeymoon period with our various smart devices seems to be coming to an end, as more of us are coming to understand that dependence on such electronics isn’t good for anyone, no matter what the age. Make sure the time you spend with your grandchildren is quality time that both of you will remember for years to come.

Marygrace Sexton is Founder of A-GAP, a 501(c) foundation that takes participants seeking to break from technology on a journey to clarity, unity & simplicity in a technology-free environment. She is also the founder and CEO of Natalie’s Orchid Island Juice Company, an authentic juice company headquartered in Fort Pierce, Florida.