Do You Know The Most Common Grandparent Name In Every State?

The Most Common Grandparent Name In Every State

Thanks to the folks at Coventry Direct, we now know the most popular grandparent names by state. The following are the results of a recent survey they conducted.

They say it takes a village to raise a child, and here at Coventry Direct, we know that grandparents make up a substantial portion of that ‘village’. From hosting holiday gatherings to being an unwavering source of love and support for your family, the relationship between a grandparent and their ‘grandbabies’ is one of life’s greatest treasures.

Interested to know what the top grandparent nicknames are in your neck of the woods? Read on!

Let’s start with the most used nicknames for Grandma.

Nana is the most common nickname for a Grandma in thirty-two states. But if someone doesn’t call their grandmother Nana, odds are they do call her Grammy or Gram, as these are relatively popular alternatives to Grandma, as well. Folks from Maine, New Hampshire, and Vermont love referring to their Grandmothers as Grammy, whereas those from New Mexico prefer the more casual alternatives of Gram and Grams.

As you might’ve suspected, many Southerners opt to call their grandmothers Mamaw and Mawmaw. Together, these two nicknames are most popular in seven states, including Arkansas, Mississippi, Louisiana, and West Virginia.

Papa was the most popular nickname for grandfathers in 36 out of 50 states!. California, Colorado, Texas, Florida, and Georgia are among the states where Papa is the top nickname used for Grandpa.

Other than Papa, Papaw and Pawpaw – who we suspect are married to Mamaw and Mawmaw – are relatively popular grandparent names, too. Together, Papaw and Pawpaw are most popular in 8 states, most of which are in the South. Papaw is the most commonly used name for Grandpa in Alabama, West Virginia, Louisiana, and Mississippi. As for the slightly less Southern alternative to Papaw (Pawpaw), it’s most popular in Arkansas, Indiana, Kentucky, and Tennessee.

So what are the top ten nicknames for Grandpa in the country, you ask? It turns out that Papa, Pop/Pop-Pop, Pawpaw, Granddad, Papaw, Grampy, Poppy, Grandfather, Abeulo or Abuelito, and Gramps all made the list.

Thanks, Coventry Direct for doing this survey and sharing with the world! 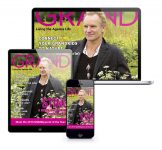 If you are a grandparent, you’ll want to get grand – America’s #1 resource just for grandparents – CLICK HERE

We still get a giggle from the name that was given to one of our friends years ago by her granddaughter. Get ready, you won’t believe it….It’s  Dumpy!  Can you believe it?  She actually goes by this name which is just another sign of the great love that grandparents have for their grandchildren!

GRAND Magazine has been compiling grandparent names since 2004 and that list is getting long. Check it out here