It was late August 1963. I was 12. I remember my father calling me into his room. The radio was on, and I heard cheering.  It was not a baseball game kind of cheer…it seemed louder and longer. It was a sustained roar.

My dad, aged 72 and blind, pointed in the direction of the radio with one hand, and put his other index finger to his lips…he was signaling me to be quiet…and to listen.

Next, I heard the voice.  A combination of speech and chanting. The cadence was like none I ever heard. The word music rose and fell, the power was like a wave…swelling and then resting, soon to rise again.

There, in that sun-bathed room, I was captured by the sound of that voice and felt the power of its persuasion. I never saw my father so attentive. All of his energy focused on listening to the words. 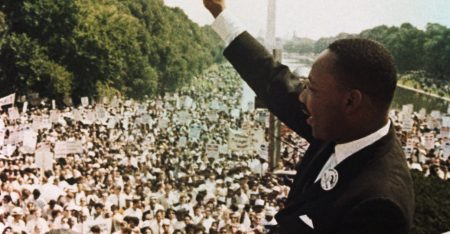 That speech on that sweltering August day ignited a charge of energy that would not be stopped…not by gushing fire hoses, snarling dogs, enraged threats, church bombs or snipers’ bullets.  At the tender age of 35, that eloquent preacher from Atlanta set in motion a flood of individual and collective actions that would change how people viewed not only our neighbors but ourselves.

The impact of that leader’s courage was felt in that tumultuous decade of the 1960s, and for generations to come.

In the 11-year period between 1957 and 1968, King traveled more than a half-million miles and spoke over twenty-five hundred times, appearing wherever there was an injustice to be protested, and action to be taken.

At age 36, he was the youngest person to be awarded the Nobel Prize for Peace. Although his life was cut short at age 39 by an assassin’s bullet in April 1968, Dr. King’s legacy lives in anyone who chooses to question those who would hold us captive to old ideas and discriminatory policies.

The fight for freedom has no limitations as long as the struggle for justice continues.

But there’s so much still to be accomplished. Justice is not static..it’s active, and must be actively asserted and strictly guarded every day. The fight for freedom has no limitations as long as the struggle for justice continues. Every generation has its opportunity and obligation to recognize problems and create solutions.

In memory and in tribute to those who marched, fought and sacrificed for the rights we hold dear, being responsible for voting citizens is one of our highest callings.

The courage to speak truth to power is one of democracy’s great freedoms. During my 40-plus year of professional life as both a teacher and a family policy advocate, I’ve learned that progress is not achieved by intention alone or in silence.  As examples to our children and grandchildren let’s commit to being ardent and assertive advocates.