The key to successful parent-grandparent relationships in two words

As my friend was recently introducing me to a friend of hers, she mentioned to him that I wrote an advice column for parents and grandparents. A grandfather himself, he peppered me with questions. “How long had I been writing ‘Ask Dr. Gramma Karen’”? Nine years. “How many columns have I written?” Around 250.

“Hmm,” he said, “that’s a lot of columns.” I pointed out that nine years is a lot of time. He looked thoughtful.

“He seemed intrigued by this notion of zipping it! and asked me to say more about it.”

He seemed genuinely interested, so I explained that although the issues sent to me by parents and grandparents looking for my advice are unique to their particular situation, there are some common themes. For example, in compiling my columns for publication into books, the root issues typically fit into one of five main categories: (1) Involvement/boundaries; (2) Communication; (3) Assumptions and expectations; (4) Power and control; (5) Values, beliefs, and principles.

Gist of advice for grandparents in two words

Okay,” he persisted, “what’s the bottom-line gist of your advice for grandparents?” “Well,” I said, “my general advice to grandparents distills to two words: Zip it! This means cease and desist. Stop talking. Bite your tongue.” He seemed intrigued by this notion of zipping it! and asked me to say more about it.

I elaborated: “Why should you zip it? Because, as a grandparent, you are not in the driver’s seat anymore. You are a passenger ‘riding along’ at the pleasure of the parents. When you were raising your own children, you made the rules. Now your job is to enforce the rules set down by your grown children regarding your grandchildren, whether you agree with them or not. To use a common idiom, ‘There’s a new sheriff in town,’ and it isn’t you.”

I further explained that Zipping it! can be hard to pull off, especially in light of the fact that the average age for becoming a grandparent is 50 for women, and 52 for men. This means that many grandparents are still parents themselves raising their own children.

So, it’s understandable that many grandparents find it challenging to move back and forth between being the rule maker and being expected to enforce the rules of the very people for whom they used to be the rule maker! And to complicate matters further, many times the grandparents don’t agree with the rules they are expected to enforce. Nevertheless, zipping it needs to prevail. 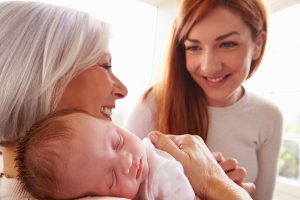 He was nodding in agreement, so I said, “Here are some phrases that are strong indicators that zipping it might be a wiser course of action than plowing ahead with unsolicited advice to the parents of your grandchildren: ‘I know you didn’t ask me, but . . .’ or ‘You really should . . . ’ or ‘Here’s what I did when raising my children . . . ’”

My advice is straightforward: if you want to be a welcomed and successful grandparent, practice zipping it. Yes, granted, you have lots of experience, and yes, you have what many would consider wisdom, but until such time as you are invited to share your experience and wisdom, zip it. (The only time to jump in uninvited is when the grandchildren’s health, safety, and well-being are at risk, a very rare occurrence.) You will know when you’ve been invited to “unzip” it when you are specifically asked for your opinion: “What do you think about . . .?”

“He looked crestfallen and commented that he wasn’t really good at zipping it and often found himself in hot water.”

We talked further about the unalterable fact that parents determine who has access to their kids, including grandparents, and under what circumstances. Therefore, if grandparents want to be in good stead and have the opportunity to enjoy wonderful and ongoing relationships with their grandchildren, then zipping it is worth doing. It’s really that simple. And difficult!

He looked crestfallen and commented that he wasn’t really good at zipping it and often found himself in hot water.

I pointed out that of course, any relationship is a two-way street, so lest grandparents feel I am singling them out as the sole source of conflict in parent-grandparent relationships, I am not. I also have two words of advice for parents: Lighten up! If the grandparents have loving intentions, parents should give them a break when they don’t exactly follow directives.

Kids are very resilient and can easily survive occasional deviations in their nap times or eating a forbidden dessert. If parents have enough trust to leave their children alone with the grandparents, then there will most likely be times when the advice to Lighten up! makes sense.

So, two words of advice: For grandparents, Zip it! For parents, Lighten up!”

By following their respective two words of advice, parent-grandparent relationships are enhanced. This increases the opportunities for grandchildren to witness and experience interactions between their parents and grandparents that are based on mutual respect, consideration, and kindness.

Karen L. Rancourt, Ph.D., writes an advice column for parents and grandparents at Mommybites.com. Her most recent book is, It’s All About Relationships: New Ways to Make Them Healthy and Fulfilling, at Home and at Work.