Buck is a big-hearted dog whose blissful domestic life gets turned upside down when he is suddenly uprooted from his California home and transplanted to the exotic wilds of the Alaskan Yukon in the 1890s.

As the newest rookie on a mail-delivery dog sled team, Buck experiences the adventure of a lifetime as he ultimately finds his true place in the world. KIDS FIRST! Film Critic Ruby A. comments, “My feelings about this movie are quite mixed. On one side, the use of CGI helps to portray the strong emotions of the dogs. On the other hand, there are many scenes containing brutal animal abuse that many audiences will find disturbing and unsettling.” Jolleen M. adds, “The Call of the Wild has such wonderful sets, cinematography, and CGI. Although the film is pleasing to watch, the plotline itself is predictable and redundant.

There are so many films out there about a man’s best friend and there is nothing in The Call of the Wild that sets it apart from them.” Damon F. wraps it up with, “The Call of the Wild is an amazing film based on a book with the same name by Jack London that follows the story of a massive, clumsy dog named Buck, who gets taken away from his master, is forced into slavery and struggles to try to discover his true destiny.” See their full reviews below.

My feelings about The Call of the Wild are quite mixed.  Mainly because of how effective the CGI is in portraying the strong emotions of the dogs—that is fine except when the dogs are abused, and that could be disturbing and unsettling for some audiences. However, overall the storyline of the movie is incredibly well-structured and detailed. 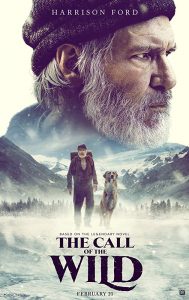 The Call of the Wild is about Buck, a fearless, strong dog who has been through so much in his life. After being shut out on the porch of his California home, Buck’s name is called and he finds himself in the hands of a dog seller, who locks him inside of a box for transport. A while later, he is recruited to pull a dogsled that delivers mail in Alaska. After a journey full of twists and turns, Buck discovers a whole new world with someone he loves and trusts by his side.

Some of the lead characters include John Thornton (Harrison Ford) Perrault (Omar Sy) and, of course, Buck. What really stands out is the CGI that is essential to express the emotions of the animals. It is really effective—the dogs look almost human! With such emotion in their eyes and their actions, there is barely anything that humans can’t relate to. (Except for the furriness!) The difference the CGI makes is in the emotional impact and how it helps the audience feel attached to the characters, and love for them, too. It improves the quality and aesthetic of the film, which makes the viewing experience vivid.

The Call of the Wild strongly conveys a message of how perseverance can make anyone a stronger, more intelligent person who can take on more difficult challenges than ever before. The film is successful in signifying this empowering lesson through symbolism and emotion. Audiences should beware of some aggressive behavior toward animals, and between other characters. Several weapons are used, such as a whip, a bat, and guns. Minimal amounts of blood are shown. There really isn’t any bad language, however.

The Call of the Wild has such wonderful sets, cinematography, and CGI. Although the film is pleasing to watch, the plotline itself is predictable and redundant. There are so many films out there about a man’s best friend and there is nothing in The Call of the Wild that sets it apart from them.

Based on the novel by Jack London, the storyline follows a dog named Buck who is stolen from his home on a ranch. He is sold to become a sled dog to deliver mail. Buck has many encounters with a man named John Thornton who eventually becomes Buck’s owner. They become very close and John takes him on a trip to the other side of the mountain in honor of his late son because it is a trip that he would have loved. Unfortunately, another man named Hal, whose judgment is clouded by greed, believes that John is taking this trip because he knows where the gold is. Hal follows him with ill intentions. Because of this whole journey Buck, in the end, finds where he belongs. 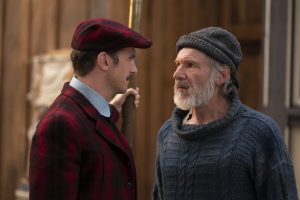 Harrison Ford, who plays John Thornton, embodies his role and shows the audience the bond that Thornton develops with Buck. It’s almost as if he sees Buck as his own son. The dog that plays Buck is named Buckley. He was a stray dog in Kansas and director Chris Sanders and his wife adopted him because he was the same breed as the dog in the novel. Buckley went from being on the streets to starring in a movie where he gives an amazing performance.

The story is set in Alaska where the scenery is quite beautiful. They capture the majesty of the frozen mountains and even the Aurora Borealis or Northern Lights. The CGI for the dogs is photorealistic. It is super cute how they show the dogs’ emotions by their facial expressions.

My favorite parts of this film are the various shots of the scenery. It really looks so beautiful in both the daytime and nighttime shots. I loved seeing it and it makes me want to visit those places.

The message of this film is about realizing that life is a journey and will be full of challenges, but through these challenges, you will find your place. If Buck wasn’t kidnapped from his home on the ranch he never would have truly been happy. Without the challenges that he faced, he would have never gotten his freedom in the wild. Everything happened for a reason, from being tortured to meeting John Thornton.

I give this film 3 out of 5 stars and recommend it for ages 7 to 18. Even adults might enjoy this film. The Call of the Wild comes out in theaters on February 21, 2020, so check it out!

The Call of the Wild is an amazing film based on a book with the same name by Jack London that follows the story of a massive, clumsy dog named Buck, who gets taken away from his master, is forced into slavery and struggles to try to discover his true destiny.

When the movie begins, Buck is taken away from his home and must adapt to his new environment in the wilderness. I really like the way the movie shows him changing to fit in. They use a giant, black, shadow of a wolf with glowing, yellow eyes. Every time Buck needs to make an important decision, the wolf is there leading him to the best path.

The animation and CGI in this movie are great; all the dogs look incredibly realistic. There is a dog fight between Buck and another dog that is very intense and the dogs act just like normal dogs act when fighting each other. The cinematography, with the visual effects, is really outstanding. Each different landscape has thousands of small details that showcase the amazing power of Mother Nature, which is exactly what the movie wants to show to us.

My favorite character is Buck the dog; he is a playful, kind, funny and all-around relatable character. Buck is the main character in the movie, even though he doesn’t talk. My favorite scene is when John Thornton, Buck’s final owner, is trying to drink his bottle of whiskey and Buck keeps knocking his glass out of his hand. Eventually, Buck steals the bottle and buries it in the yard. This scene was hilarious and it made me think that Buck was saying, “no drinking.”

There are two different messages that this movie offers. One is, “you don’t need to hurt people to be a leader; be kind and you will get your best team.” The second is, “Mother Nature is powerful, don’t try to take too much from it, only take what you need so the world can stay as beautiful as it is today.”

I rate this movie 5 out of 5 stars and recommend it for ages 8 to18 because some jokes most kids won’t understand. This film comes out in theaters on February 21, 2020. Look for it.

Introducing the ‘Grandparents’ Academy’ - But Not THE GRANDparents Academy

Manage Your Fear In The Time Of COVID-19