Introducing the ‘Grandparents’ Academy’ – But Not THE GRANDparents Academy

Law and order is on the verge of breaking down — within the confines of my own house. My two kids, 11 and 13, aren’t just cooped up; they’re in full revolt. They have some homework assignments to do but no regular online classes to engage them. So my wife and I are taking shifts, almost like prison guards, imposing TV shutdowns and mandatory yard time.

Our parents — the kids’ grandparents — are also bottled up. My mom and stepdad are holed up in the Berkshires, on a lonely mountain. They barely ever see another person. The isolation is taking a toll, but it’s more than that. I think, on some level, they feel rather expendable. And who could blame them? The young keep telling one another: Things are OK; only the old people will die.

So my wife came up with an idea: Why don’t we connect these two generations? Her notion was to conscript the grandparents as teachers. We pooled a bunch of kids from our neighborhood and their grandparents and formed an online school. We called it Grandparents’ Academy. Had a nice ring to it. Yes, even in the face of the apocalypse, branding matters.

Setting the whole thing up was surprisingly simple. We did it in less than 24 hours. We created a Google calendar and asked the grandparents to pick time slots for weekly and bi-weekly classes. They could teach, well … anything they wanted. In no time, we had a schedule.

The grandparents offered classes on the Bill of Rights, game theory, number patterns, presidential history, anthropology, law, and conversational Polish. Some were bona fide experts and others were just folks who’d read a lot of books. There was no screening of candidates. No syllabuses. No reading lists. Just: Can you start tomorrow?

I had my doubts.

We all know that moment when a grandparent offers some unsolicited advice — “Well, in my day …” — and almost instantly the kids’ eyes glaze over. When the first class started, on the Bill of Rights, I was kind of holding my breath.

The teacher, my father, began a discussion of Feiner vs. New York, the classic 1951 Supreme Court case involving freedom of speech. He laid out the facts. There was a guy, Feiner, who started making a speech on a street corner denouncing President Harry Truman. People got angry. A fight almost broke out. “So,” my dad said, “should this guy be allowed to make his speech, even if it provokes a violent reaction?”

Continue to the original article in The New York Times 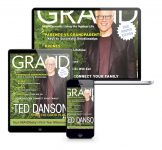 By the way, one of the best ways to get grandparents started on a computer is to give them free access to GRAND Magazine. It’s easy to navigate and grandparents love it!  Just click on this link www.ReadGrand.com