At three years old, my grandson, Ben is just learning to dress himself and does so with determination and pride, while my 86 year-old father needs more help dressing each day. It’s an effort for him to get into his coat, his shoulders hunched, his arms no longer able to grab blindly behind his back. I help him, guiding each hand to the sleeve, pulling up his collar, meeting buttons with holes. How still he stands, weary and resigned, waiting for me to finish. My grandson, meanwhile, has learned his own new technique. He throws his jacket upside down on the floor and grabs it, flipping it wildly over his head until his arms wiggle their way through the sleeves and the jacket settles naturally on his shoulders. Then he jumps up and down with glee, squirms and stomps impatiently while I match zipper to track, wanting me to be done so he can run off and play.

Next, the gloves. I offer them to my dad, who holds out his shaky hand and struggles to slip one and then the other into the worn black leather. My grandson, though, resists, not wanting to separate his thumb and fingers before setting them in place in his new blue mittens. “My hands not cold,” he shouts. And it’s true- his baby hands are warm and supple, not stiff and gnarled with age like his great-grandfather’s.  Those healing hands, whose clean, neat nails gleamed from weekly manicures, would fly across the pages of small white pads scribbling illegible orders. But lately, my father seems uncertain with pen in hand; his fingers tremble slightly and his once-bold signature has become less clear.

“His hearing is acute and accurate, while for my dad, the sounds of daily life are muffled and muted much of the time.”

Like his vision. A problem with his retina many years ago cost my father his sight in one eye, and now the natural process of aging is dimming his view of the world through the other. A learned man who loved reading Churchill and often quoted Shakespeare knew operas by heart and symphonies by ear, my father can no longer discern clearly the words of a newspaper despite corrective lenses. Behind his dark-rimmed glasses, his small brown eyes are dull and don’t match those of my grandson’s, big and bright with curiosity about the world. A city kid, he’s learning to read at his young age from the signs of the subway stations. What my dad can’t see two feet away, Ben can see in twenty. He can also hear a train whistle miles away or his baby sister’s cry before I even register the sound.  His hearing is acute and accurate, while for my dad, the sounds of daily life are muffled and muted much of the time. Hearing aids worn for years help him to communicate his needs but it’s hard to engage him in long conversations.

Though that’s probably about his mind as well.  That mind, which mastered the study of medicine six decades ago, is slipping now, his memory mixing up the now and then, the yesterdays and today. Not too long ago, my father learned to use the computer, quite eager to join the 21st Century technology revolution. He would sit, slouched over, grim-faced with purpose, and peck at the keys with one unsteady finger, no doubt thinking about the typewriters of the past. But recently he’s lost interest, claiming it too much effort, the keyboard and commands too confusing for his aging brain.

Confusing for an octogenarian certainly, but for a three-year-old child- what fun!  Ben was introduced to the computer as an infant, cradled in his father’s lap, mesmerized by the images on the screen of that magical electronic device. By now he’s mastered the basics and sits by himself on the desk chair, tall and straight and serious, his eyes darting over the keyboard, looking for symbols familiar to him. Then finding them, he uses his little pointer finger to tap the keys of the four letters that spell his password, his eyes lighting up and mouth widening into a big grin as he succeeds. Sometimes he’ll yell, “Wake up, computer!” in his hurry to get started as he maneuvers the mouse into action, clicking on his favorite images of subways and trains. Like them, his brain is racing full throttle, its neurons firing rapidly across synapses.

So different from my dad’s. Brain signals which once automatically directed his movements seem to short-circuit periodically, and he has to make a real effort to coordinate his actions. He’s unsteady on his feet; getting out of a chair or into a car requires time and concentration. Stand, pivot, bend, sit- nothing like the seconds it takes for a three-year-old to spring into action. Or pull on a hat. For my grandson, it’s a brightly patterned Peruvian with tassels that bounce freely when he walks. My dad’s hat is a classic, a Russian Cossack style made from black Persian lamb. He holds it with affection, rubbing the soft rim for a moment before placing it firmly on his head and signaling a nod.  At last, he’s ready to go out the door.

“I watch them both, taking mental note of the 83-year age span. Here I am, somewhere in the middle, buckling them into seatbelts, cutting their food and buttering their bread, holding hands while we walk, dressing them on a cold winter’s day. Babysitting for both.”

His walker waits nearby, its legs fitted with bright yellow tennis balls to help him roll along.  Ben rolls along on the pavement, too, but on a tot-sized scooter, gliding so fast that I have to run to keep up with him. Just the opposite of my father, who needs me standing near as he walks, hesitating over each step.  The irony isn’t lost on me. Not so long ago, it seems, my grandchild was doing the same, toddling unevenly with his first real baby steps. Now he’s found his balance and is running with the wind, while my dad leans on me, watching from the sidelines. 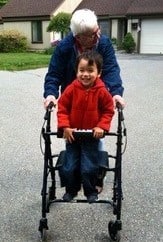 My father and grandson

I watch them both, taking mental note of the 83 year age span. Here I am, somewhere in the middle, buckling them into seatbelts, cutting their food and buttering their bread, holding hands while we walk, dressing them on a cold winter’s day. Babysitting for both.

Last month I did just that. Worried that he would not be safe home alone, I spent the night at my father’s house. It was a hard assignment for me; I wasn’t comfortable with the roles reversed and felt a strange melancholy. This is not how it should be, I mused,  thinking back to the weekend before when my grandson was visiting. Pure joy in the air then, despite typical toddler bedtime battles. Oh, how loudly Ben asserts, “No nap!”  after lunch and fights about going off to bed at night, unwilling to close his little eyes and shut out the day’s adventure. For my dad, though, sleep is a release. He dozes off frequently during the day and gets into bed willingly at night, more than ready to put his mind at rest and his body at ease.

But life is not easy for my dad. He doesn’t smile much these days. My grandson’s smile is bright and beautiful, his baby teeth straight and strong and so white compared to my father’s, who’s are yellowed with age and weakened by decades of dental work. Eating is becoming a challenge. When we sit down to a meal, he tucks a napkin under his collar to avoid staining his shirt. Fork and spoon wobble in his grasp. But Ben no longer needs something snapped around his neck to catch his spills, and he’s become adept at using utensils. Eating is a fun experience for him. He enjoys biting into a juicy piece of watermelon, munching on pretzels, licking an ice cream cone- the same simple pleasures that are eluding my father now.

When will this end, and how?  I know the answer, of course. My father will grow weaker and decline while my grandson grows strong and thrives. I will mourn the losses of one, celebrate the milestones of the other. New, colorful memories will fill the photo albums in my mind. There, my father is once again young and vibrant, standing proud in his starched white lab coat, teaching me to ski and swim and play tennis, walking me down the aisle, showing my children how to plant potatoes and pick blueberries, holding his first great-grandchild in his arms. This child, Ben, who will know my father for only five years but will continue to hear stories about him for years to come.

“Marvelous” was one of my dad’s favorite words. Life and love, from generation to generation. Marvelous, indeed.

ABOUT THE AUTHOR – Deborah Levin

Deborah Levin lives in Westchester County, NY with her husband and lovable Labradoodle. Her work has been published in the New York Times and Clinical Social Work journals, Grown and Flown. Pulse and GRAND Magazine.