Posted on May 22, 2020 by Christine Crosby in grandchildren, Tabatha Rosproy, teacher of the year

Cover image by teacher Tabatha Rosproy, 2020 National Teacher of the Year, is shown with her pre-school students in Winfield, Kansas on March 12, 2020.  This article originally appeared here
Tabatha Rosproy/AP
BY HEATHER HOLLINGSWORTH / AP

After a school year of unprecedented disruptions, Rosproy was chosen as the 2020 National Teacher of the Year for bridging the worlds of her community’s oldest and youngest. Her selection from among 55 award-winning teachers around the country was announced Thursday by the Council of Chief State School Officers, with the selection committee praising her in a statement for embodying “hope and inspiration.”

The Winfield school district in which Rosproy teaches established the early childhood program two years ago inside Cumbernauld Village, a retirement community and nursing home that sits on 44 acres (17.8 hectares) in south-central Kansas. One year into the partnership, the program boasted the highest preschool literacy and math scores in the district. But more than that, Rosproy said, her students were “well connected and well-loved” and the residents engaged as they snuggled with children while reading stories to them.

“Many of them don’t live near their own grandchildren or don’t have grandchildren,” Rosproy said. “They felt so fortunate to be near the joy and livelihood of children.”

Intergenerational programs have existed in various forms for over a century, with more than 100 in existence, said Donna Butts, executive director of Generations United, which advocates for them. Some combine child care with adult daycare, while others house after-school programs in senior facilities or senior programs inside high schools.

Read more: Time for Kids Launches Free Digital Library for Those Affected Globally by School Closures During the Coronavirus Pandemic 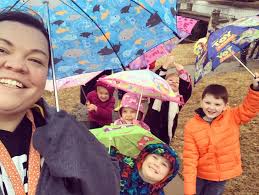 Many have been closed amid the virus, although some with separate entrances have been allowed to continue operating with restrictions. Despite the challenges, Butts sees hope for the future, noting that the group’s own polling shows public support for the model. She said older adults who are engaged with children are less depressed and report having more of a reason to live.

“Isolation,” she said, “is so harmful to older adults but also for younger people.”

At Cumbernauld Village, the residents — Rosproy called them “grandparents” — joined the youngsters as they planted in the garden and played bingo and the beanbag game cornhole. They also watched from their windows as the children leaped into piles of leaves, took walks in the rain clad in galoshes, and made snowmen.

Thank you, Jack Levine for sharing this important news about the 2020 Teacher of the Year with GRAND Magazine!