Posted on July 12, 2020 by Christine Crosby in civil rights, Maya Angelou, Oprah Winfrey, phenomenal woman, still I rise, The heart of the woman

“There is no greater agony than bearing an untold story inside you.”
― Maya Angelou, I Know Why the Caged Bird Sings

Maya Angelou is the poet laureate of my life. As an English major, I cherished the words of I Know Why the Caged Bird Sings – the words opening my heart and daring me to think I could do and be more. As I moved through life and she wrote about having her son as a teenager, and her complicated relationship with her oft-missing mom, I felt understood.

Angelou was multi-dimensional, with a career as a singer, actor, screenwriter and director. A civil rights activist who was friends with both Malcom X and Martin Luther King. She earned Tony and Emmy nominations, a Pulitzer Prize and a Grammy award. Angelou even authored cookbooks focused on health. But in interviews, her greatest accomplishments and influences were her family – and that is the little-known side of Maya Angelou!

A child of divorce, Maya Angelou went to live with her father and was very close to her grandmother. On a visit with her mother and her boyfriend, Angelou was raped by the boyfriend who was later murdered by her family members. She was so traumatized by the experience she was mute for nearly five years.

Maya Angelou is quoted as saying, “My mom was a terrible parent of young children. And thank God—I thank God every time I think of it—I was sent to my paternal grandmother.” 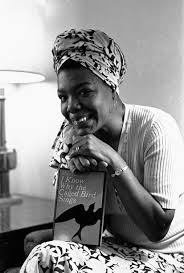 As a teenage mother to her son, Guy Johnson, Maya Angelou worked a number of jobs to support them both, including a stint as a cable car conductor in San Francisco. She has said of her son, who is also an author, he is her “monument in the world.”

It is her role as grandmother we have heard little about. In 1981, Angelou’s only grandchild, Colin, was kidnapped by his mother following a weekend visitation. This would lead her on a four-year search to bring him home. When her son exhausted his resources, she spent hundreds of thousands of dollars on private detectives and used her speaking platform to ask for help. Through a source who saw her speak, she found her grandson and brought him home.

“Can you imagine the feeling, to be walking out of a store and see someone with your grandchild’s picture on the side of a milk carton or a shopping bag?  It’s the most outrageous thing, I mean it’s all you can do to keep from going up to that person who’s got the bagful of potato chips and saying, ‘That’s mine!’ “

We celebrate this “phenomenal woman” and her many lives, her vivid words, and her roles as daughter, mother, and grandmother.

Just why my head’s not bowed.

I don’t shout or jump about

Or have to talk real loud.

When you see me passing,

It ought to make you proud.

The bend of my hair,

the palm of my hand,

The need for my care.

’Cause I’m a woman

Phenomenal Woman, And Still I Rise, 1978

African clothing was a part of Maya’s wardrobe. Her son, Guy, talked about how his mother would come to his school wearing African garb and kids would make fun of him. She would say, “This is your history, you come from kings and queens” and he would think, “It’s unfortunate, my mother is demented.”

(Excerpted from Encyclopedia of World Biography)

Maya Angelou was born Marguerite Johnson on April 4, 1928, in St. Louis, Missouri. After her parents’ marriage ended, she and her brother, Bailey (who gave her the name “Maya”), were sent to rural Stamps, Arkansas, to live with their grandmother, who owned a general store. Although her grandmother helped her develop pride and self-confidence, Angelou was devastated when she was raped at the age of eight by her mother’s boyfriend while on a visit to St. Louis. After she testified against the man, several of her uncles beat him to death. Believing that she had caused the man’s death by speaking his name, Angelou refused to speak for approximately five years. She attended public schools in Arkansas and later California. While still in high school she became the first-ever African American female streetcar conductor in San Francisco, California. She gave birth to a son at age sixteen. In 1950 she married Tosh Angelos, a Greek sailor, but the marriage lasted only a few years.

Later Angelou studied dance and drama and went on to a career in theater. She appeared in Porgy and Bess, which gave performances in twenty-two countries. She also acted in several plays on and off-Broadway, including Cabaret for Freedom, which she wrote with Godfrey Cambridge. During the early 1960s, Angelou lived in Cairo, Egypt, where she was the associate editor of The Arab Observer. During this time, she also contributed articles to The Ghanaian Times and was featured on the Ghanaian Broadcasting Corporation programming in Accra, Ghana. During the mid-1960s she became assistant administrator of the School of Music and Drama at the University of Ghana. She was the feature editor of the African Review in Accra from 1964 to 1966.

According to John Nichols, “She chronicled the anti-colonial struggle in Africa (as the only woman editor of the Arab Observer newspaper); she knew Nelson Mandela before the South African freedom fighter began his long captivity; in Accra, she was part of an expatriate community that included W.E.B. Du Bois; she joined Malcolm X in planning for an Organization of Afro-American Unity; and she personally lobbied legislators on behalf of marriage equality—reminding them, “To love someone takes a lot of courage. So how much more is one challenged when the love is of the same sex and the laws say, ‘I forbid you from loving this person’?”

On the Pulse of Morning is a poem by Maya Angelou that she read at the first inauguration of President Bill Clinton on January 20, 1993. With her public recitation, Angelou became the second poet in history to read a poem at a presidential inauguration, and the first African American and woman.

Success as an author

I Know Why the Caged Bird Sings (1970), the first in a series of Angelou’s autobiographical (telling the story of her own life) works, was a huge success. It describes Angelou’s life up to age sixteen, providing a child’s point of view about the confusing world of adults. The book concludes with Angelou having regained her self-esteem and caring for her newborn son. In addition to being a sharp account of an African American girl’s coming of age, this work offers insights into the social and political climate of the 1930s.

Her next autobiographical work, Gather Together in My Name (1974), covers the period immediately after the birth of her son Guy and describes her struggle to care for him as a single parent. Singin’ and Swingin’ and Gettin’ Merry Like Christmas (1976) describes Angelou’s experiences on the stage and concludes with her return from the international tour of Porgy and Bess. The Heart of A Woman (1981) shows the mature Angelou becoming more comfortable with her creativity and her success. All God’s Children Need Traveling Shoes (1986) recalls her four-year stay in Ghana. Angelou wrote about other subjects as well, including a children’s book entitled Kofi and His Magic (1996).

Call out:  “I’m not modest,” she told The Associated Press in 2013. “I have no modesty. Modesty is a learned behavior. But I do pray for humility because humility comes from the inside out.”

Maya’s book editor, Robert Loomis, revealed that she would rent a hotel room and hibernate to write. All she would have was a Bible, thesaurus, playing cards, and hard liquor to finish her work

She danced in various nightclubs in New York City to earn a living, including the famous Purple Onion. From 1954-55, the calypso performer went on a Europe tour, accompanying the crew of the musical, Porgy and Bess.

Angelou also worked in television as a writer-producer for 20th Century-Fox, from which her full-length feature film Sister, Sister received critical praise. In addition, she wrote the screenplays Georgia, Georgia and All Day Long along with television scripts for Sister, Sister and the series premiere of Brewster Place. She wrote, produced, and hosted the National Educational Television series Blacks! Blues! Black! She also co-starred in the motion picture How to Make an American Quilt in 1995. Angelou made her first attempt at film directing with the feature-length movie Down in the Delta (1998). The film told the story of a seventy-year-old woman and her personal journey. Angelou found directing to be a much different experience from writing because with directing you have “ninety crew and the cast and the sets and lights and the sound.”

Click here to read more about Maya Angelou from Encyclopedia of World Biographies.