TRAVEL ON THE OPEN ROAD

My husband, Ira, and I frequently follow Walt Whitman’s timeless advice, “I take to the open road, healthy, free, the world before me.” Last fall, our road trip included stops at the Great Sand Dunes National Park and two northern New Mexico cities, Santa Fe and Taos. It was an eclectic mix of culture, history, and food, with a splash of natural beauty at elevations of 7,000 feet above sea level.

Decades ago, I learned that the tallest sand dunes in North America are located in a remote part of southern Colorado. Finding a way to conveniently loop this national park into a road trip itinerary took longer than I anticipated. In retrospect, we should have allotted more time to explore this spectacular place, which was formed approximately 440,000 years ago when the dunes were created by wind, water movement, erosion, freezing, and thawing.

We followed the park ranger’s suggestion to drive our four-wheel-drive vehicle on the Medano Pass Primitive Road to explore Sand Pit and Castle Creek and also to spend time at Zapata Falls, approximately 8 miles outside the national park. While we witnessed cars trying to make both of these drives on rudimentary surfaces, we don’t recommend it. Disappointingly, it was necessary to walk in a creek to actually see the waterfall. Ira braved the frigid water to capture our digital images since I wasn’t wearing waterproof boots.

Paved roadways access the more popular areas that are considerably easier to navigate. There are endless ways to explore the 30 square miles of multiple ecosystems, including dune fields and forested trails. If you love the outdoors, I recommend spending more than one day.

Instead of staying in a motel, we spent a night at the Zapata Ranch, a 103,000-acre working bison and cattle ranch owned by The Nature Conservancy and managed by Ranchlands. Our single night accommodations included a family-style dinner, breakfast, and brown bag lunch. Most guests come for the multi-day dude ranch experience promoting memorable trail rides to the Great Sand Dunes, tours of the bison ranch, and an assortment of activities. The Zapata Ranch has a limited season running from the beginning of March through the end of October.

Before continuing our journey to Santa Fe the next morning, we participated in an informative bison ranch tour. One highlight was witnessing several bison rolling in the dirt. Our guide used the term “wallowing” to describe this behavior. The bison do this to create a dirt barrier that will limit ticks and lice from adhering to their fur. During mating season, male bison may wallow in their urine to announce their sexual condition to competing males.

This wasn’t the first time we were drawn to this high altitude city, 7,000 feet above sea level, thriving on Hispanic, Anglo, and Native American cultures. History, art, and food were on our radar. After checking into the Inn on the Alameda, we reacquainted ourselves with the city by walking to the historic downtown. Santa Fe’s Plaza, initially built-in 1610, makes it the second oldest city in the United States. Along the way, we admired the Southwestern adobe architecture currently filled with shops, restaurants, and museums. To escape the sun and to learn more about the region’s history, we visited the New Mexico History Museum.

Few cities have a museum complex where locals and visitors can explore several buildings plus a botanical garden. We drove a short distance to Museum Hill, where our interests in Native American art were fulfilled at the Museum of Indian Arts and Culture. By learning more about the history of indigenous pottery, we could better appreciate the handiwork of modern artisans.

Also on our to-do list was the Georgia O’Keeffe Museum, showcasing this notable artist’s life and work. Many single out O’Keeffe as the “Mother of American Modernism.” An informative video illustrating O’Keeffe’s rise to fame and her relationship with Alfred Stieglitz put her artwork into perspective.

From past experience, we knew it was best to walk from our conveniently located hotel to Canyon Road since parking is limited at this popular attraction. If you appreciate art, it is easy to wander for hours between Canyon Road galleries representing multiple artists and individually owned shops. I personally preferred chatting with artists rather than salespeople. While many of Santa Fe’s notable galleries are located in this area, the city boasts more than 250 galleries in a two square mile radius. If you are looking to purchase a particular item, it’s wise to plan ahead.

Most art museums ask patrons not to touch displays. At Meow Wolf, the experience is enhanced by interacting with an assortment of everyday objects set in dozens of rooms with audiovisual enhancements. I will never forget walking into a full-sized refrigerator which led into another room and later squatting down before crawling into a fireplace. Over 100 artists collaborated to repurpose an aging bowling alley into this one-of-a-kind creative endeavor filled with secrets waiting to be uncovered.

With hundreds of restaurants to choose from, we relied on local contacts for suggestions. For innovative southwestern cuisine, we tasted entrees at Palomo, while family-style Mexican food was enjoyed at Tortilla Flats. Kakawa Chocolate House shares its Aztec, Mayan, and European inspired chocolate elixirs to anyone who wants to indulge. Yes, it is worth the splurge. In Santa Fe, we were also introduced to our first flight of hard kombucha at the Honeymoon Brewery.

Taos is often associated with Native American culture, art, skiing, and its spectacular location at the foothills of the Sangre de Cristo Mountains. If our visit had coincided with winter, we would have skied. Instead, moderate autumn weather offered a perfect day to explore the Taos Pueblo, the oldest continuously inhabited Native American community and a couple of art museums.

While it is possible to take a self-guided tour of the Taos Pueblo, both a World Heritage Site by UNESCO and a National Historic Landmark, we joined a group tour led by a college student. Our knowledgeable and personable guide focused on the Taos Pueblo’s history and what it was like growing up in the community. To this day, a small number of indigenous people remain inside the walled area living without electricity and indoor plumbing.

At the beginning of the 20th century, the Taos Society of Artists was formed by Bert Phillips, Ernest Blumenschein, Oscar Berninghaus, Joseph Sharp, E. Irving Couse, and Herbert Dunton. This artist colony lasted until 1927. Nearly a century later, the region remains a magnet for artists. Numerous museums highlight various aspects of the town’s history. At the Couse-Sharpe Historic Site, we stepped into the shoes of E. Irving Couse and Joseph Sharp by learning their perspective on Native American art. While previously unfamiliar with Nicholai Fechin (1881-1955), a notable Russian born artist, we were exposed to his brilliance at the Fechin House.

We took a midday break at El Gamal, the only restaurant in downtown Taos to offer an exclusively vegetarian menu. El Gamal’s falafel was on par with the falafel we’ve tasted in Israel. Locals recommended Lambert’s of Taos for dinner. Without a reservation, we took a chance at finding a place at the upstairs bar. Even though we didn’t have the comfort of a table, the meal surpassed our expectations. We especially enjoyed one of the evening’s creative specials— ruby red trout served with a small portion of orzo made with apricots, olives, and sundried tomatoes along with some arugula garnished with watermelon and fennel and a dab of lemon caper aioli. 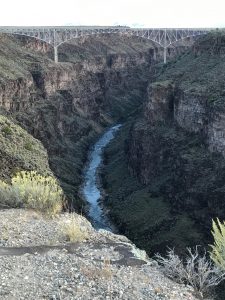 Knowing that we had a five-hour drive back to Denver, we planned a pre-breakfast hike at the Rio Grande Gorge Bridge National Monument. We followed the path running along the 800-foot gorge, revealing layers of volcanic basalt flows and ash, for several miles. An invigorating early morning hike minimized the inevitable stiffness associated with sitting for an extended time.

In less than a week, we were able to experience a small segment of the Southwest. We returned home with a better understanding of how the region developed, an appreciation for local cuisine and art, plus our desire to continue exploring the world. What we learn during our frequent travels complements and enriches our everyday life in Colorado.

Traveling grandmom, Sandy Bornstein, is an award-winning freelance travel & lifestyle writer, She is the author of May This Be the Best Year of Your Life. Learn more about Sandy here and here.

Disclosure: Santa Fe hosted her 3-day stay. The Waite Company arranged for her Taos visit. The Zapata Ranch in Mosca, Colorado provided a complimentary one-night stay. All of the opinions expressed in this story are based on the author’s experiences.

Travel the road with more from Sandy here