Spanish Flu: A Story Of One Family’s Resilience

My mother was 8 when the Spanish Flu epidemic hit and the story she told was one of pride in her family’s ingenuity and resilience and the help from others in the community.  So it translated for her into a source of strength and hope.

That was also the time of WWI and my grandfather was a railroad mechanic in Alabama.  He was conscripted into the army and sent to Bremerton WA to work as a boilermaker at the shipyards.  When he, my grandmother, and my 8-year-old mom arrived, there was no housing to be had.  One community member, Hattie, offered her yard for someone to tent in and that’s where they landed.

As my mom saw it, while neighbors up and down the street passed away in their beds, their family stayed healthy by living in a tent in the fresh air. Hattie became a second mother to her and their lifelong relationship was one of great love and respect.

My mom would never ‘sweat the small stuff’ which I think came partly from this experience too.

Linda Hoskins is a very proud grandmom who makes her home in Minnesota.

The Open-Air Treatment of the Flu – PANDEMIC INFLUENZA 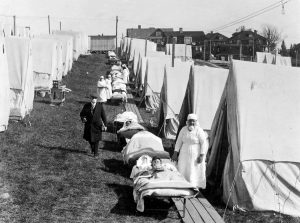 The H1N1 “Spanish flu” outbreak of 1918–1919 was the most devastating pandemic on record, killing between 50 million and 100 million people. Should the next influenza pandemic prove equally virulent, there could be more than 300 million deaths globally. The conventional view is that little could have been done to prevent the H1N1 virus from spreading or to treat those infected; however, there is evidence to the contrary. Records from an “open-air” hospital in Boston, Massachusetts, suggest that some patients and staff were spared the worst of the outbreak. A combination of fresh air, sunlight, scrupulous standards of hygiene, and reusable face masks appear to have substantially reduced deaths among some patients and infections among medical staff. We argue that temporary hospitals should be a priority in emergency planning. Equally, other measures adopted during the 1918 pandemic merit more attention than they currently receive.

By the time of the 1918–1919 pandemic, it was common practice to put the sick outside in tents or in specially designed open wards. Among the first advocates of what was later to become known as the “open-air method” was the English physician John Coakley Lettsom (1744–1815), who exposed children suffering from tuberculosis to sea air and sunshine at the Royal Sea Bathing Hospital in Kent, England, in 1791.20,21 Lettsom’s enthusiasm for fresh air attracted little support at the time, and the next doctor to recommend it met with fierce opposition. George Bodington (1799–1882) was the proprietor of the first institution that could be described as a tuberculosis sanatorium, at Sutton Coldfield near Birmingham, England. He treated pulmonary tuberculosis with a combination of fresh air, gentle exercise in the open, a nutritious, varied diet, and a minimum of medicines. READ MORE HERE