What Do Elders Stand For?

There comes a time in everyone’s life when we are called upon to stand up for what we believe.

ELDERS STAND IN SUPPORT OF SAFE AND FAIR ELECTIONS

Baby boomers across the country are returning to their activism in earnest these days, but instead of marching in the streets, quarantine concerns have them gathering and working online. One of the groups at the spearhead of this movement is the Elders Action Network (EAN), a national non-profit that’s waging an “Elders Stand for Fair Elections” campaign. “We’re calling our local and national representatives to demand they make mail-in voting and early voting more accessible,” says Maxine Lobel, a leader of EAN’s Florida fair elections campaign. She says they’re also contacting individuals, senior centers, interdenominational religious groups, and “any older voters we can identify, especially in underserved communities,” to inform them of their state’s voting rules.

“Our members are eager to learn, and we’re getting new volunteers joining in every day.”

“There are so many problems already with traditional voting protocols, from faulty machines to voter suppression tactics, that adding Covid-19 into the mix makes this an especially urgent issue,” says Paul Dryfoos, a leader of the national group. “Voters in general, and especially older voters, aren’t going to feel safe going to the polls. And we’re going to see even longer lines because there are going to be fewer volunteers willing to risk their health in staffing the polls.”

While many of this group’s members are relatively new to virtual technologies, Dryfoos says they’re facing the challenge head-on because this issue is so important to them. “We don’t have a very big window of time here, so we’re holding online training sessions to get our members up to speed quickly, and the reaction has been overwhelming,” he says. “Our members are eager to learn, and we’re getting new volunteers joining in every day.” 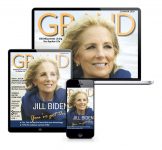 IF YOU ARE ENJOYING THIS ARTICLE. GET MORE GRAND HERE

Founded in 2014, Elders Action Network (EAN) began as a grassroots movement to address the social and environmental crises of our time. It now has over 10,000 members, working in state chapters to affect local change, as well as working with other groups, such as the League of Women Voters, the ACLU, interdenominational religious groups, and young people’s groups, including the Sunrise Movement. 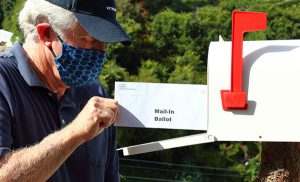 “We can no longer stand by the sidelines; we have to be able to say to our grandchildren that we were part of the solution,” says EAN co-founder John Sorensen. “Not only do we have a sense of wanting to leave a legacy of engagement, but this work is fulfilling in and of itself. There’s an enthusiasm that is contagious. We’re continuing to look for ways we can be of service, all revolving around the idea that elders have a lifetime of experience, talent, and resources to work with, as well as time to contribute. We’re attracting people who have a passion for life and a yearning to give back, and fortunately, there are a lot of us, and we’re just getting started!”

For more information on their work, or on how to get involved please go to eldersaction.org/fair-elections

Read more in GRAND about protecting the environment