Posted on October 8, 2020 by Christine Crosby in

My favorite uncle and I sat in the hot backseat of the old black Buick.

Mom and dad had gone inside a large stone building to do some big important signing of something to do with the farm. So, Uncle Joe and I sat and waited with the windows cranked open to let in a bit of the hot breeze. His fedora lay on the dash behind him and a rivulet of sweat crept down his sideburns.

Our compatible silence broke now and then when someone passed on the sidewalk in front of where we were parked. We watched them go by and gave a review as if we’d just watched a movie. Uncle Joe was a master of people watcher. It was fascinating. He could entertain me for hours on the fodder provided by the parade of men, women, and children walking past.

An old man slowly approached the car. He moved almost without picking up his feet. He was older than my uncle, who had lived a long time in his blue OshKosh B’Gosh overalls paired with the dapper hat. The man tilted a little left where a cane held him upright like a third leg. From where I sat, it didn’t look like it would take much to topple him.

I stole a sideways glance at my uncle. He stared ahead. I searched for the kind of spinning look I loved so much, the kind that revealed his thoughts. Uncle Joe’s expressions were as if his skin was translucent and just underneath if you looked for a while, his face was as easy to read as a book.  Lined and tan from years of hard farm work he could make me laugh till my sides ached. He could make his eyebrows dance and his chin quiver. His eyes grew round like pancakes and his mouth puckered.

I waited. He was thinking all right, words like a scroll ran under his eyelids, but they didn’t show on his face in the clever way I anticipated. Uncle Joe just stared ahead with a sad look I couldn’t quite read. 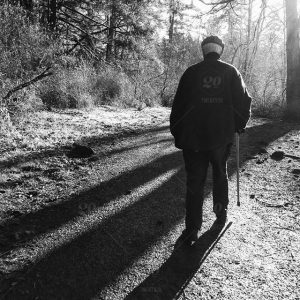 As the man shuffled to the center of our vision a loud pop made me jump. I swiveled my neck to look out the open window, but the backfiring car had turned into another street. As I settled again, the old man was in the process of a slow turn. Dragging his feet in tiny paces he moved a half-circle. His body came to a stop when he faced the opposite direction he’d been heading. He stood there a while, leaning on his cane, observing, looking in each direction, then laboriously began his slow rotating trek back 180 degrees to face the direction he’d been going originally. The car and its loud noise had long disappeared, replaced with new honks and squeals.

Deliberately he moved forward one small step at a time.

“You can tell when a person is getting old by the way he turns around to find out what happened,” Uncle Joe said softly.

I’ve thought of my uncle’s observation often. His voice, the one full of melancholy that day, the same that could make me double up in laughter, whispers as I watch other elderly people stop, turn, and look behind them. I heard it one day as I waited for Uncle Joe himself to turn his entire body to pause and listen as I walked beside him. I wondered if he remembered what he’d said that day in the car. I wondered if he knew when he himself had crossed the line.

I heard his words in my ear today as I found myself stopping to gain balance before I turned to see the birds cawing above and behind me.

Where a simple swivel of the neck and continuing stride once sufficed, now I need to pause and turn to keep a dizzying twirl from shaking me off my feet.

No doubt Uncle Joe saw himself in that old man, as I do when I contemplate others whose years outnumber mine. I suppose there is some deep truth hidden in his words, “You can tell when a person is getting old by the way he turns around to find out what happened.”  I certainly don’t want to spend my senior years just looking back, but perhaps Uncle Joe’s unintended meaning actually keeps me looking ahead.

That old man we watched on the sidewalk showed me that no age holds the expiration date to curiosity.

Perhaps Uncle Joe’s sadness had just as much to do with the tender realization of how much determination is required to maintain a sense of curiosity in a body resisting the effort. Curiosity is a young trait. It makes for danger and adventure, knowledge, and growth. The desire to know, understand and dig for answers fades without a certain commitment and stubbornness.

As I age, I resolve to care more about what is around me than the amount of effort it takes to discover it. May I nurture the desire to know, learn, and take the time to figure things out long past the need to do so. I want to put around me now those people and possibilities that will encourage questions that need answers even if the body is slow.

Uncle Joe, with his people-watching and his spinning thoughts, reminds me how I want to approach the years ahead. My grandchildren confirm it. May I grow old like the youngest among us who find inspiration to stop and listen, to bend over a flower, and wander off the path. 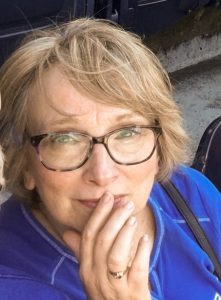 Sylvia Schroeder serves as Women’s Care Coordinator at Avant Ministries. Mom to four, grandma to 14, and wife to her one and only love, she enjoys writing about all of them. Find her blog at When the House is Quiet. Like her Facebook page or follow her on twitter.