Grandmom Gives Birth To Her Own Granddaughter

Grandmom Gives Birth To Her Own Granddaughter
Just when you think you’ll do anything for your children, along comes an opportunity that most grand would not be able and or willing to ever do.
According to Insider, an Illinois grandmom has given birth to her own granddaughter after offering to be her daughter’s surrogate. Julie Loving, 51, delivered a baby girl named Briar in an Illinois hospital on Nov. 2, as her daughter Breanna Lockwood, stood by her side. Breanna Lockwood and her husband, Aaron, are the baby girl’s biological parents. After trying to conceive on her own through IVF for nearly two years and suffering miscarriages, Breanna, 29, and Aaron began to consider surrogacy.
Learn more about this amazing grandmom here.
This is not the first time that a grandmom stepped up to be a surrogate. In 2008 a Michigan grandmom gave birth to her twin grandchildren.
The following is from the GRAND Magazine cover story of Crystal Sirignano

This article is based on Christine Crosby’s interview with Crystal Sirignano. 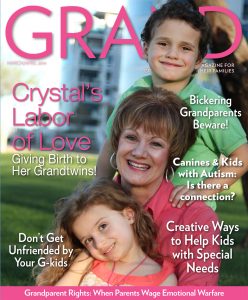 Crystal Sirignano’s incredible journey began when she and her husband DJ’s only daughter, Kendra, finally accepted that she would not be able to carry a baby to term. Kendra and her husband, Aaron, had suffered multiple unsuccessful attempts to sustain a pregnancy, including three failed IVFs costing more than $20,000 each, and a lot of heartaches.

“Watching my daughter go from a really independent, happy girl to being severely depressed was unbearable,” says grandmom, Crystal.

Kendra’s fertility specialist suggested a gestational carrier, using Kendra and Aaron’s fertilized embryo. But they had run out of money and didn’t have anyone else to turn to. That’s when Crystal approached a fertility doctor in Michigan to inquire whether she (and her uterus) might be healthy enough, at 51, to carry her daughter’s embryo(s) to term. 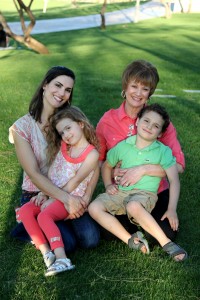 “My husband was in the room when the doctor told me I ‘had the uterus of a fifteen-year-old.’ My husband also knew I would do whatever I could to help our daughter, so he was on-board immediately.”Convincing her daughter was not as easy. “Kendra thought it was too dangerous, but I begged her to let me try.”

Crystal flew from her home in Michigan to Arizona to meet with her daughter’s fertility specialist. After the doctors confirmed that Crystal had a good chance of successfully carrying and delivering a healthy baby, Kendra and Aaron agreed to giving it try.

Despite having given birth to two healthy children in her early twenties, this grandmom harbored some concerns. “I felt even more nervous because it was my daughter’s last chance. That made me even more careful than I’d been with my children because these were not my babies.”

Crystal and DJ now have another granddaughter, Nyah (19 months), by their son and his wife. They also have a 20-year-old granddaughter, Claire, whom Kendra and Aaron adopted at age 12.

IF YOU ARE ENJOYING THIS ARTICLE, CLICK HERE TO GET GRAND MAGAZINE FREE!

They all call Crystal “Nona” (“we’re Italian”). Like all grandmothers, Crystal would love to spend more time with each of her four grandkids. Because her son’s family lives nearby in Michigan, she takes care of Nyah three days a week. She visits the twins and Claire in Arizona often.

The twins know the unusual role their Nona played in their birth. “Nico and Mia’s parents have always been honest with them. When someone would ask them where they came from, they would tell them that they grew in their Nona’s tummy. When they were younger, they thought for a while that I was giving birth to all babies, even the neighbor’s.

“And when Mia was about three, I once told her that she was an angel from heaven, and she said ‘No, I came from the freezer,’ explaining that ‘Mommy and Daddy put my egg in the freezer, and then into your tummy.’”

Now, she reports, “They understand as well as five-year-olds can understand.”

Crystal wrote her memoir Labor of Love in hopes of inspiring women who suffer from infertility to never give up—and to explore all avenues.