The Sunday School Of Grandma And Grandpa

The Sunday School of Grandma and Grandpa

When our younger daughter saw that Sunday school was not going to reopen due to the Coronavirus, she asked her father and me if we would take over her boys’ religious education. We just looked at each other blankly and, frankly, a little panic-stricken. Neither of us is a teacher, a Zoom expert, or deeply knowledgeable about our religion. However, we relished the idea of having a more meaningful interaction with the boys than our usual riff on:

And that old standby, “Grandpa and I took a walk yesterday and saw a chipmunk.”

After agreeing to do it, we quickly realized there were a few obstacles to overcome before we could say, “Class is in session.” First of all, the boys are three years apart and what interests an 11-year-old would probably go over the head of an 8-year-old. Second, there’s a 3-hour time difference between our home and theirs, so we had to schedule around that. Third, the boys are loaded with activities to make the time pass in lockdown, so the only hour and that worked for them was 7:30 at night, not the best after their long and busy day. Also, pedagogically speaking, Zoom has its limitations. We knew that videos would hold the boys’ attention, but they translated poorly onto their small computer screen. “Share screen” was also a learning experience—for us. (Even our younger grandson could do it in his sleep.)

Nevertheless, we plunged in. We decided on a few things that, since they worked out well, I pass along here. We would:

Being Jewish and having grandchildren who are being brought up Jewish, we focused on the Old Testament, but the basic approach is the same whether you are Protestant, Catholic, Muslim, Buddhist or Hindu. 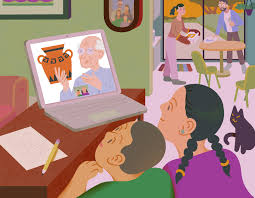 I think you have to start with the premise that your grandchildren do not have basic cultural literacy. Kids in our generation, even if they came from completely secular homes, somehow knew their Bible stories, knew what references to them meant, and could recognize the main Biblical characters depicted in art, music, and literature. It was in the air we breathed. This doesn’t seem to be the case today, so you’ve got to begin at the beginning, focus on the Bible’s Greatest Hits, take nothing for granted, and keep it pretty basic. There’s no harm in going over familiar territory, either. Chances are your grandchildren do know about Noah’s Ark, but you can fill in with why God was angry with the peoples of the earth and why Noah alone was chosen to survive. Going from what the kids know to what they don’t know seems to work well for us.

Gee whiz travelogues seem to go over well, too. For example, we showed them the Dead Sea, the lowest place on earth, with bathers bobbing along on its salty waters and the “diamonds” and “pearls” that water formed along its shore. A video on the high fortress of Masada, where Jewish rebels jumped to their death rather than be captured by the Roman conquerors, was also a big hit. We have done more than one session on ever-fascinating Jerusalem, so central to the Jewish, Muslim, and Christian faiths.

We’re only a couple of months into the Sunday School of Grandma and Grandpa, but we’re already seeing the benefits.

We start off each lesson with one-syllable Hebrew words, which we try to incorporate into short sentences afterward. I’m under no illusion we’re turning out bi-lingual scholars, but it’s kind of cool to have a few words that are like our secret code. Next up will be a discussion of Jewish holidays as they occur.

Since our grandchildren are African-American, we look for visuals they can especially relate to, such as the ancient tale of Solomon and the Queen of Sheba. Their son, Menelik I, founded an Ethiopian dynasty that lasted for almost three thousand years. After discussing that ancient story, we showed the boys a video of the modern-day airlift of thousands of Ethiopian Jews to Israel.

We’re only a couple of months into the Sunday School of Grandma and Grandpa, but we’re already seeing the benefits. We’re learning a lot and we think the kids are, too. Just as important, or even more so, we feel closer to our grandsons, and our social time after the lesson has become more animated and intimate. Why not speak to their parents to see if they vibe to the idea of your doing something similar? It’s wonderful to see religion through bright, fresh eyes. Perhaps we’ll even be able to go to the Holy Land with them someday. Now that will be an experience none of us will ever forget!

Read more about grandparents and school for grandchildren

ABOUT THE AUTHOR – BARBARA GREENLEAF

Barbara Greenleaf has chronicled the changing family for decades, starting with Children Through the Ages: A History of Childhood, Help: A Handbook for Working Mothers with Louis Schaffer, M.D., and, most recently, Parents of Adult Children: You Are Not Alone. A graduate of Vassar College, formerly contributing editor at Working Mother, and onetime staffer at The New York Times, Barbara is called “Grandma” by four grandchildren. Visit her at www.BarbaraGreenleaf.com. 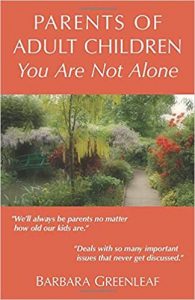