This Martin Luther King Jr. Day we remember the life of a minister and leader who saw the best in all people. Dr. King spoke about the need for us to “love your enemies” and to “bless them that curse you.” In the face of threats of violence against his own family, he preached nonviolence and called for “a time for reconciliation.” He said: “This is the time to build the beloved community.”

Our nation has been ripped apart by violence and grossly irresponsible and dangerous political leadership. If ever there was a time to go back and read Dr. King’s great writings or listen to his stirring speeches, it is today. The attack on our nation’s Capitol two weeks ago was one of the darkest and disgraceful days in our nation’s history. The insurrectionists led by our President and his political allies stormed the building with confederate flags. They desecrated our most important democratic institution, killing and terrorizing our leaders. The threat of violence continues this week. Yesterday, our state Capitol in Tallahassee was on lockdown, and the Governor has called in the National Guard.

“…we cannot “satisfy our thirst for freedom by drinking from the cup of bitterness and hatred.”

During the attack, I thought of my grandfather, Dante Fascell, who served our state and nation as a member of the United States House of Representatives from Florida for 38 years. I remember visiting his office in Washington, D.C. as a young student with my social studies class, and touring through Statutory Hall with him. While I don’t remember the detail of every story he told me, I do remember how much he believed in our American democracy –how we have the ability through our freedoms to work through our differences and make progress for all Americans.

Many of you have reached out to me since these attacks and asked what can we do? We must rededicate ourselves to the truth in public life. We must hold those political leaders accountable who use lies and fear as their political weapons. We must return to electing leaders who believe in and treasure our democratic institutions. And we should reread the writing of Dr. King, who when he marched on Washington in 1963 said that we cannot “satisfy our thirst for freedom by drinking from the cup of bitterness and hatred.”

Thank you for the privilege of serving you. 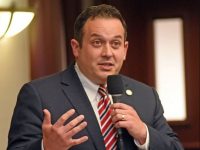 Benjamin Frank “Ben” Diamond is a Democratic member of the Florida House of Representatives, representing the 68th District, which includes most of the city of St. Petersburg, Florida, Pinellas County. Wikipedia

To read more in GRAND about Martin Luther King

IF YOU ARE ENJOYING THIS ARTICLE, GET GRAND HERE