The current trajectory of Covid-19 cases and vaccinations implies that the global pandemic could be as good as over in just a couple of months, a team of J.P. Morgan analysts that includes the global head of quantitative and derivatives strategy Marko Kolanovic said on Friday. That’s a much faster timeline than the market and most economists are working with.
The J.P. Morgan analysts aren’t concerned about the potentially more contagious U.K. coronavirus variant, referred to as B.1.1.7., which has been discovered in dozens of countries and more than 30 U.S. states. Last month, the Centers for Disease Control and Prevention warned that the U.K. variant could become the dominant strain in the U.S. by March.

“The spread of the B.1.1.7. variant is not inconsistent with an overall decline of Covid and an end of the pandemic in Q2 due to vaccination, natural immunity, seasonality, and other factors,” Kolanovic wrote on Friday. “…While the dataset is still small, statistical analysis of current vaccination data is consistent with a strong decline (i.e. effective end) of the pandemic within ~40-70 days.”

That range means somewhere between the end of March and the end of April—in other words, just around the corner. 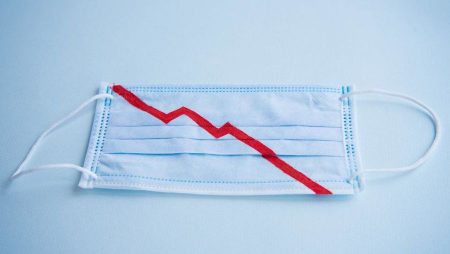 The J.P. Morgan quants analyzed the impact of vaccination rollouts on Covid-19 cases and the rate of spread in areas where the U.K. variant was and was not widely circulating. They found that the post-holiday spike in cases in both the U.S. and the U.K. were “almost identical,” despite the U.K. variant not being detected in the U.S. yet.

They also noted that cases in Denmark during the same period rose even faster than in the U.K. and the U.S. And since then, cases in Denmark have been declining more quickly despite the U.K. variant becoming more prevalent in the country at the same time. Likewise, new coronavirus cases in Florida and California have come off their January peak faster than the national average, despite those two states having a higher rate of U.K. variant cases than the U.S. overall.

“This is another example that an increase of B.1.1.7. prevalence can be consistent with a decline in overall cases (e.g., due to seasonality, vaccination, or natural immunity),” Kolanovic wrote.

Just using those two figures and assuming that the current pace of vaccinations remains constant—and that social distancing and other preventive measures remain in place—gets the quants to their 40-to-70-day estimate.

The team’s analysis comes with a disclaimer: The calculation assumes no hiccups with the rollout or supply of vaccines and ignores regional differences in geography, demographics, and the uneven distribution of vaccines. But the current round of vaccinations targets the lowest-hanging fruit: People over 65 have accounted for about half of hospitalizations and some 85% of deaths since the pandemic began. Vaccinating that group will likely have a much larger incremental impact on beating back Covid-19 than the next group of younger and less susceptible people.

The pandemic’s economic damage will likely long outlast the end of rapid community spread. But, unsurprisingly, the J.P. Morgan analysts’ calculations have them bullish on the companies and assets most sensitive to a post-pandemic recovery. They advise using any near-term pessimism as an opportunity to buy the dip.

“Any weakness in reflation and cyclical assets should be used as an opportunity to increase exposure to the reopening theme, in our view,” Kolanovic wrote.

An effective end to the Covid-19 pandemic before the summer is not the consensus view on Wall Street, and a lot could still go wrong. But given current trends, the math works.