Are we in the endgame now?

According to this article on Vox.com

The Covid-19 pandemic in the United States has decelerated from its winter peak. On January 8, the country saw more than 300,000 new cases — a single-day record. Also on January 8, the US peaked at nearly 250,000 cases a day based on a weekly rolling average, according to Our World in Data.

As of February 24, the US is averaging a little more than 68,000 new Covid-19 cases every day. Hospitalizations have also decreased (to about 54,000 patients currently hospitalized, down from a peak of 130,000 in mid-January), as have deaths.

The improvement in the pandemic is significant. It’s likely attributable to a combination of people staying home after the winter holidays and more Americans gaining protection against future infection (whether through infection or vaccination).

The big question now is whether we’re seeing the beginning of the end. As more people are vaccinated, will this downward trajectory continue, or even accelerate? Or will case numbers start to level off and stay high (relative to most of 2020) for months?

To continue reading the article from Vox.com 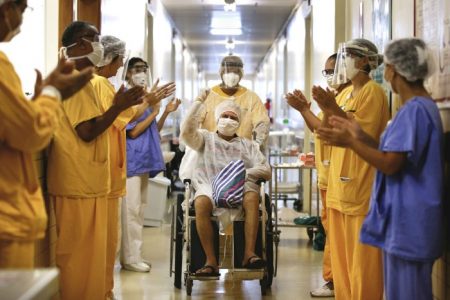 According to the New York Times: In recent days, coronavirus cases have been dropping steadily across the United States, with hospitalizations falling in concert. But health officials are growing increasingly concerned that quickly circulating variants of the virus could cause new surges of cases faster than the country is managing to distribute Covid-19 vaccines.

Public health experts likened the situation to a race between vaccination and the virus’s new variants — and the winner will determine whether the United States is approaching a turning point in its battle against the coronavirus, now entering a second year.

“We’re definitely on a downward slope, but I’m worried that the new variants will throw us a curveball in late February or March,” said Caitlin M. Rivers, an epidemiologist at the Johns Hopkins Bloomberg School of Public Health.

Nationwide, new coronavirus cases have fallen 21 percent in the last two weeks, according to a New York Times database, and some experts have suggested this could mark the start of a shifting course after nearly four months of ever-worsening case totals.

This week, the University of Washington’s Institute for Health Metrics and Evaluation, which puts out a predictive model that is widely used for planning, including by some government agencies, released a projection saying new cases in the United States would decline steadily from now on.  Continue Reading