The esteemed three-term Florida U.S. Senator who was twice elected Governor was as grandfatherly a leader who ever walked our state.

Born in the Great Depression’s first year of 1930, the Lakeland native, son of a railroad conductor, became our most beloved public servants.

Lawton Chiles took on conventional politics by limiting campaign contributions to $10 per person (later raised to $100 in his 1990 gubernatorial run) as a symbol of his aversion to being considered bought by special interests to the detriment of “regular working folks”.

It was not just traditional partisan politics that he scorned but his policy agenda staked new ground in advocating for the prevention of problems before they became too expensive to afford a fix. “Investing in success is a lot smarter and cheaper than paying for failure” was one of his major themes.

His advocacy of prenatal and infant health care sparked the creation of the Healthy Start network of community-based coalitions resulting in a significant reduction in infant mortality. For more information about Governor Chiles’ signature achievement visit the Florida Association of Healthy Start Coalitions.

His abhorrence of the pervasive marketing of tobacco to teenagers led to the successful Truth Campaign taking to task the shameful flood of cigarette advertising aimed at youth.

In addition, he assembled a Dream Team of attorneys to sue the tobacco industry and reclaim the costs of the diseases caused by smoking.

Yet one additional priority of our Grandfather Governor was to create a greater emphasis of the importance of the younger years of a child’s educational future.

While Governor Chiles died suddenly at age 68 just weeks before completing his second term in December 1998, many of the seeds of success he caused to be sown have proven to be fruitful for two-plus decades since his passing and doubtlessly will have an impact for decades to come.

My retelling of the history of Lawton Chiles is motivated by my conviction that a wise leader who understands core values, eschews big-money political influence, and possesses the conviction to carry a reform agenda that invests resources wisely is timeless and now more than ever, timely.

It is the voices of our wise elders who can make a powerful difference in the lives of our children. We need to focus the attention and action of my fellow grandparents representing the diversity of gender, ethnicity, race, economic class, and political leanings to unite in the cause of advocacy for a new generation of healthy, educated, and productive youth. 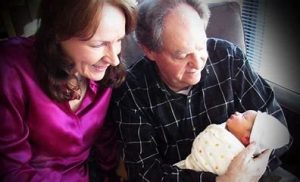 Jack with his wife, Charlotte, gazing at their first grandchild.