CAROLE KING: The Tapestry of Her Amazing Life

CAROLE KING: The Tapestry of Her Amazing Life

Carole King is a legend, but not the oh-so-glamorous mink coat type. The beloved, multi-award-winning singer-songwriter is as relaxed, homey, and open-hearted as the famous picture on the 1971 cover of her classic album Tapestry. In it, she’s sitting on a window seat shaded by Indian-print curtains, wearing old jeans and a sweater. Her feet are bare, her long curly hair falls over her shoulders. Her chubby cat Telemachus perches on a cushion in the foreground. And this young Earth Mother is doing needlepoint. Off cameras are her two young daughters and the black Baldwin spinet piano on which she composed dozens of hit songs. 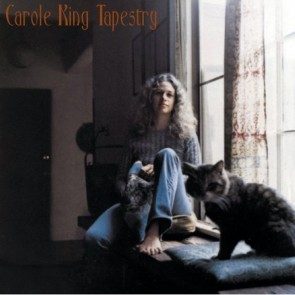 Fifty years later, Tapestry is recognized as one of the greatest albums of all time (#25 out of 500, on Rolling Stone’s 2020 list), recipient of four Grammys—including Album of the Year and Song of the Year (“You’ve Got a Friend”)—she was the first woman ever to win that award.

Tapestry is justly celebrated as “the soundtrack of our lives.” Many of us who grew up between the ‘50s    and the ‘70s understand at a deep level what her songs are about—the experiences of love, friendship, family, separation, uprootedness, and trying to find acceptance for who we are. Tapestry brings together the threads of many colors Carole King has woven into a full and rich life.

Today, King’s auburn ringlets are a cascade of silver. She is the grandmother of five. 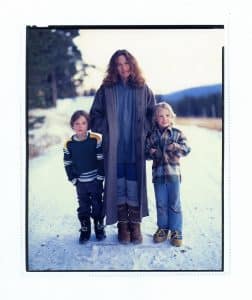 The two little girls, King’s daughters with her first husband and songwriting partner Gerry Goffin—Louise and Sherry Goffin—have grown children of their own. King’s two other children, Molly and Levi Larkey were born from her second marriage to musician Charlie Larkey.

Whether through nature or nurture, many of King’s progeny have followed her into the arts. Louise Goffin has a notable career as a singer-songwriter, and Sherry Goffin Kondor is a musician and producer. Molly Larkey is an artist.

As for the grandchildren, Dillon is a guitarist and singer, while Sophie is a business major (King jokes that Sophie’s experience of touring in utero with her mother “contributed to her decision early in life not to become a professional musician”). Louise’s two sons, Elijah and Hayden Wells are both musicians.

The Story of a Shy but Determined Girl

Given her phenomenal success, it’s hard to believe that King was once so shy about her singing voice that James Taylor had to literally push her to the mic at his college concert tour in 1970.

The granddaughter of Jewish immigrants from Poland, King was born Carol Joan Klein in 1942 to a firefighter and his wife in Brooklyn. Her mother, Eugenia, played piano and started teaching Carole at age 4. She proved to be a prodigy. At 15 she was already writing songs like the pop music she heard on the radio—and had even landed a contract at ABC Paramount Records. At 16 Carole enrolled at Queens College where she met a dark-haired 19-year-old named Gerry Goffin. They married when Carole got pregnant at 17. With Carole composing the music and Gerry writing the lyrics, an astonishingly prolific songwriting duo was born.

Married at 17, two babies by the age of 20? You’d think that King’s musical career would have faded into domesticity. But King was always driven to succeed. She and Goffin were soon under contract to Aldon Records (not in the Brill Building, but close enough), where they competed with other talented songwriters in adjoining cubicles to create hits. Their breakthrough came when the Shirelles recorded their song “Will You Love Me Tomorrow?” The single shot to the top of the charts in 1960 and stayed there. The pair’s song “The Loco-Motion” jumpstarted the career of Little Eva, who was their babysitter (which left the Goffins looking for a new babysitter, hopefully, as Carole wrote, “one without a good singing voice”).

From 1959 to 1968 the team of Goffin and King wrote more than two dozen rock ‘n roll hits for other artists, many of which have become standards (see sidebar, “Which Hits Do You Remember?”). One of their most exciting moments, described in King’s memoir, was when they were asked to write a song for Aretha Franklin—which they did literally overnight. It was “A Natural Woman.”

But the strain of marrying and having kids so young, forging demanding careers, and the decision to leave New York City for the suburbs of West Orange, NJ (the subject of their song “Pleasant Valley Sunday”), took their toll. Goffin departed for Los Angeles. King followed with the children, but the couple divorced in 1968. Goffin’s mental health issues and drug use were a factor.

In L.A. King found a new songwriting partner, Toni Stern, and felt empowered once again to write lyrics on her own. L.A. had its own exciting music scene. The Tapestry photo was taken in King’s small house on Wonderland Avenue in Laurel Canyon, and she socialized with the Beach Boys, the Eagles, Dave Crosby, and Joni Mitchell. She reconnected with her New York friend James Taylor, and they performed on each other’s albums, including Tapestry and Sweet Baby James. In fact, Taylor’s version of “You’ve Got a Friend” gave him a number one hit the year that Tapestry came out.

Taylor and King have remained close. They had a great impact on one another, Taylor told The Guardian recently. “Our extended musical conversation…was really something wonderful. Carole and I found we spoke the same language…as if we shared a common ear, a parallel musical/emotional path. And we brought this out in one another. To me, she was a port in the storm, a good and serious person with an astonishing gift, and, of course, a friend.”

Seven of the dozen songs on Tapestry were written entirely by King. “Singer-songwriter” was a new term then, and Carole was one of the first people to be included in that genre.

As phenomenally gifted as she was in music, King had a much harder time with relationships. She was married three more times after her breakup with Goffin—to musician Charlie Larkey, with whom she had her two younger children; then to songwriter Rick Evers, who physically abused her and died of a drug overdose after a year of marriage; and finally to Rick Sorensen, known as Teepee Rick, who was not a musician. He disliked L.A. and resented the touring and separations that Carole’s successful career required.

Although her marriage to the first Rick was a difficult and tragic one, he did introduce her to the place she called home for 30 years—Idaho—which led her to become a committed environmental activist. Since the 1990s she has put time and energy into passing the Northern Rockies Ecosystem Protection Act (NREPA) to protect federal lands in Idaho, Montana, Oregon, Washington, and Wyoming.

In recent years, King seems to be everywhere. In 2007 she and James Taylor reprised their legendary 1970 gig at the Troubadour in San Francisco, which gave rise to a PBS special. She was honored as the 2014 MusiCares Person of the Year, where an array of superstar guests, like Lady Gaga and Alicia Keys, performed covers of her songs. She has joined in dozens of fundraisers for good causes. 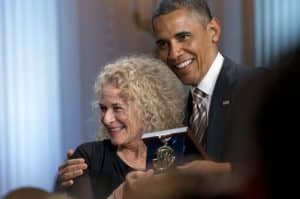 In 2015 she won Kennedy Center Honors bestowed by President Obama—and at the emotional ceremony Aretha Franklin reprised her magnificent version of “A Natural Woman.”

An ardent Democrat, she performed at the Democratic National Conventions in 2016 and 2020.  And this year she’s up for the Rock ‘n Roll Hall of Fame as a solo artist. She and former husband Gerry Goffin were inaugurated as a duo in 1990.  [Fan Vote 2021 (rockhall.com)] 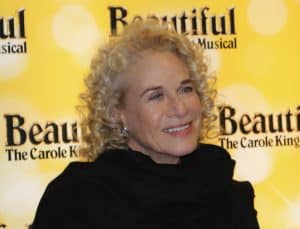 The hit musical, “Beautiful,” based on her life and music, was a must-see on Broadway and in London. The Broadway production ran for six years and won two Tony Awards, but closed recently during the pandemic. Although King gave her approval for the production, for several years she couldn’t bring herself to see it. It was too painful. “I lived it,” she said. “I don’t need to see it.” But one night she went to the show incognito and was blown away. Soon after, she surprised the audience by appearing on stage and performing the song “Beautiful.” The crowd was ecstatic. 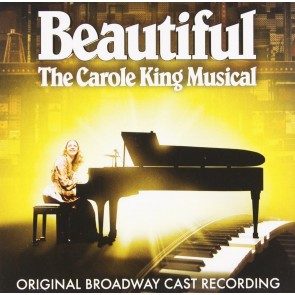 King, despite her many awards and accolades, remains as warm and unpretentious as ever. Her life is an open book as well as a Broadway musical—with the publication of her memoir, A Natural Woman when she turned 70. It’s a fascinating tale of a woman with a dream and an incredible gift whose life has taken dramatic twists and turns.

Why Tapestry Is Relevant Today

For its 50th anniversary, Tapestry is being re-released in vinyl.

What makes Tapestry so important to so many people? Carole’s daughter Louise Goffin explains on www.mariashriver.com: “What it means to people today is multiplied by their memories of who they used to be. Music can be an amazing conduit for remembering,” she writes, adding, “When something is great, it’s relevant no matter what year it is.” Famed producer Peter Asher (who performed with Peter and Gordon in the ‘60s), notes, “I truly believe people will be listening to Tapestry as long as they’re listening to Bach and Mozart. Tapestry is an album that will live forever.”

During the pandemic year when we have all been so physically distanced from each other, songs like “So Far Away” and “You’ve Got a Friend” resonate even more powerfully. Everyone young and old can find solace and joy in this timeless album.

Learn more about Carole King and the 50th Anniversary of Tapestry at www.caroleking.com 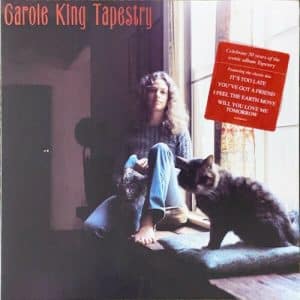 Here’s a special treat for you!

Carole King’s Tapestry…and then some

Enjoy Paul Ingles’ great new two-hour radio documentary about Tapestry, and a conversation with Paul about Carole King and the phenomenon triggered by this album. The two-hour program includes more material exploring King’s remarkable career before and after Tapestry in addition to the close-up, annotated listen to the legendary album itself.

Take the time now or come back to this “must listen to podcast” when you have some time to soak in the magic and music of Carole King.

Remember These? Hits by King and Goffin

In the 1960s, the team of Carole King and Gerry Goffin wrote many hits recorded by other artists. Some might surprise you.

Will You Love Me Tomorrow? – The Shirelles

Keep Your Hands Off My Baby – Little Eva

Up on the Roof – The Drifters

One Fine Day – The Chiffons

Some Kind of Wonderful – The Drifters

It Might as Well Rain Until September – Bobby Vee

I’m Into Something Good – Herman’s Hermits

Wendy Schuman is a former editor with Parents and Beliefnet. Though she is delighted to live near Carole King’s old home in West Orange, NJ, at Pleasant Valley Way, she can assure you it’s not “status symbol land”!

Wendy is the proud grandmom of four.

Wendy and her husband help a new generation of college grads in Millennials in Wonderland. To learn more about Grad Life Choices their pro-bono coaching program, click here: