“All Americans can feel the power of this day, and learn from our history,” Mr. Biden said at a ceremony at the White House, noting that it was the first national holiday established since Martin Luther King’s Birthday in 1983.

He said signing the law was one of the greatest honors he will have as president.

“Throughout history, Juneteenth has been known by many names: Jubilee Day. Freedom Day. Liberation Day. Emancipation Day. And today, a national holiday,” Vice President Kamala Harris said, introducing Mr. Biden. She also signed the legislation in her capacity as the president of the Senate.

Before Juneteenth became an official federal holiday, 94-year-old Opal Lee was on a mission. 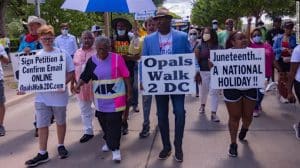 “I’m not just going to sit and rock, you know?” the determined “Grandmother of Juneteenth” told CNN. “The Lord is going to have to catch me.”
Days later, the spirited nonagenarian shouted with delight as she watched Congress pass a bill to make Juneteenth — June 19 — a nationwide holiday commemorating the end of slavery.
“I’ve got so many different feelings all gurgling up here — I don’t know what to call them all,” she told CNN affiliate KTVT in Fort Worth, Texas, where she lives.

Thanks to Afar magazine, below are many opportunities to celebrate Juneteenth across our country.

Black tourism and hospitality experts across the U.S. share the Juneteenth events they’re looking forward to this year.

For many in the United States, the peak of the summer celebratory season is Independence Day. But as more Americans realize the independence gained on July 4 wasn’t equitable, another day of freedom is getting the recognition it deserves: June 19, 1865. Also known as Juneteenth, this is when the last enslaved African Americans in Galveston, Texas, learned they were free–more than two years after the signing of the Emancipation Proclamation.
This Juneteenth, there are events happening throughout the country—from where U.S. slavery began in Virginia to where it ended in Texas—to honor and celebrate freedom for all. AFAR asked Black tourism and hospitality experts across the U.S. for the Juneteenth events they’re looking forward to in 2021. These are their picks.

The first recorded Africans were brought to Jamestown, Virginia, in 1619. “The horrific arrival and the laws that codified slavery were set there,” says Rita McClenney, Virginia Tourism president and CEO. “I want people to know that the Black American experience started in Virginia. When you look at our deep traditions and our neighborhoods, it all started here.”

To commemorate this, the Jamestown Settlement and American Revolution Museum is hosting a 90-minute program of performances, music, and dance honoring the African diaspora on Saturday, June 19, at 2 p.m. Admission to the Commemorate Juneteenth event is included with museum tickets, which must be purchased in advance to reserve a seat.

This is the first year Juneteenth is officially being recognized in New York City. “Celebrations will show up in countless ways, but the goal is always honoring our ancestors and creating a sense of joy that is amplified that day,” says Rondel Holder, senior director of multicultural content at NYC & Company.

One highlight is the “I Dream a Dream That Dreams Back at Me” performance taking place on June 19 at 7 p.m. outdoors at Lincoln Center. Conceived by the award-winning poet Carl Hancock Rux, this immersive celebration will move guests across the Lincoln Center campus where they’ll experience multiple performances ending with a seated concert.

Health is the theme of the 18th annual Sacramento Juneteenth Festival, which takes place outdoors on June 19 from 11 a.m. to 6 p.m. at William Land Park. In addition to local performers, art showcases, and food vendors, the festival will host vaccination sites with public health experts addressing the long-term effects of the pandemic on the Black community.

Continue to the original article