Grandparents raising children for a second time, ‘grandfamilies’ struggle during the pandemic

“Grandparents raising grandchildren frequently experience stress. They are caring for children at a point in their lives when they never expected.” 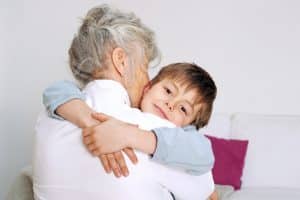 Grandparents raise their grandchildren for a variety of reasons. Most of these reasons reflect difficulties experienced by the grandchild’s parent, which prevents the parents from caring for their children. Specifically, grandparents often raise their grandchildren due to a combination of parental substance abuse, abuse and neglect, unemployment, incarceration, mental or physical illness, teenage pregnancy, and abandonment.

Raising a grandchild affects every aspect of a grandparent’s life. As a result, grandparents raising grandchildren face many challenges: legally, financially, socially, physically, and mentally. The COVID-19 pandemic is not only heightening challenges that these families already face but also forming additional challenges. Another big challenge for grandparents raising grandchildren is the generation gaps that make care difficult when older adults are not current with youth fads, technologically savvy, or knowledgeable about school subjects and teaching methods. Despite pandemic-induced changes in school modalities, GRG remains responsible for ensuring the education of their grandchildren, including overseeing whichever venue is used this school year (in-person, online, hybrid, etc.). Placing greater responsibility on GRG to organize, monitor, and teach grandchildren may be a burden that is too much for grandparents to handle.

Grandparents raising grandchildren frequently experience stress. They are caring for children at a point in their lives when they never expected. In addition, their new role as caregivers isolates them from friends and others their own age.

Many communities offer support groups for grandparents raising grandchildren. Support groups provide participants with an opportunity to talk about their experiences and feelings in a safe, supportive environment. Participants can also gain information about local resources, learn from one another, and meet people dealing with similar issues. Support groups allow time for personal sharing, but also take a positive outlook through structured-sharing time, connecting participants to sources of support, and helping participants set and reach goals. The Harnett County GRasP (Grandparents and Relatives as Parents) is a Family Caregiver Support Program that provides training and information for residents age 55 and older who are raising their grandchildren. The support group meets on the third Tuesday of the month at 11 a.m. at the Harnett County Division on Aging, 309 W. Cornelius Harnett Blvd., Lillington. Resources are available online for grandparents who cannot or should not attend in-person groups due to risks associated with COVID-19. Online support groups are offered in a variety of formats including discussion meetings via teleconferencing groups, chat and live technology. For more information on the program, contact Latorius Adams at 910-814-6075 or log onto the Harnett County Division on Aging website at www.harnett.org/aging.