Do You Know Any Cat Daddies?

David Giovanni is living on the streets of New York, determined to stay together with his beloved cat Lucky. When he’s finally granted a spot in a transitional housing facility that accepts cats, the COVID-19 pandemic and a devastating medical diagnosis puts his future together with Lucky in doubt. David’s journey is interspersed with portraits of other “cat dads” from all over the country and some who struggle to navigate the unprecedented events of 2020 with their little furry friends. They include a group of firefighters, a stunt man, a truck driver, a Bay Area tech worker, a schoolteacher whose cat becomes a viral sensation, and an actor/Instagram influencer. These men couldn’t be more different, but they share an unconditional love of their beloved pets. Cat Daddies is a refreshing and timely exploration of modern masculinity and the unlikely bond between man and cat. KIDS FIRST! Film Critic Ethan P. comments, “I like the documentary Cat Daddies because it documents different cat adoptions or rescues, especially by men, and each one of their stories is a heartwarming story that touches you. I liked seeing each one of these men and their cats bond and their journey.” See his full review below.

I like the documentary Cat Daddies because it documents different cat adoptions or rescues, especially by men, and each one of their stories is a heartwarming story that touches you. I liked seeing each one of these men and their cats bond and their journey. 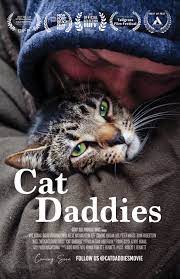 This documentary is about different men or “cat dads” rescuing or adopting kittens from the streets. The film takes place in different states including California, New York, South Carolina, and Arizona. You will enjoy different stories of an actor who adopts four cats and becomes an influencer by posting about his cats on social media, a fireman who adopts a cat that now is part of their crew, and more. This film also documents the journey of a homeless man named David who suffers from cancer, and his cat Lucky. David became so selfless that it takes him a lot of thinking to go take care of his cancer in order to not leave Lucky unattended. Cats, like dogs, are good companions and can be supportive animals as well. Cats can feel when you are sad and they express their love in different ways from dogs, but that doesn’t mean the love they offer is less. We often see movies or stories of men and their dogs, but have you ever watched a heartwarming movie or film about men and their cats? Well, this is your chance! My favorite story is David’s. His love for his cat, Lucky, is bigger than himself. Before David admits himself to the hospital to take care of his tumor, he makes sure Lucky is in good hands. He misses Lucky terribly while he’s at the hospital. This film is a reminder that if you are looking to adopt a pet, remember there are plenty of adorable cats and dogs in shelters waiting for a warm, cozy, and loving home. Why go to pet stores and buy a pet when you can rescue them? At the end of your journey, you will ask yourself, “Who rescued whom?”

The message of this film is about how men express their masculinity as they melt with love and compassion over cats. 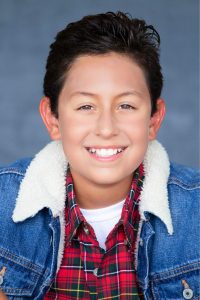 I give Cat Daddies 5 out of 5 stars and recommend it for ages 5 to 18, plus adults. It is playing now at select film festivals, so look for it. By Ethan P., KIDS FIRST! Film Critic, age 13