I was recently contacted by a set of grandparents who wanted my advice about resources and suggestions geared to grandparents with college-age grandchildren, specifically regarding the sharp increase in anxiety, depression, and suicides among college students, especially during COVID -19 (1), (2), (3).

I began my response by acknowledging that their concern about increasing rates of depression and suicides among college students is warranted. The statistics are alarming!

According to the American College Health Association (ACHA), the suicide rate among young adults ages 15–24 has tripled since the 1950s, and suicide is currently the second most common cause of death among college students [unintentional accidental deaths remain the leading cause] …

In a recent study published in Depression and Anxiety of more than 67,000 college students from more than 100 institutions, one in five students have had thoughts of suicide, with 9% making an attempt and nearly 20% reporting self-injury. One in four students reported being diagnosed with a mental illness.

A critical first step in trying to address the problems of depression, anxiety, and depression among college students is to arm oneself with information about possible causes, solutions, and treatments. I recommend a WGBH series, available in both written and video formats. Other resources include: [1], [2], and [3].

Be a frontline resource

To be a frontline resource means that you have committed to be immediately available if called upon. I encourage grandparents who are trying to position themselves as a frontline resource to their grandchildren who are headed to, or are already in college, that they, the grandparents, should try to make decisions that respect the wishes of the parents. This entails understanding the kinds of parent-grandparent relationships in place.

For example, some grandparents will:

Suggested actions to be a frontline resource

There are several specific actions grandparents can take to be a frontline resource in the event that their grandchildren in college run into any difficulties or challenges. The practicality of each depends on the grandchildren’s comfort levels, as well as on availability and finances. Grandparents:

These suggestions for grandparental involvement are not meant to replace parental involvement. Helping college students deal with mental health issues and/or other campus challenges effectively needs to be the goal, and depending on the circumstances, college students may feel that their parents or grandparents, either together, or separately, can provide them the help they need for a particular situation at a particular time.

The ideal situation is that the parents wholeheartedly approve of the grandparents being a frontline resource for the grandchildren, but if that approval is not forthcoming, the grandparents may elect to help their grandchildren without that approval and suffer the consequences of fractured parent-grandparent relationships. Most college students are of the majority age, so it will be up to them as legal adults to decide whom to contact in times of need.

Karen L. Rancourt, Ph.D., writes an advice column for parents and grandparents at Mommybites.com. Her most recent book is, It’s All About Relationships: New Ways to Make Them Healthy and Fulfilling, at Home and at Work. 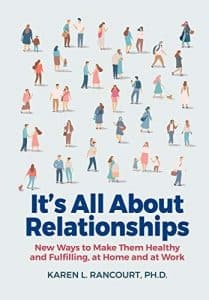