Backroads of Paradise: A Journey to Rediscover Old Florida

I grew up in Miami in the 1950s, and I remember it as a paradise.  Us kids could run barefoot all day, and pull mangos, bananas, oranges, and berries from our backyard trees. We always had water to play in…the ocean or natural fresh water springs, and we played outside all year. Something you may not see so much now; at age 10 or less we would ride the bus downtown for a movie and lunch at Woolworth, without an adult or a cell phone…just a dime to call home if we had to.

But change came and by the early 1970s, Miami was experiencing an explosion in population, traffic, and crime.  Developers and politicians flaunted their disregard for nature as they literally “paved paradise and put up a parking lot”. In 1972 I migrated to  Orlando. Walt Disney had chosen this quiet little central Florida city for his next theme park, which opened the year I arrived.

That city and its people were very good to me for 28 years. My family and business flourished, but Orlando outgrew itself just as Miami had.  Fortunately, I discovered my forever home on the west coast in Gulfport, FL. where I’ve lived with my husband on beautiful Boca Ciega Bay for 25 years.

All this preamble is to tell you that I love Florida…the natural, beautiful Florida, especially, so I was very excited to discover a special book, Backroads of Paradise – A Journey to rediscover old Florida by Cathy Salustri. Cathy is now married and co-owner of The Gabber (Florida’s oldest independent weekly newspaper) with her husband Barry Loper. 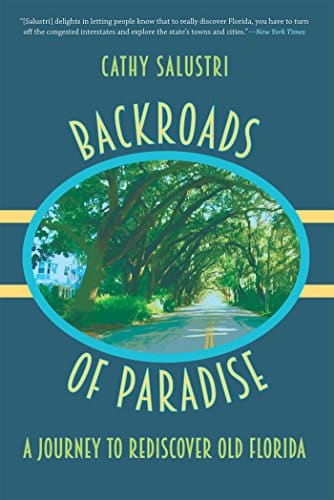 After reading this book, I can’t wait to take some time to explore the northern part of Florida.

To learn more, please enjoy this in-depth review of Backroads of Paradise by Roger Abrams:

“Salustri’s guide offers a delightful trip around and through this curious state.”

Florida is classic America, a model of heterogeneity. North Florida and the Panhandle are Southern in culture and politics. South Florida from Dade County to the Palm Beaches is populated by resettled transplants from the Northeast and from Latin America. Central Florida, in particular the Gulf Coast, has a very Midwestern feel and orientation. Orlando, of course, is a bewildering playground for children of all ages, especially in the domains of the great murine named Mickey. There are no typical Floridians.

As Cathy Salustri, explains in her splendid guide to the back roads of Florida, much of the Sunshine State has succumbed to the lure of concrete. The interstates run north, south, east, and west, and are always under construction because there is no winter respite. The state highways and county roads are lined by strip shopping centers and national chain stores.

What Salustri sets out to do—and accomplishes well—is to find those parts of the state that have preserved what the natives refer to as “old Florida.” Inspired by travel writers like Bill Bryson, Salustri combines her travelogue with tidbits of history, local sociology, and personal anecdote. It is fun to ride along with her.

In 1939, the Federal Writers’ Project, part of FDR’s Works Progress Administration, published tour books of every state. Salustri uses Florida: A Guide to the Southernmost State as her loadstar, quoting liberally from the guide to demonstrate how much has changed and how much has remained the same.

No state in the Union has remained unaffected over the 78-year span, but few have been transformed as much as Florida. The state has experienced an in-migration of a thousand new permanent residents a day. The latest tally shows that well over 100 million visitors come to Florida for vacation each year.

Salustri bemoans the native charm that Florida has lost. She follows 21 treks that the 1939 Guide had followed, avoiding at all costs the major roadways and the well-known attractions. Few visitors leave the interstates to find the treasures and adventures she explores.

It is hard to blame the tourists, many from Europe and points beyond, for heading to Orlando. Every panorama in the Magic Kingdom looks both perfect and real. The walls of the princess’s castle look like they are made of brick, but the brick detail was painted onto the plaster and fiberglass as a finishing touch. The joy experienced by the guests, however, is not artificial, and the Florida economy depends on their patronage.

Salustri is an obvious fan of Florida’s remarkable flora and fauna. In her chapters, alligators, trees, and flowers conquer concrete. Coastal Florida maintains its original sandy beaches, but a block away the ubiquitous Dollar General stores now reign. Only the settlements of the Panhandle and those that run down the spine of the peninsula preserve their small-town flavor.

Florida is an agricultural state with thriving and well-known cattle and citrus businesses. Salustri points us to other hidden treasures. The oysters and clams of the northern Gulf coast offer a good reason to leave I-75 on a gustatory quest. The Panhandle has miles of cotton fields giving support to the claim that this outcropping of Florida is really southern Alabama. The fishing industry provides its daily catch to hungry residents and visitors alike.

Salustri’s guide offers a delightful trip around and through this curious state. There are no villains in this tale, except perhaps the sugar industry that is despoiling the Everglades. Florida is a success story despite its flaws. For those who seek adventure and history, Salustri’s book is the foremost Baedeker.

ABOUT THE REVIEWER – Roger Abrams

Abram’s most recent of six books is on the business and history of sports is Playing Tough: The World of Sports and Politics. He is a leading authority on sports and labor law and legal education has served as a salary arbitrator for major league baseball as well as in other realms and is Richardson Professor of Law at Northeastern University. He is a resident of Florida and the permanent labor arbitrator at Walt Disney World.